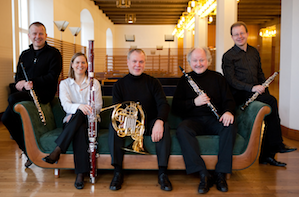 Berlin Philharmonic Wind Quintet: As Good As It Gets

A huge imbalance in the Musical Universe was corrected on Friday, when the Berlin Philharmonic Wind Quintet, one of the foremost wind quintets in the world, came to San Francisco State University for a workshop and a concert at the McKenna Theatre, presented by the SFSU Morrison Artists Series.

The illustrious ensemble, founded in 1988 when maestro Herbert von Karajan was still in charge at the Berlin Philharmonic Orchestra, has toured the United States many times during the quarter century of its existence, but for some reason never made it to San Francisco.

Here are five exquisite musicians who can play anything you put in front of them, and do it extremely well and with wholehearted fervor. Four of them are the original founders of the BPWQ. (Reinhard joined the group in 2009.)

The program contained Nielsen’s Quintet Op. 43 (1922), Milhaud’s La Cheminée de roi René (King René’s Chimney, 1939), as well as the Quintet by Finnish composer Kalevi Aho from 2006. There was also an arrangement by flutist Hasel of the Fantasy for Mechanical Organ, K. 608 (1791) by Mozart, which opened the concert.

Since Mozart never wrote specifically for wind quintet, playing arrangements is the only way for the BPWQ to perform his music, but I couldn’t shake the impression that the composer would have written something completely different than this, had he been aware of the possibilities of a modern wind quintet.

Nonetheless, the Mozart arrangement was a nice introduction to the sound quality of the Berliners, which is just about as good as it gets and the obvious result of many years of musical cooperation and companionship.

Kalevi Aho (b. 1949) is one of Finland’s foremost contemporary composers and a prolific producer of large-scale works, including 16 symphonies, 20 concertos, five operas, vocal works, and chamber music. I am sorry to say that this Quintet was my first introduction to his music but I can see why Aho has been described as one of Finland’s best-kept musical secrets.

By almost completely ignoring the existing rules and customs of scoring a wind quintet, Aho created music full of vivid imagery. A frantic Agitato in the first movement changed abruptly to a lyrical section, and in the following movements Aho summoned melodies that sound like transcribed jazz improvisation, parts from a soundtrack that could be called “Birds of the Arctic,” and a manic mish-mash of rhythmic outbursts in the third movement.

The final Andante con tristezza starts with oboe, clarinet, and flute responding from behind the stage to languid, intertwined melodies by horn and bassoon, who have remained there. When, after a short musical intermezzo with all five musicians on stage, the stately interplay resumes with the on/off stage positions reversed, the music is the same as before, but it sounds remarkably different.

Darius Milhaud (1892-1974) wrote his wind quintet about 10 years before Kalevi Aho was born. His approach to instrumentation is a more traditional one and, unlike Aho, he uses a more natural flow to structure and combine his musical ideas.

Like almost every one of Milhaud’s pieces, the quintet is playful, witty, charming, cute and lovely — and borderline fluffy, but it very tastefully never crosses that line. The Nielsen quintet from 1922, by contrast, has a musical horizon of a very different color. Its initial starkness has atmosphere and character, and the impression is that of an extremely well-sculpted, academic piece that is slightly impersonal, although there is more warmth and temperament further on. But the music never gets quite as sunny as Milhaud’s.

Two brief encores, Blues from Gunther Schuller and a Tango by Júlio Medaglia concluded the performance.