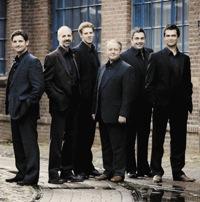 Bewitching Singing From Across the Pond

David Bratman on February 20, 2010
There wasn’t any doubt which piece on their San Francisco Performances program that the King’s Singers had really come to Herbst Theatre to perform on Wednesday. It was the premiere of Tres mitos de mi tierra (Three myths of my land), by Berkeley-native composer Gabriela Lena Frank.

Most works for a small group of unaccompanied solo singers are fairly short little pieces. By these customary standards, Frank has composed the Ring Cycle of the genre. Each of the three movements is a large, complex composition of half a dozen long, elaborate verses by itself. Put them all together, and it’s 20 minutes straight, seeming longer because of how much content is packed in there, for all six singers — two countertenors, one tenor, two baritones, and a bass — with hardly a break for any, and not a sip of water or a throat-clearing in sight.

This would have been amazing enough, had Frank written merely a minimalist om. She is not that kind of composer. Even the slower central song is thoroughly busy, written with awesome detail and a thorough attention to her text. The precision of the singers’ enunciation was vital here. Lyrics and music were inspired by the South American Andean portion of Frank’s multicultural ancestry. Her text, though in English, has many Spanish words and phrases inserted, and is all written, she tells us, with “the rhythms and cadences of Spanish.”

The infusion is complete. Throughout the third song, the elaborate courting call of a man to a bewitching woman, the text is counterpointed with the word “Hechicera” (sorceress), both the title of the song and the word he uses to describe her at the beginning. The text and the repeated word intertwine in the parts, forming an elaborate multilayered conversation. The first song, “Travel Song,” is built similarly, with entrances cascading over each other, parallel word phrasing in successive lines reflected in repeated musical phrasing, and the voices suddenly coming together into a single line at critical points.

Frank’s musical style is as eclectic and wide-ranging as her word-setting: South American rhythms and vocal styles, combining the traditions of the Spanish- and Quechua-speaking peoples, to be sure. Other echoes come in, as well, intended or not. I heard a sense of blues in Stephen Connolly’s bass solo in the second song, “Himno del pinto anónimo”; elsewhere there was a touch of sea chantey and even a moment where the repeated hechicera sounded almost like a quotation from “Que sera, sera.”

Preceding this, we had a set of Renaissance madrigals: Elizabethan ones by Thomas Weelkes and John Bennet, and continental ones by Claudio Monteverdi and Heinrich Schütz. It made an appropriate juxtaposition, and not just because the madrigals were selected for lyrics with mythological themes. Whether music like this inspired Frank or not, the same kind of interweaving of vocal lines, carrying the words over and around each other, was used in these madrigals, particularly the English ones. And Monteverdi singles out the repeated cry “Ahi” in his “Si, ch’io vorrei morire” in the same way that Frank emphasizes selected words. The context of the madrigals gave us the right ears to hear Tres mitos with.

Throughout the madrigals and the Frank work, the King’s Singers sounded as if these works were made for them. Which the latter, in fact, was: They commissioned it with the assistance of a volunteer group bearing the delightful name of the Minnesota Commissioning Club. Frank must have had this ensemble’s particular qualities in mind: their distinctively British humble self-confidence, absolutely precise BBC-announcer enunciation, determination to pronounce any foreign word in an authentic accent, and ability to handle any tongue-twister or independently moving vocal line. Weelkes did not choose the most euphonious set of phonemes in beginning one of his madrigals with “Thule, the period of cosmography”; the King’s Singers made it sweet nonetheless.

The program was organized on a pops-concert model, with all these heavier works in the first half, leaving the second half for something lighter. This being Ash Wednesday, the singers were a bit late in offering Camille Saint-Saëns’ Saltarelle, Op. 74, setting a poem by Émile Deschamps encouraging the audience to have a lively Mardi Gras. If the advice was slightly stale, the music wasn’t. Saint-Saëns leaps with characteristic agility between fast dancing rhythms and slow religious chant, depending on the import of the lyrics. The setting is less ornate than the music we heard earlier, and intended for a mass male chorus, yet it too benefited from the precision and care that the solo voices gave to this four-part composition. The singers brought out the shifts and contrasts with a clarity I have not heard in choral performance of this work.

The program concluded by leaving the classical realm altogether for half a dozen folk and pop songs — because this was a King’s Singers concert, and they always do that. Here the best offerings were the simplest. Philip Lawson, one of the group’s baritones, wrote the plain, chordal arrangements of the English folk song The Water Is Wide and Billy Joel’s Lullabye (Goodnight, My Angel), the latter exceeding the composer’s original recording in smoothness and sheer beauty. In other songs in more complex arrangements, however, the singers chose to goof off. This was palatable enough in a novelty hit like Randy Newman’s Short People, their encore, but anybody who actually likes Chanson d’Amour by Wayne Shanklin (best known in recordings by The Lettermen and Manhattan Transfer) would only be embarrassed by the way Connolly croaked out the “ra da da da da” backing line in an increasingly froglike manner, facially mugging all the way. Such great vocal powers as those of the King’s Singers should only be used for good.