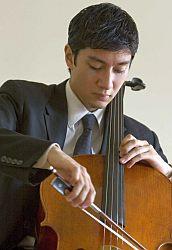 Heuwell Tircuit on January 13, 2009
Disappointed that his relatively bland Third Symphony had won the Pulitzer Prize in 1947, Charles Ives called awards "badges of mediocrity." Sometimes that's true, though not always. Cellist David Requiro, winner of the 2008 Naumburg Award, certainly proved that much Sunday evening in Herbst Theatre, presented by San Francisco Performances, when he played a gloriously musical as well as technically adroit program of major — and not so major — repertoire. With pinpoint help from pianist Elizabeth DeMio, the first half of Requiro's program featured Beethoven's Variations on Mozart's "Bei Männern, welche Leibe fühlen" from The Magic Flute, WoO 46; Debussy's Cello Sonata in D Minor; and William Bolcom's Capriccio (1985). Following intermission, we heard Brahms' Sonata No. 2 in F Major, Op. 99, and three works by cellist-composer Gaspar Cassadó: Requiebros, Lamento de Boabdil, and Danse du Diable Vert. Besides the Naumburg, the 23-year-old Oakland native has won a number of prizes and awards, including first place in Japan's Cassadó International Cello Competition, as well as a number of others around this country. Clearly, they're all been deserved. Requiro displayed a keen sense of rhythmic sensibility, especially as regards the subtle use of rubato — an element so elegant that you'd hardly notice that he's used it at all. His dexterity and intonation were super class, and the balances between him and pianist DeMio were superb throughout. Requiro was also uncommonly keen in achieving just the right timbres, rounded and resonant without ever slipping into soupiness. Even his light pizzicato playing in the Debussy "sang," minus any hint of harshness. In those aspects, Requiro produced the impression that we listeners were hearing a fine guitarist at work, rather than a plucked cello. Remarkable! Brahms' great Second Sonata is something of a monster to play, for both cellist and pianist. It's more like a double concerto without orchestra. Fluent in tempos, flawless in dexterity, Requiro and DeMio were models of fine ensemble-playing throughout, something not easy to achieve in this score, since the piano writing is so thick. You'd think they'd been playing together for 50 years or more. They made their work seem so effortless that I can only assume they are rehearsal devils. (Forgive me if I digress, but I can't resist telling my favorite Brahms story: The composer was in the habit of leaving Vienna for the mountains during the summer, usually bound for small villages where he could work in peace. The summer that he spent finishing the Cello Sonata No. 2, he was in Switzerland, where there was a small hotel with a piano trio playing dinner background music. Wanting to check the balances, Brahms asked the trio's provincial cellist to try reading the virtuoso Sonata with him. The story goes that at one point the cellist asked Brahms if he'd play more quietly, complaining, "Maestro, I can't hear myself." To which Brahms replied simply, "Lucky for you.")

Debussy's Cello Sonata — technically his "Sonata No. 1" — began what should have been a cycle of six sonatas, each scored for different combinations of instruments. Alas, Debussy died with only the first three completed: No. 1 for cello and piano; No. 2 for flute, viola, and harp; and No. 3 for violin and piano. (For what it's worth: No. 4 was planned for oboe, horn, and harpsichord; No. 5 for clarinet, horn, trumpet, and piano; and No. 6 for solo piano with chamber ensemble support.) Spanish colors and rhythmic patterns were never far from Debussy's palette. The Cello Sonata is chock full of them. Indeed, the second movement, a Serenade, sounds like a guitar piece, especially since the cellist is playing pizzicatos most of the time, while the main theme of the third movement's texture could almost be an aria from Bizet's Carmen. For all that, the piece is lighthearted and bright, despite its D-minor home base. Beethoven's seven Mozart Variations date from 1801, the time of the Second Symphony and the Third Piano Concerto. Oddly, he gave the work no opus number, hence the WoO ("work without opus number"). Obviously, he didn't consider it major. There's nothing of a barnstorming character in it; rather, it's a well-made, entertaining set of studies in brevity, from which Requiro extracted every last drop of charm. Minor, yes, but a fun way to open a program. Balcom's four-movement Capriccio is laid out in the manner of a sonatina, including the final two movements based on Latin America styles, notably the Tango parody in the finale. The set is well put together, but apparently designed primarily to give no offense. (Read: It's lightly academic in a way that suggests it was more willed into existence than inspired.) It passed the time, convincing only by the musicianship of the two players.

The three Spanish pieces of Gaspar Cassadó (1897-1966) are idiomatic virtuoso cello works, as one should expect from an outstanding virtuoso cellist-composer. Much in his scores sounds like genuflections to his composition teachers, Falla and Ravel, and they are none the worse for that. Cassadó was something like a Spanish Fritz Kreisler. Although he's still much respected by professionals (there's even a Cassadó Society in Japan), he has generally faded from view, which is a pity. Although Cassadó's reputation as composer has paled, he was once highly regarded as a composer of concertos, an oratorio, and chamber music. Yet today it's his cello repertory that remains in modest use, as well as memories of his active recording career, particularly those with the trio he formed with Yehudi Menuhin and pianist Louis Kentner. Requiro played Cassadó's dizzying Dance of the Green Devil fearlessly, with the kind of sonic splendor that must have dazzled the Japanese judges as much as it did Sunday's audience — and me! The curious element of the evening was Requiro's choice of an encore. Rather than playing a familiar light piece to send 'em home smiling, he dug deep into obscurity to find the Soviets' Sulkhan Tsintsadze's Arobnaya, that Georgian composer's basic study in Socialist Realism. (Read: blandly soulful.) Frankly, I'd never heard of him and only found the title thanks to San Francisco Performances' Karen Hershenson. This was the 10th time that San Francisco Performances has presented a Naumburg winner, as sponsored by Mrs. Bella Ma Chiu. It's a wonderful gift to the community, offering a combination of major discoveries in the way of the finest young talent. Long may they continue.
Heuwell Tircuit is a composer, performer, and writer who was chief writer for Gramophone Japan and for 21 years a music reviewer for the San Francisco Chronicle. He wrote previously for Chicago American and the Asahi Evening News.

Stephen Sondheim’s Death Mourned by Legions of His Fans

Looking Back and Ahead As SF Opera Prepares to Turn 100