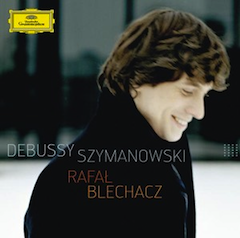 The new CD recorded by the young Polish pianist Rafal Blechacz and released by Deutsche Grammophon is devoted to two composers of quite dissimilar styles: Claude Debussy (1862–1918) and Karol Szymanowski (1882–1937). To be sure, Szymanowski later fell under the spell of musical impressionism, but in the two early works featured on this disc, his writing was as different from that of Debussy’s as possible.

All the music performed here was written within the same decade, early in the 20th century, and most of it is marked by Baroque influences, yet this is where resemblance stops. Debussy’s textural transparency and lucid modality stem from his belief that “French music is clearness, elegance, simple and natural declamation.” There is a tangible impact of Baroque harpsichordists, particularly the French, in Debussy’s limpidly precise piano writing. Szymanowski, at least in this early stage of his career, preferred jam-packed, chromatically overwrought sonorities and fugal intricacies characteristic of organ music of the German Baroque. Such a dichotomy might be tricky for a performer, though Blechacz handles both styles with confidence, creating gripping accounts, each in its own fashion.

After 1890, Debussy had not written any piano music for 10 years. In 1901 he penned a piano suite with the unassuming title Pour le Piano (For the piano). The suite became a major milestone in piano literature, one of the more important contributions to the genre of piano suite after Schumann. Its three movements bear Baroque titles: “Prélude,” “Sarabande,” and “Toccata.” Blechacz offers an impeccable rendition of the suite — an improvisatory, unrestrained, and utterly finished flow in the “Prélude,” beautifully voiced chords and gently engaging melodic lines in the “Sarabande,” and clarity, flexibility, and propulsiveness in the “Toccata,” all combined with superb tonal control.

Debussy’s Estampes (Engravings) is yet another suite, written two years after Pour le Piano, and consisting this time of three contrasting character pieces: “Pagodes” (Pagodas), “La Soirée dans Grenade” (The evening in Granada), and “Jardins sous la Pluie” (Gardens in the rain). About four years ago, I heard Blechacz play the Estampes in a recital. Curiously, the impressions he left then and now are diametrically opposite. Then, “Pagodas” and “Jardins” lacked poetry and variety of colors, while “La Soirée” came out irresistibly seductive. Now, on the contrary, the first and last pieces sparkle with luminous effects and a wide range of tonal shadings.

“La Soirée dans Grenade,” however, does not fare as well in this recording. The Spanish composer Manuel de Falla proclaimed that “La Soirée” contained “the most concentrated atmosphere of Andalusia,” even though not a single bar of this music was borrowed from Spanish folklore. (By the way, Debussy never visited Granada; his only direct contact with Spain was a brief sojourn to San Sebastian.) In a certain sense, this sultry atmosphere is created by a languid tempo, which Debussy prescribes at the beginning of the score: “Start slowly in a nonchalantly graceful rhythm.” The composer also recorded the piece a few years after its publication; in his performance, “La Soirée” goes on for 5½ minutes. Blechacz dispenses with the piece hurriedly, in just over 4. At such a brusque pace, the work may perhaps convey some sense of urgency, though none of its innate sensuality.

The last of the Debussy selections, L’Isle joyeuse (The isle of joy), was composed in 1904. It is one of his most exuberant, extroverted creations. The piano writing here, unlike the previous works, is more orchestral in nature, which suits Blechacz just fine. He presents an utterly compelling reading: splashy, colorful, and almost violent in its concentrated energy.

Szymanowski’s early works, the Prelude and Fugue in C-sharp Minor (1905–9) and the Sonata in C Minor, Op. 8 (1903–4), are far less known outside Poland than the compositions contained in the first half of the disc. For the listener who is not quite familiar with the music, Blechacz steps up as a persuasive proponent. He makes the highly virtuosic and polyphonically complex works darkly passionate, brimming with biting harmonies and boiling intensity.

For this disc, Blechacz has been granted a prestigious ECHO award by the Deutsche Phono-Akademie (Solo Piano Recording of the Year, 20th/21st Century): a well-deserved distinction.