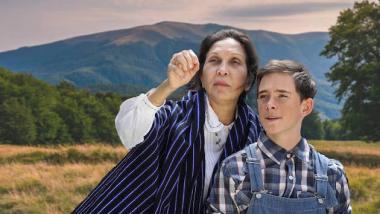 Bless Me, Ultima Makes it to the Operatic Stage Thanks to Opera Cultura

Several factors worked against the success of Opera Cultura’s performance of Héctor J. Armienta’s opera Bless Me, Ultima based on Rudolfo Anaya’s novel of the same name: the novel is difficult to stage, the acoustics of the Mexican Heritage Theater challenged the singers, and underfunding required that the production cut corners. Despite these obstacles, the opera offered grand moments to Sunday’s receptive audience in San José, especially for those familiar with Anaya’s novel.

Composer and librettist Armienta worked “in consultation with Rudolfo Anaya” to create the libretto that focuses on the dynamic between Anthony and Ultima, a young man finding his way in post-World War II New Mexico and an aging healer and wise woman who lives with Anthony’s family. Armienta deploys his harmonic capabilities to score climactic moments between these two characters and on Sunday the orchestra made these moments come alive: Wagnerian textures, Coplandian sonorities, and Philip Glass-like undulations combined in pieces such as “We are born into this world,” a superior duet between Anthony and Ultima in Act Two.

Two of the singers also crafted memorable moments in the performance. Alexandra Anderson (in the role of Anthony’s mother, Maria Marez) and Roberto Perlas Gomez (as the antagonist, Tenorio) successfully filled the theater with their sonorously projected voices. Anderson and Gomez also stood out in their acting, effectively embracing their roles and pulling the audience into the story.

Despite these successes, the efficacy of Anaya’s novel rests on devices that challenge and even resist operatic adaptation. In the novel, Anaya engages readers with vividly poetic descriptions, plot-driving dreams, supernatural-acting animals, a host of well-developed characters, frequent location changes with enlivening details, and intimate, first-person narration of Anthony’s inner thoughts.

None of these offers an easy translation into portrayal onstage or in song. How, for example, do you transform lines like “... the second volley of shots from the bridge sounded, but this time they sounded like a great whirling of wings, like pigeons swirling to roost on the church top” onto the opera stage? In making concessions to build an opera out of the novel, the result moved too fast and felt too thin. That’s understandable, since the opera had to leave out a myriad of characters and character development, squishing multiple independent scenes into simultaneous action, and potentially confusing audience members unfamiliar with the novel.

I would love to see Bless Me, Ultima again, but performed with more resources: choosing a space designed for the audibility of unamplified voices, working with singers on acting, perhaps reimagining the opera as rich, abstracted vignettes from the novel rather than a necessarily diluted version of the storyline. Or, alternatively this version could be expanded to allow time for character development.

Barring an overhaul, the music could be arranged for specific voices and spaces. For example, developing singer Nicholas McKee (as Anthony) had some wonderful moments but was frequently overpowered by the orchestra (as was Flora Mendoza, performing The Owl). Could the orchestral writing be adapted to give them less instrumental competition or should the singers just be miked?

As it stands, Opera Cultura and composer Armienta have done a beautiful thing for the community and in drawing more attention to Anaya’s captivating novel. Increased support for their efforts would result in even better performances in the future.

Soprano Susan Narucki and her collaborators drag opera out of the ivory tower and into the streets.

Since the 1930s, the city of Saint Francis has hosted a burgeoning Mexican music scene. SFCV's Jesse Hamlin introduces you to the rich panoply spreading forth from the Mission District and elsewhere in the Bay Area.