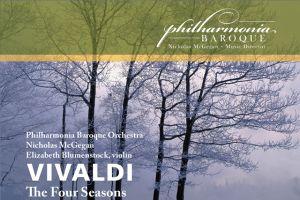 The pictorial ante on Vivaldi’s Four Seasons was upped a couple of decades ago, by Nigel Kennedy and Il Giardino Armonico (on modern and period instruments, respectively), and for a while it was impossible to find a performance in which the barking dog of “Spring’s” middle movement wasn’t a rottweiler, or the rain of “Winter’s” middle movement not hail. Since then, the mood has changed, and more sedate, “dignified,” and — dare I say it? — dullish performances are the norm again.

So it’s a great pleasure to find Elizabeth Blumenstock, Nicholas McGegan, and Philharmonia Baroque Orchestra occupying what seemed barren middle ground. Theirs is a performance brimming with color, vitality, and imaginative interpretation of the programmatic cues in the music, but it’s not deliberately designed to shock. The one exception is the opening of “Winter,” which ought to provoke literal shivers in anyone with an ear. I can honestly say that I’ve never heard it played like that before. Every tone quivers (the trills that set in later in standard editions are there already in the first bar); everyone’s playing on the bridge; and the buildup to the soloist’s first entrance is positively frightening.

I’ve wondered sometimes whether lifelong Bay Area residents aren’t puzzled by “Summer.” What’s with the minor key and all this stormy weather? Believe it or not, folks, violent thunderstorms are part of summer just about anywhere else on the planet but where you live. On this CD the season is as vivid as I’ve ever heard it — the disconsolate birds (here, as in “Spring,” they’re almost visible), the heat, the rumbles of thunder, and then the tempest. And if you ask Blumenstock to provide a tempest, boy, will she deliver one. Stand back, and adjust your amplifier.

“Autumn’s” revelers are unusually tipsy, and the last-movement hunt is a valiant chase in which the prey often ups the tempo considerably. As for “Winter,” if all you ever see of snow is an occasional February weekend at Tahoe, this is what the real thing is like when you can’t drive away from it. But here, you can always turn back to “Spring,” a joyous performance whose energy and enthusiasm overflow everywhere. “Il cane che grida” (The barking dog) is loud, but not obnoxious. The last movement, with its musette-like accompaniment, is irresistible.

Throughout, there’s Blumenstock’s uncannily detailed articulation (sometimes I find myself wondering why we need Tourte-style bows, given what she can do with a Baroque one) plus her improvisational flair. Would that one violinist in a hundred could ornament like she does. PBO, meanwhile, sounds wonderful, whether imitating birds or dogs or brooks or thunder or merely accompanying.

The other two named concertos on the disc, “L’amoroso” and “Il favorito,” listeners acquainted with much Vivaldi will likely know. (The last movement of “Il favorito” is like the  “Autumn” finale's evil twin, with all the same rhythms and the same verve, only in the minor mode and subtly twisted.) Not so RV 375 in B-flat major. Barbara Quick’s notes here describe it as “rarely recorded”; I think that might actually be “only once before recorded,” by Giuliano Carmignola in 2000. That was announced as a premiere recording, and I’ve seen none since until now. It’s like the other concertos that Carmignola grouped with it: longish, various, a bit more like, say, Tartini than earlier Vivaldi — ornate, technically challenging, and repeatedly surprising. Even those who own the Carmignola are going to want this, for Blumenstock and PBO repeatedly out-tease, outdash, and outmaneuver him.