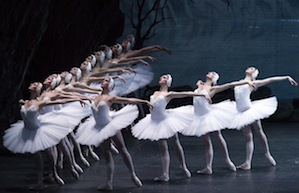 The Mariinsky Ballet and Orchestra, the company formerly known as the Kirov Ballet, has returned (after four years) to Cal Performances with a marvelous Swan Lake. Set to Tchaikovsky and choreographed by Marius Petipa and Lev Ivanov, a four-act version premiered in 1895 at the Mariinsky Theater.

The names change (the Kirov Ballet was in Leningrad, the Mariinsky Ballet’s home is St. Petersburg), the history changes (today the Mariinsky proudly takes credit for superstars Natalia Makarova, Rudolf Nureyev, and Mikhail Baryshnikov, who were branded non-persons and worse after they defected to the West from the Kirov and the Soviet Union).

The ballet’s ending, too, changed in Konstantin Sergeyev’s 1950 version, from sad to happy, with Prince Siegfried’s love for the captive white swan Odette restoring her to human form, promising the couple eternal bliss. (Look up Swan Lake’s multitudinous endings, varying from company to company all over the world, some winter night. Your head will do 32 fouettes.)

What doesn’t change is the company’s artistic lineage, and that’s a fact worth celebrating, which the crowd at Zellerbach Auditorium definitely did Wednesday night. Drawing most of the hoopla was the ballerina Ekaterina Kondaurova, 5 feet 8 inches of lithe perfection as Odette, but even more so as the treacherous Black Swan, Odile. Her Siegfried, the tall and handsome Danila Koruntsev, a company veteran, was an engaged partner with nicely shaped leaps and, let it be noted, very good hair. As the evil sorcerer Rothbart, Konstantin Zverev, garbed in close-fitting black tights with shiny, feathery wings on his arms, was an angular, active and relentless menace, his jetes arrow-sharp.

The Mariinsky Theatre Orchestra, which visited Cal Performances last year with a Tchaikovsky series conducted by Artistic Director Valery Gergiev, was led by the Indiana University-schooled Mikhail Agrest. The orchestra’s warmly emotive interpretation was burnished by the violin soloist Lyudmila Chaikovskaya; Alexander Ponomarev, cello, and — to these ears loveliest of all — Bozhena Chornak, harp.

The first of the six performances was not without its challenges. The stage floor was distractingly squeaky, and, judging from a couple of minor skids, a bit slick. Consequently there was an air of mild caution to Act 1, wherein Prince Siegfried marks his 21st birthday surrounded by beautifully costumed nobility and his mother, who, in a gaudy headdress suggesting a yacht under full sail, bemoans his unwedded state.

The singular exception to the demureness of the proceedings was the Jester, the compactly powerful Vasily Tkachenko. He lit up the stage with his antics — if you can call a series of soaring leaps and tidy landings, and endless grand pirouettes, perfectly placed, antics. He did have fine comic timing and he did steal the show, which is not called Jester Lake or Swan Jester — but let’s not be picky. He was a delight. Ekaterina Ivannikova’s gamin charm highlighted the pas de trois. Andrey Yakovlev was a nicely potted Tutor. The corps of festive couples seemed almost too big for the stage, and yet everyone got where they needed to go in fine style.

If you want to see a literal corps de ballet, or body of the ballet, you have to see the Mariinsky. It is one body and one singular sensation

If you want to see a literal corps de ballet, or body of the ballet, you have to see the Mariinsky. It is one body and one singular sensation, offering the precise placement and lovely deployment of arms, hands, feet, heads, and of course legs, in motion as well as in stillness. In snowy white tutus, they protect their queen, Odette, from Siegfried, come hunting with bow and arrow, his birthday present. He finds her. They dance. She resists, fends him off, backs away. But finally, she yields.

In their pas de deux and in her solo, Kondaurova’s Odette seems still in the process of dramatic formation, but technically it was lovely. She has marvelous plasticity in her arms, shoulders and neck, which simply means that she looks like a swan. She understands repose. Her extensions are a marvel even in an era where beyond 180 degrees is commonplace for an arabesque penche. She looks supple and unforced.

Whatever hesitancy her Odette displays is completely swept aside in Act 3, as Odile comes to the palace, in black tutu and fiery-red accented headdress, escorted by the treacherous Rothbart, now in a cape of red. Kondaurova’s Odile is a wonder — deceptive, fiery, seductive, mercurial, and capable of executing those plunging penches, her free leg firing straight up like a rocket, with no sign of strain whatever.

The corps of men and women outdid themselves. Nobody pulls off character dances — especially the Mazurka — the way the Russians do.

She is demonic intensity on steroids. Her fouettes were, of course, well beyond 32, since every third one was a triple. Siegfried’s solo was fine, culminating in a series of barrel turns. He plighted his troth, betraying Odett and then had his heart broken as Odile, her face alight with vengeance, scattered the bouquet he’d given her, their white blossoms sent flying.

And here as in Act 1, the corps of men and women outdid themselves. Nobody pulls off character dances — especially the Mazurka — the way the Russians do. The opulent sets and costumes were designed, respectively, by Igor Ivanov and Galina Solovieva.

You might want to eat before the show, rather than after, since it’s nearly three and a half hours long. Act 4, which can sometimes feel like an eternity, does not here. In its stunning deployment of the swans, here augmented with six in black, it fulfills the notion of a community, even if it’s a fanciful one. It also has a moment when Rothbart is a total brute, grabbing Odette and bending her backwards as he twirls her around as you might if you were throttling a chicken for dinner. She collapses, all but hidden from view. Siegfried, though, finds her. She rises, and they again move through a hesitant courtship, she backing away once, then twice. After all, he has just broken her heart, and Rothbart has just nearly killed her. But their love prevails. The music swells, the curtain falls, the cheers begin.