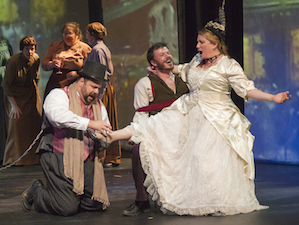 Going to the opera for the first time can be as memorable as a first kiss — especially if the lips are from Puccini. It’s no wonder, then, that the Livermore Valley Opera is making La bohème available to East-East Bay patrons. Saturday night, most left the performance with lipstick on their cheeks.

This beloved opera can be handled in chamber-opera style in three of its four acts, yet Act 2 poses a challenge for regional productions, since big-city companies can seem to put the entire population of Paris onstage and wend a marching band through it to boot. Livermore Valley left the visual part of the band to the imagination, but still was able to mount a believable version of the act. More important, it cast reliable singers in the lead roles to carry the other acts. No wincing at wrong notes had to mar the experience for attendees, and the acting and blocking ranged from fine to acceptable.

The unique aspect to this production is the vocal power of baritone Eugene Brancoveanu, who at full volume effortlessly shook the rafters of the Bankhead Theater. His glorious instrument presents a challenge of integration especially in this ensemble with less all-encompassing voices. Lack of balance was not sufficiently remedied by conductor Alexander Katsman or the stage director, even though (or because?) the director is Brancoveanu himself. The result was a surprisingly viable argument for a title change to the opera, from “The Bohemians” to “Marcello.”

Brancoveanu most pointedly put the focus on his character at the end of Act 3, where he decided to emerge into the snowy street, bare-chested, and then begin a short fistfight with paramour Musetta while David N. Gustafson (singing Rodolfo) and Marie Plette (Mimi), unobtrusively nestled together on a bench, sang “Senza rancor.” A different approach.

Plette’s Mimi was nicely sincere. For the most part, she wisely kept her vibrato in check. Gustafson’s Rodolfo was all the more sympathetic, with his having to put up with a more blowhardy Marcello than usual. When the couple were alone on stage at the end of Act 1 singing their love duet, and drifted offstage for perfectly executed high notes, there was magic in the air.

Bass-baritone Philip Skinner was an attractive Colline, shining in his “overcoat” aria in Act 4. Baritone Krassen Karagiozov sang well as the composer Schaunard, though he seemed slightly underpowered (especially considering the competition) and was made up to appear almost elderly. Kristin Clayton as Musetta was in good voice and was strong in the last two acts.

Her famous aria in Act 2 hit all the notes, but her acting was not femme fatale enough for my taste. The smaller parts were carried off without a hitch by Carl King, Alan Briones, and Jedediah da Roza, and the chorus fulfilled its duties in laudable fashion.

The most successful solution with Jean-François Revon’s set design was the projections showing Paris streets in Acts 2 and 3, with snowfall. The garret in the first act filled the stage almost too expansively, with the four bohemians given iron bunk beds to sleep on. A mattress was pulled off one of these to give Mimi her deathbed in Act 4.

There was a snafu with the stove in Act 1: It burst into fake flame too many seconds before Rodolfo could stick sheets from his play into it to provide kindling. (Why they were hanging on a laundry line, making them harder to get to in time in the large space, was a minor mystery.)

All in all, the Livermore Valley Opera has every right to be proud of this production.

Most of Brancoveanu’s directorial choices worked out well. Especially effective was the idea to have Musetta drag sugar daddy Alcindoro into Café Momus by a huge red ribbon in Act 2. Less so was to have the chorus line up at the front of the stage at the start of the act so that the bohemians could greet them as if it were a wedding reception. Also, I couldn’t understand why Marcello did his painting on a rather small canvas while lying on his top bunk, nor why, before meeting Mimi, Rodolfo stayed behind in Act 1 to read an article rather than write one.

Katsman’s orchestra of 23 musicians had a little trouble with the opening four bars of the opera, but played excellently for the rest of it, for the most part sounding like an ensemble twice its size. Katsman had the habit of lingering too long in the juiciest parts of the music, a problem with too many other conductors. Seams between sections (not the ones where pauses were deliberately taken for applause after arias) were too apparent at times. The opera, with two intermissions taken, after Acts 1 and 3, seemed very long at more than three hours. But, all in all, the Livermore Valley Opera has every right to be proud of this production.