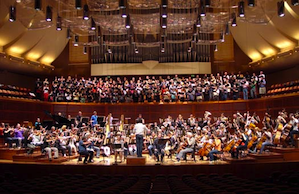 This week, Vladimir Jurowski made his debut, and under his baton the orchestra and Ragnar Bohlin's SFS Chorus were as powerful as Siberian tigers, as majestic as the Volga flooding at springtime.

The images are apt: Jurowski, the entire program, mezzo Elena Zaremba, baritone Andrey Breus, concertmaster Alexander Barantschik, and well over half the audience were all from Mother Russia and its environs.

At age 40, Jurowski is at the center of Europe's music scene, with top positions at the London Philharmonic, Glyndebourne Festival Opera, Orchestra of the Age of Enlightenment, and others. He exudes certainty and confidence, leads orchestra and singers with empathy, in supportive partnership. As other great conductors, he not only interprets and leads the music, but seems to channel its very essence.

At the heart of the concert, the sensation of the evening, was the U.S. premiere of Levon Atovmyan's arrangement of Prokofiev's Op. 116 oratorio, Ivan the Terrible, after the score for Sergei Eisenstein’s 1942-1945 film, which is at the confluence of two great monsters of history.

However terrible the first Tsar of All Russia might have been — butchering thousands of Russians (he wiped out Novgorod completely), and the people of Kazan, Astrakhan, Siberia, etc. — in building an empire of 1.5 million square miles, he couldn't hold a candle to Stalin's murder of millions.

And yet, in World War II, with the very existence of the country threatened, both Ivan Chetvyorty Vasilyevich and Iosif Vissarionovich Dzhugashvili were considered great heroes. So, with Stalin's support — at least for Part I — Eisenstein and Prokofiev were allowed to create this apotheosis to the 16th century conqueror. (Part 2 of the film wasn't shown until 1958.)

The music is varied, dramatic, appealing — and, unlike many of Prokofiev's works, not heard in every elevator. While it works wonderfully with the film, this is a soundtrack with a life of its own.

The chorus gets into the thick of things almost immediately with "Ivan and the Boyars," as the chorus seemingly transports the audience into the coronation of another tsar, Mussorgsky's Boris Godunov. The work segues into a part-incongruous/part-sensible, atmospheric "Song of the Beaver," a macabre lullaby sung by a woman to her simpleton son (shades of "Godunov" again), in a manner required by the composer "as though holding a cigarette between the lips, as through a comb." Zaremba, who sang in a dozen San Francisco Opera productions in recent years, filled the hall with a mighty sound, but also conveyed intimate aspects of the song.

Oprichniks (forerunners of the KGB) have a frenzied "secret police dance," and men of the SFS Chorus really went to town. The bouncy music has the blowout impact of Carmina Burana, but Prokofiev is superior to Orff in every way. Breus, snapping a whip (along with the men of the chorus), sings the wild text with scary abandon.

The "Swan" — for the wedding of Ivan and Anastasya — gives the sopranos and altos equal time, if not the same impact. Also, unlike the men's excellent diction, the women at times don't manage the same clarity. "The Fall of Kazan," Ivan’s conquest of the Tartars, has probably the most memorable tune of the score, remaining in the fore during the battle; the concluding section, "Glorification," is a hymn with elements of the work's opening music.

Through it all, the orchestra was on fire, right up there with some of the finest MTT/Mahler performances, however different the music might have been. Strings, woodwinds, brass, percussion — all mighty, committed, together.

The concert opened with a brief, beautiful Scriabin, his contemplative Reverie, and the orchestra produced a shimmering sound. For a golden oldie, Jurowski offered the Rachmaninov Piano Concerto No. 2, with Khatia Buniatishvili as soloist. This was the Georgian pianist's second appearance here, after her very successful debut in January with the Ravel Piano Concerto in G Major

She and the orchestra handled the grand warhorse well in the first and third movements, but the center Adagio was disappointing with its excessively slow tempo and sense of enervation. What the program calls "imbued with a sense of reverie" sounded to me a miscalculation, leading to preciousness. Was it the conductor's doing or the pianist's? Hard to say, and chances are repetitions of the concert Friday and Saturday may turn out differently ... and better.