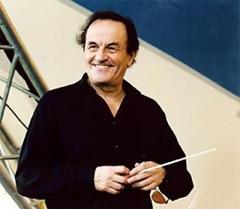 Heuwell Tircuit on February 15, 2010
There was nothing of English pastoralism on Friday’s all-British program by the San Francisco Symphony, under guest conductor Charles Dutoit. The two 20th-century works offered a nearly tactile brilliance all evening long, aided and abetted by the orchestra’s concertmaster, Alexander Barantschik, and, in the closing minutes, by the wordless, offstage women of the S.F. Symphony Chorus.

The concert opened with a warmly bravura account of Sir William Walton’s Violin Concerto of 1939, though in its 1941 revision. Following intermission came the glamour of Gustav Holst’s lavish The Planets, Op. 32 (1916), the women performing only toward the end of its final movement, “Neptune, the Mystic.”

Walton (1902-1982) loved Italy: the country and its culture of good living, its arts, climate, and physical beauty. (Don’t we all?) In fact, he spent his last years living there. For in spite of his formal-looking title — he was knighted in 1951 — he was a quite informal guy. The story goes that when he visited the Hollywood Quartet before the recording of his one string quartet, he was greeted at the door as “Sir William.” But Walton held up a hand, saying, “Please. Willy.”

His wonderfully effective violin concerto is full of Italian influences and fresh ideas. There’s something of Respighi in the concerto, along with hints of Puccinian warmth. The three movements constitute a semi-rhapsodic sonata form, the second a scherzo in quasi-tarantella style, whose tempo marking is “Presto capriccio all’napolitana.” Then comes the flashy finale, in rondo form. The basic key in B minor, yet the basic mood is glimmering brilliance throughout.

Walton’s concerto was commissioned by Jascha Heifetz. As a special historical touch, Barantschik played it using Heifetz’s own Guarnerius del Gesú violin, which is very likely the same instrument used when the concerto was premiered. Not only that, it had once been owned in the 19th century by Mendelssohn’s Gewandhaus concertmaster, Ferdinand David, who played it to premiere that composer’s famous concerto. How authentic can you get?

In line with the composer’s personality, Barantschik played the concerto in street clothes, that is, a regular dark suit instead of tails, and using the music rather than from memory. Neither altered his brilliance one iota. I don’t think that even Heifetz played it any better. Barantschik was flawless, and got a grand ovation from everyone in the room for his accomplishments in a most demanding composition. Dutoit was beaming, as he had good reason to.

More Than a One-Hit Wonder

Poor Holst (1874-1934) is well-known for his Planets all over the world, but for virtually nothing else. That’s a great pity, for he wrote a lot of wonderful music, not least his choral works: things like the grand Hymn to Jesus for chorus and orchestra. There’s the comic Fugal Overture — which isn’t remotely fugal, but really a dancelike romp. (It was the curtain-raiser for Holst’s takeoff on Wagner operas, his comic opera, The Perfect Fool.)

There’s also a terrific Double Concerto for two violins and orchestra, and A Fugal Concerto, a kind of concerto grosso, for flute, oboe, and strings. I could go on with such a list. Holst’s neglect is a shame, as is the fact that he was never knighted.

The best-known movement of The Planets is the opening, “Mars, the Bringer of War,” which has nearly been parodied into a cliche. Bits of it are frequently heard in movies and telecasts, and even played by marching bands at college football games — largely, I suppose, because of the feeling it conveys of threatening foreboding.

Dutoit shrank from nothing, unleashing the sound of massive demons from Holst’s Mahler-sized orchestration. As well-known as the piece is, it has maintained its frightening mien. It stands in great contrast to the fleet racing of notes in “Mercury, the Winged Messenger.” There’s more than a hint of Mendelssohn in there.

Listeners can hear so much variety in The Planets. It’s a kind of cornucopia of orchestral moods, textures, and colors, many of which were utterly new to music when the piece was unveiled. Like Richard Strauss, Holst went in for unusual blends by cross-breeding sections. Then too, he scored in a few very unusual instruments and added little solos for them so you’d notice. The bass oboe, for instance, has a brief, growling solo during “Saturn, the Bringer of Old Age.”

Dutoit was exceedingly good in capturing all these various facets of the score, with well-chosen tempos — though I’ve never heard the “Mercury” scherzo played quite so quickly. The strings sang out with verve during this virtuosic display, but I kept wondering if they didn’t deserve seat belts. I should also mention the lovely violin solos by Nadya Tichman, who took over as concertmaster during the Holst.

My one criticism would be the balances in the noisier segments of the Holst. The large brass section (six horns, four trumpets, three trombones, two tubas) roared in such a way that they sometimes obliterated the string section.

The percussionists, striking everything but the kitchen sink (including two sets of timpani), were also feeling their oats a little obtrusively. Dutoit sacrificed grace for the sake of excitement. There was, however, a plentitude of that. By contrast, the six-voiced female choir was sensational in its sustained beauty of sound at the ultrasoft dynamics that rounds off “Neptune.” That’s very demanding indeed.

The audience appreciated it all, demanding numerous bows after each work.