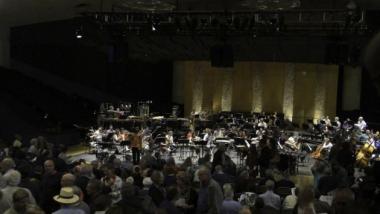 Here’s a challenge for the novelty betting industry: How to make book on which piece will get the most applause at the 2015 Cabrillo Music Festival? It’s not easy. The crowd loves almost anything Music Director Marin Alsop puts in front of them. Almost every piece has something unusual that could push listeners’ I-love-it buttons, and the players and soloists get better every year.

Just look at the competition for the first weekend:

Of course, everyone lucky enough to be in the nearly sold-out Civic Auditorium did. All pieces, as usual, were well received. But of all the fine compositions the audience enjoyed, it was Huang Ruo’s The Color Yellow on Saturday that sent the crowd the wildest, thank to soloist Wu Wei, who arrived on stage with what looked like a hunk of driftwood off a nearby beach. Huang Ruo’s strategy was to have the music for the sheng lead the listener and the orchestra, as if through a gate, into his aural narrative.

On closer inspection, it proved to be a sheng (pronounced “shung”), a modernized version of a Chinese instrument dating from the century of the Trojan War. It’s a mouth organ that can sound like an accordion, a harmonica, pipe organ, bagpipe, duck call—even a coin from the game Super Mario Bros. (check out this demo). Novelty is one thing, but it’s the artistry that brings folks to their feet. Huang’s dramatic composition and Wu’s mastery and passionate gestures are what opened the floodgates of appreciation.

Yellow, by the way, is a synonym for gate in Chinese. Huang Ruo’s strategy was to have the music for the sheng lead the listener and the orchestra, as if through a gate, into his aural narrative. This began with disjointed, powerful statements with transitions; continued with a five-minute, astoundingly varied cadenza; and concluded with an extended, breath-of-fresh-air melody that assuaged all the violence that preceded it.

Close behind Yellow was MacMillan’s percussion concerto on Friday evening. While dressed more formally, Currie should really have been wearing track shorts. The front of the broad stage was lined end-to-end with things to hit, including a xylophone, marimbas, drums, temple bells, hub caps, and a steel drum. At times Currie had to run end to end to get to the right instrument in time. Two of the most interesting of these items were a set of 18 cowbells, two of which were the size of small backpacks, and a new instrument consisting of an array of 30 conical bells, an aluphone. The aluphone bells, which Alsop joked reminded her of “Madonna outfits,” sounded midway between a bell and a triangle.

MacMillan’s 24-minute concerto was in one movement of immense variety, with some fantastic sounds (e.g., contrabassoon blurps, thundersheet strokes, and a deep hollow sound conjured up from god-knows-where), a ton of energy, and thankfully, a little more orchestral clarity than what he usually provides in his music. Most distinctive were some rushing string moments and the advent of a brass chorale that, as Alsop put it, “eventually conquers the movement.”

The third most-popular work, concluding Friday’s concert, seemed to be Mason Bates’ suite illustrating six fantastic beasts listed among 80 in Jorge Luis Borges’ Anthology of Fantastic Zoology. The piece showed Bates’ increasing command of the orchestra alone, moving away from his signature requirement to include electronica. I particularly liked the William-Tell-like gallop Bates used to illustrate horses chased by his Gryphon, the violins that became Sirens high up in the stands above the audience, and the warm, “frolicking” clarinets that were Nymphs. If only Bates had taken a cue from Saint-Saëns Carnival of the Animals and made his concluding movement, where all the beasts were brought back for an encore, far briefer.

Friday’s opening work, David T. Little’s Haunted Topography, was inspired by the story of a woman who wanted to see the place where her son was killed in the Vietnam War. Marimba chords, like an Excedrin headache, saturated the music and symbolized the woman’s pain.

Far more pain was projected by Kouyoumdjian’s Sunday-evening Silent Cranes, a 30-minute lament of scaled, Kronos-engineered intensity. The music’s rarely relieved funerality was overlain by recordings of survivors describing how family members were eviscerated by Turks. “Never forget” was the message. Necessary as it was to hear that message, “never hear it twice” is my recommendation.

Other works featured by Kronos on Sunday were a fine and melodic Third String Quartet by Nathaniel Stookey; Terry Riley’s overlong Good Medicine, from Salome Dances for Peace, in honor of the composer’s 80th birthday; the very slow and ethereal Flow by Laurie Anderson; and another four-minute work, which seemed twice as long due to its repetitiveness, Oberek for Terry Riley, by Aleksander Kościów.

Mark Applebaum’s Darmstadt Kindergarten proved an interesting psychological experiment. A series of a dozen or so riffs in 17 measures is played five times. With each iteration after the first, first one, and then another of the quartet members stands up and does hand gestures for each riff. The last time, all members are gesturing, with no music—except, supposedly, in our heads. Fun to watch, but it wouldn’t make an interesting recording.

The most popular of the remaining Saturday works was Newman’s, which he described as an “exploding, inarticulate dessert.” Compact in its four minutes of George Antheil-like craziness, it seemed to be an edgy version of Hayden Wayne’s Funk Symphony, in terms of its overlapping-riff construction. This is one dessert I could grow fat on with enjoyment.

Not knowing the music of White Stripes, I’m sure I missed some of the profundity in Talbot’s Chroma. What I did hear was a minimalistic series of over-repetitive riffs and passacaglias. I think dancers are a necessary component to Talbot’s accompaniment.

Finally, there was the opening work on Saturday, Currier’s Quanta. Another conceptual exercise, this time based on Chinese characters — their utter strangeness to those unable to read them, their white spaces, and their growing familiarity if seen a lot during a visit to China. This is exactly what happened to Currier, who was given a tour of China as part of his commission to write the piece.

White space in the music was represented by one measure of silence for every two measures of music. This was a strategy that might appeal to fragment-loving multitaskers. Some of the little riffs comprising the remaining two thirds of the music were interesting, but only recurred infrequently. This piece, like the country that inspired it, might require a lifetime of visits to begin to understand it properly.

I’ll wager on one sure thing: that my jaw will drop again next weekend at the excellence of Alsop and her team. Somehow they bring to perfection the swim-to-the-Farralons difficulty of performing so many new works at one time.