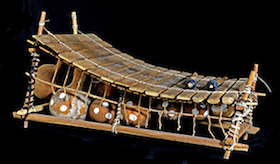 There was one big question on opening night Friday at the Cabrillo Festival of Contemporary Music in Santa Cruz — at first. Would Carolyn Kuan be able to fill Marin Alsop’s shoes as conductor? Alsop, a monument now after 20 years of acclaim as the festival’s music director, was absent due to a hand injury. As the concert proceeded, a second question emerged: Is this music actually contemporary? Fortunately, by the end of the evening, there was no question: Quality had overcome both concerns.

Kuan, recently appointed music director of the Hartford Symphony, is no stranger to Alsop’s approach to music-making — for she has worked closely with Alsop and the festival since 2003. So armed, she displayed every bit as much energy as her mentor, and continued Alsop’s tradition of developing audience rapport, introducing all three of the program items personally, and even playing some excerpts in advance. I cannot overstate (especially since Alsop herself in recent years has fallen off her earlier pace in this regard) how helpful a gesture excerpt-playing can be to new-music audiences.

Or was it new music, in fact? All three of the works were new to me, and two of the three had been written in the last couple of years, but all three were passé in style, harking back to the postmodernism of the early 1990s and earlier, when deliberate reference to other composers or styles was de rigueur.

The first work on the program, Derek Bermel’s, Dust Dances, was written in 1994, so it can be forgiven both its age and its placement in the branch of postmodernism that incorporates world-music elements. Ironically, it sounded the freshest of the three.

Indeed, the concert, misnamed “Dust Dances” (after Bermel’s piece), should have been called the “Cabrillo Imitational,” a tournament to demonstrate who could best imitate chosen sources. Bermel’s dances attempted to imitate the sounds of the gyil (pronounced “jill,” “jilluh,” or “jillay”), a marimba-like African instrument with underlying gourds as resonators (see illustration). Bermel’s ethnomusicologic expertise came through in orchestrational spades in this 10-minute set of catchy, dotted tunes surrounded by a myriad of novel percussion sounds.

Next came Kevin Puts’ premiere of his Flute Concerto. The first movement begins with a beautiful melody that the composer confesses had been “swimming around” in his head “for more than half a lifetime.” I only wish I could have heard more of it. In its second movement, the composer attempted to imitate and elaborate on what he called the “mindboggling and humbling” second movement of Mozart’s Piano Concerto No. 21, K. 467, with its famous Elvira Madigan theme. What could easily have devolved into kitschy excess came across as equally pleasant and as creative as the original Mozart. But even a stronger imitation came through: Puts’ appreciation of Thomas Adès’ violin concerto, Concentric Paths, with its heart-sinking, chromatically descending harmonies. Puts used these as a transitional feature of all three movements, and acknowledged his source of inspiration to me during intermission. Puts’ concerto, nicely soloed by Adam Walker, received a deservedly huge ovation.

Opening night concluded with the first West Coast performance of Christopher Rouse’s Symphony No. 3. Like Puts’ concerto, the symphony advertised an imitation of one composer while less publicly displaying the influence of another. In Rouse’s words, “Prokofiev’s Symphony No. 2 furnished the old bottle” into which he had “tried to pour new wine.” The bottle was in the form of a two-movement structure (an allegro followed by a set of variations); its label was the overall aggressive character of the Russian’s little-performed work.

The orchestra performed magnificently under Kuan’s baton, and the audience was giving it, as well as Rouse, due appreciation.

While the allegro had an homage to Prokofiev in the form of a short percussion quote, its actual “old bottle” label was Rouse’s own pugnacious stylistics in such works of his as Gorgon (1984) and Jagannath (1987), though here tempered with more variety and a subtler sense of orchestration and timing. The set of five variations that followed was hampered by what I thought was an unattractive theme, however masterly its permutations, plus a coda that seemed forced. The highlight of the movement was its second variation, which Rouse characterized as “highly romantic.” Out of the battles of much of the rest of the symphony emerged the ghost of Ralph Vaughan Williams’ Thomas Tallis fantasia with its rich harmonies on divided strings. If only the theme had been less angular and more Tallis-like.…

Like the Puts, the Rouse symphony received a splendid ovation from the packed Civic Auditorium crowd. While the orchestra has been far from flawless in past years (think of all the new pieces it has to learn!), on Friday night it performed magnificently under Kuan’s baton, and the audience was giving it, as well as Rouse, due appreciation. Following the secret theme of the concert, I imitated — Rouse, and my neighbors —and succumbed to the lure of violence, repeatedly bringing my hands into collision one with the other.