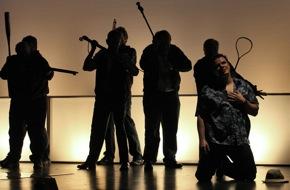 Cads Get Their Comeuppance

Anna Carol Dudley on February 22, 2010
Berkeley Opera, undergoing some significant changes, is assuring its audience that all is well, by presenting an engaging production of Mozart’s Don Giovanni. Saturday’s performance in its new venue, the El Cerrito Performing Arts Theater, under the direction of new Artistic Director Mark Streshinsky, was a resounding success.

The production is set in the current century, replete with the latest trends in popular culture. For anyone who might be apprehensive about whether singing Mozart in Italian could be at all compatible with such an approach, rest assured: His marvelous music, his wit, and his basic humanity are scrupulously preserved in this performance. And hearing it in Italian is, if anything, helpful, since it’s Mozart’s music rather than Lorenzo Da Ponte’s libretto that still speaks to us.

Eugene Brancoveanu makes a terrific Don Giovanni. Handsome and moving wonderfully well, he is by turns assertive and seductive. His voice, powerful in command, is beautifully colored in intimate, beguiling moments. I wasn’t happy about his having been directed to spend so much time on the floor. Don Giovanni, in whatever era, is a person of consequence, and might be expected to relax in a chair rather than lying on the floor, and to have a table set for a dinner guest. In fact, it throws his character into sharp relief to see him choose droit du seigneur over noblesse oblige.

The third scene of Act 1 opens in a yoga class. Giovanni and his servant, Leporello, join chorus members in various poses — Downward Dog, Warrior, and the like. Off to one side of the class appears Donna Elvira, who considers herself bound to Don Giovanni, and has come to town to accuse him of desertion, in the hope either of taking revenge or of winning him back. Aimée Puentes, singing the role of Donna Elvira, emerged from a floor pose to vent in an aria, “Ah! chi mi dice mai” (Ah! who could tell me?). Her performance was electrifying. The gradual interest Giovanni feels in this damsel in distress, followed by a comic moment of mutual recognition and Giovanni’s escape from the scene, were played to perfection.

Leporello was left to “explain” matters to Elvira, which he did by scrolling through his iPhone and launching into his “catalog” aria, “Madamina!” (My little lady!). He described Don Giovanni’s hundreds of conquests, and a large map of Europe appeared on a screen behind him peppered with yellow pushpins as he told her how many there had been in each country (precisely 1,003 in Spain). There were alphabetical lists of names, each accompanied by a picture, demonstrating the wide range of Giovanni’s taste, from Botticelli’s Venus to Whistler’s Mother.

Igor Vieira, as Leporello, showed himself to be Brancoveanu’s equal as"a singing actor. He sailed through his patter song so effectively that he was in no way upstaged by the visuals. It is no surprise to learn that a number of first-rate singers have both Don Giovanni and Leporello in their repertoire. The roles are equally important and equally demanding in individual ways.

Mozart added Elvira’s stunning aria “Mi tradiquell’alma ingrata" (That ungrateful wretch betrayed me) to the opera after the first performances. Elvira, embittered by Giovanni’s betrayal, still feels torn between exacting revenge and trying to save him. The aria is now usually included in the second act, but a strong case can be made for inserting it after Leporello’s narrative of Giovanni’s perfidy. Aimée Puentes was a standout, both in her singing and in her acting, but when her big Act 2 aria came, she seemed not quite up to it — either fatigued vocally, or overwhelmed by continuous physical movement that compromised her strength. I longed to see her simply stand for long moments, to spin out a sustained legato and to create a shapely phrasing of this wonderful aria.

All in the Family

The opera begins with a flurry of action. Don Giovanni, masked, has entered Donna Anna’s bedroom and attempted to seduce her. She chases him outside, hanging on to his arm, trying to see who he is, and yelling for help. Her father, the Commendatore, arrives to defend her honor. Giovanni tries to escape. The Commendatore calls him a coward and insists on a fight. Giovanni obliges by killing him, then runs off with Leporello, who (succinctly) brands him a libertine and a murderer.

Donna Anna is devastated by her father’s death, and her fiancé, Don Ottavio, supports her in her agony and agrees to find and punish the murderer. When they discover that Don Giovanni is the culprit, they team up with Elvira to pursue him. Kaileen Miller played Donna Anna, and was a clear audience favorite. Her fast passagework needs more precision in intonation and rhythmic solidity, but she sang with fervent feeling.

Michael Desnoyers sang Don Ottavio, bringing great vocal beauty and technical security to Ottavio’s two big arias. It’s a difficult role dramatically, because he keeps offering to help, and Anna can think of nothing but the loss of her father. Ottavio’s declarations of love are ill-timed, and fall on deaf ears, but he does help, and the trio of Elvira, Anna, and Ottavio do contribute to Don Giovanni’s downfall. I don’t quite agree with director Streshinsky’s take on their relationship. I’m inclined to believe her declarations of love (especially considering what a good singer this Ottavio is). Deprived of her father’s guidance in arranging her marriage, and committed to a decent period of mourning, she belongs more to the 18th century than the 21st.

A village maiden, Zerlina, is about to celebrate her wedding to one Masetto (the appropriately suspicious William O’Neill), when she catches the roving eye of Don Giovanni. Elvira, determined to save other women from her own fate at the hands of Giovanni, rescues Zerlina from his clutches. Elyse Nakajima sang Zerlina, and did an excellent job of assuring Masetto of her love, while assuaging his hurt.

All told, this was a fine cast, and there wasn’t a weak link in the brilliant ensembles Mozart had devised to advance the action and illuminate the characters’ feelings. If there were any little glitches, conductor Alexander Katsman kept things together admirably.

Don Giovanni’s encounter in the cemetery with the Commendatore’s statue was effective. The appearance of the stone Commendatore responding to the Don’s dinner invitation was less effective. But Don Giovanni rose to the occasion, refusing to repent, and convincingly crying out in horror as flames enveloped him. James Grainger played the Commendatore, though at the end we saw him approach via projection, and we heard his recorded voice but didn’t see the statue’s lips move. There may have been technical reasons for this unsatisfactory ending, and also for some of the lighting (excessively dark at times). Even if the action is taking place at night, follow spots might be more helpful than faint flickering on faces. And I could have dispensed with the strange bits of action during the overture; perhaps the lack of a curtain in the new hall was deemed a problem.

Mozart's final sextet, after the dramatic death, is a bit anticlimactic, but he provided a nice wrap-up informing us where the characters are going to end up. Perhaps the supertitles could strive to translate Mozart rather than Da Ponte, to prevent merriment in the audience at being informed that bad guys always get it in the end.

I’ve omitted descriptions of many little touches ... like more yoga poses, and Don Giovanni’s radio, and his table-manners, and costume racks coming down from the ceiling, and the chorus dancing non-minuet steps, and Giovanni’s Cyrano-like wooing of Elvira (and later of her servant). You’ll have to go experience the opera for yourself.