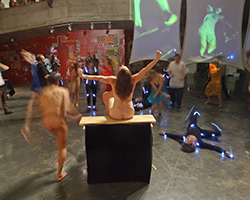 The venue, the Berkeley Art Museum / Pacific Performance Archive, features a large number of collection-circuiting ramps and few staircases, but there were nevertheless plenty of undescending nudes present, both in projections and in person. Five of the 30 participating dancers were completely in the buff. A video of a live model walking out of Duchamp's famous painting was repeatedly projected on the main screen. Paik's longtime musical associate, cellist Charlotte Moorman (1933-91), was channeled by Theresa Wong in a nude video honoring Paik's Opera Sextronique, which got Moorman arrested for indecent exposure in 1967. In person and clothed, Wong played an electronic cello and bicycle along with her video.

Live sound recording from the event

On a more sparsely attended lower level, composer Luciano Chessa performed and projected various versions of Cage's famous 4' 33". On an upper level, Cahill played various Cage pieces on an electric piano. The dancers, some wearing lights (too feeble to fulfill the claim in the program that the dancers' 'stage' is the light they cast), wandered around the facility, though the nude ones stayed on the main level. In addition to other collaborators, Sanborn told me that 90 of the hundreds of attendees signed up to perform various "tasks" such as screaming, yodeling, reading aloud, following others, and so on, thus becoming members of the performance ensemble. Most of the rest of the attendees, however, stayed put on the lower level, or gazed down from the balconies rather than milling around.

I cannot do justice to the organizational complexities of the performance art, a continuation of Paik's fascination with the anti-art, anti-commercial aesthetics of the Fluxus movement. A large combination of events was progressively scheduled by the minute using Cage's Fontana Mix technique of quasi-random determination. Suffice it to say they must have been considerable. To Sanborn and his co-designers' credit, nothing untoward occurred to detract from the experience.

From the music critic's perspective, you don't listen to this genre as you would Beethoven, trying to follow themes or underlying structures. The only obvious structural element began 5 minutes before the end, when the participants formed a conga line and slowly snaked off the main floor toward the exit.

Affectively, the soundscape was noisy, busy, active, like attending to an anthill. A lot goes on, but sameness sets in unless you follow a particular ant and make a narrative of its progress. You can get an idea of the ambiance from the attached low-fidelity recording, and realize the components might be more interesting than their sum.

But even the anthill approach is probably too analytic for this be-in. It would have been best to have arrived earlier and listened to John Kennedy reading Cage's Lecture on Nothing that preceded the advertised start of PICO, but should have been a part of it.

To lay back, enjoy a change of pace from the absurd restrictions of tonality and sonata form, to absorb, parsing or not, with a large number of others, a flood of sensory input — that may be the first step toward a different plane of art altogether.