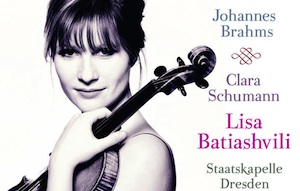 Can There Ever Really Be Enough Brahms?

What, another Brahms violin concerto? Aren’t we adequately stocked already?

Actually, we’re not, because there are always musicians noticing new things. So here we have Lisa Batiashvili, a wide-ranging violinist whose style really doesn’t go out of its way to break norms, and Christian Thielemann, a conductor who has a certain tendency to do just that, and the Dresden Staatskapelle, which I’d say manages to break norms just by being itself. So what results?

I don’t think I have ever heard a performance of this concerto in which the orchestra figured like this. You listen to the opening bars and you notice the bassoons and the horns. From that point onward you’re attending to the orchestra, and noticing details that were always there, but that you’d never paid attention to, because … well, a concerto is all about the solo part, right? Not so.

It’s not that Batiashvili is shy; she’s a positive tiger in places. But she’s willing to cede the spotlight, or at least share it. As a result, I found myself hearing things I hadn’t noticed before: dialogues between soloist and woodwinds, or between soloist and strings, interactions that were scarcely there in performances where the soloist was it and the orchestra was at best a decorous backdrop.

As you’ll have gathered, part of this is simply balance. Batiashvili is enmeshed with the orchestra much more than most Brahms Concerto soloists are. You can hear very well everything else going on around her, and often the accompanying solo winds match her strength, while the brass are frankly beyond it.

Yet the real genius of this performance is in putting this violinist, this orchestra, and this conductor together in the same hall. Batiashvili is a slender-toned sort of violinist — by which I don’t mean that she can’t pour out sound when she wants to, but that the silvery thread of sound is one of her specialties. The Dresden Staatskapelle belies the going line that all orchestras now sound exactly the same. I don’t think anyone would mistake this for an American band (or a UK one, for that matter).

As for Thielemann, I credit the balance to him, and it’s brilliant. Batiashvili plays Ferruccio Busoni’s cadenza in the first movement. It’s famous — or notorious — for its timpani accompaniment. I’d always thought that came from Beethoven’s cadenza to his piano arrangement of his own Violin Concerto, but now I doubt it. The tympani element is there all through the first movement, and in this recording it’s, I’d say, deliberately audible.

The cadenza is wonderful, sort of a hybrid of Joachim’s and Kreisler’s (there’s a long, yearning passage that might almost have come straight from the latter). The accompaniment isn’t only timpani. Strings steal in toward the end.

The real genius of this performance is in putting this violinist, this orchestra, and this conductor together in the same hall. The slow movement is very fine, beginning with an account of the opening oboe solo that would be difficult to top. The finale has that slight rhythmic stickiness that belongs to Magyar music. It struts a bit, as it should. But then you hit that solo passage near the end, and suddenly you are, for a few bars, in solo Bach territory, sweetly and gently played. It gets a lot more raucous after that, but Batiashvili’s deceleration in the final bars is the most elegant I’ve ever heard. She nearly evaporates before the orchestra caps her.

The coupling is Clara Schumann’s Op. 22 Three Romances for violin and piano, with Alice Sara Ott. I may say that this performance makes me want to go out and buy a copy of them. They are very like her husband’s short instrumental pieces — especially the last, which might almost be a fourth Oboe Romance. As a “filler” for a disc that ended up under 48 minutes long, they might seem inadequate, but honestly I prefer a first copy of music I don’t know to a tenth of music I do. They do sound a little odd coming after the concerto (I would have put them first), but I’m glad to have them, especially played this well.