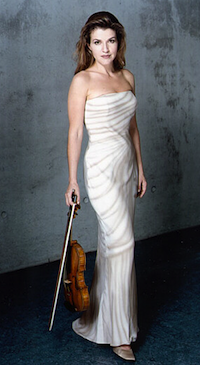 It seemed impossible to add yet another layer of emotions to their recital, but violinist Anne-Sophie Mutter and her pianist, Lambert Orkis, did just that on Monday at Davies Symphony Hall, presented by San Francisco Performances; they dedicated their second encore, Bach/Gounod’s Ave Maria, to the memory of William Bennett, the principal oboist of the San Francisco Symphony, who collapsed on that very same stage on Feb.23 during his performance of the R. Strauss oboe concerto and passed away a few days afterward.

Tears were shed, but they weren’t the first tears of the evening. From the first notes of Mozart’s Sonata for Piano and Violin in G Major, K. 379, and all through Schubert’s Fantasie in C Major, D. 934, Lutoslawski’s Partita, and the first violin sonata by Saint-Saëns, Anne-Sophie Mutter and Lambert Orkis took the audience through and around an unbelievable series of emotions and sensations.

The slow introduction of the Mozart sonata contains a melody in the violin that could easily pass for a Viennese piece from the Romantic era, but it is oh-so Mozartean in the piano part. As Mutter mentioned in a recent interview, Orkis has an extensive background in performing on period instruments, which gives him a very light and lively way of phrasing Mozart’s music, even on a nonperiod instrument.

At the piano, Orkis embodies every note he plays — plus every note from Mutter. His shoulders and eyebrows move in emphasis with the music, he nods approvingly when things come together, he fiercely glances over his shoulder to accurately catch a transition, then he hunches over as the music gets softer, as if he has trouble hearing himself play. He makes the piano sound anything from sweet and soft and velvety, to rough and loud and savage — producing melodies that waft like a morning breeze, ripple like a small stream, then burst into sparkles.

Orkis makes the piano sound anything from sweet and soft and velvety, to rough and loud and savage.

Mutter’s concentration, meanwhile, looks quite different. Dressed in one of her trademark strapless gowns, playing with minimal body movement and most of the time with her eyes closed, she exudes commanding and captivating mastery. Every note she strikes is overflowing with sentiment, even the soft pizzicatos she plays as countermelody in the Mozart sonata, or the thinnest, wispiest high notes she drapes over Orkis’ sweetly cascading chords at the beginning of Schubert’s Fantasie , from 1827.

The initial sweetness in Schubert’s piece is soon replaced with raw, grand gestures and lots of movement up and down the keyboard. Then the music comes to a standstill and the piano continues in a contemplative mood. The violin joins in with a song of love and longing: one of Schubert’s own songs, “Sei mir gegrüsst” from 1821, which goes through a number of increasingly complex variations, each with its own state of mind.

It’s all beautifully done, leaving the listener slightly bedazzled, amazed that music can have this effect.

The Lutoslawski Partita was the high point of the concert. It is similar to the Schubert Fantasie in the way the music passes through a wide range of emotional gradations that conjure up vivid images and associations: the hint of a nightingale singing, a ray of bleak moonlight, water dripping from an icicle in the sunlight, a fragment from a melancholy Slavic melody. Sometimes violin and piano sound so shrill together that the dissonance pulsates in your ears. It’s all beautifully done, leaving the listener slightly bedazzled, amazed that music can have this effect.

Lutoslawski’s Partita was hard to top, but the Saint-Saëns sonata was a worthy finale of the Mutter/Orkis recital. The piece ends in a lengthy passage in which piano and violin chase each other through a dizzying and simply insane deluge of 16th notes, Flight of the Bumblebee–style. Every note that Anne-Sophie Mutter played held meaning and passion and substance. And she made it look effortless. But that is what a great artist does.