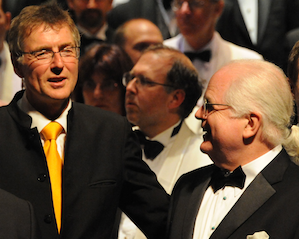 Having spent a Bach-oriented day at the Carmel Bach Festival on Monday, I stayed over on Tuesday for a day with music almost entirely French.

11 a.m. The weather was sunnier in Carmel than on Monday morning, though still cool. In the meeting room in the basement of the Sunset Center, the free program item combined concert and lecture. William Skeen described his viola da gamba — a Renaisance-era cousin to the cello — and played quiet, wistful music by Marin Marais, accompanied by Yuko Tanaka on harpsichord. After some of the pieces, John Wineglass, himself a film and TV composer, showed clips of the same works appearing in the 1991 historical movie on Marais, Tous les matins du monde, and discussed with the audience their use according to the principles of film music composition. Some of the clips were racier than the children in the audience were expecting; the insights into the art of film music, however, were genuine.

12:30 p.m. The morning session’s conclusion left a relaxed two hours for lunch at a bistro on Ocean Avenue — some of these places give a discount to customers who show a Festival ticket — before a stroll down to All Saints Church for the afternoon concert. By then it was foggy again.

2:30 p.m. Seating is open at All Saints, so attendees had begun forming a line about half an hour in advance. People chatted in the oddly humid cool weather and genially greeted friends. Like Monday’s, Tuesday’s afternoon concert was an intermission-less vocal recital with an instrumental middle section. Today’s French offerings all dated from between 1871 and 1906. Tenor Thomas Cooley put his robust tones and clear enunciation to work on two of the most cheerful song cycles in the repertoire, Ravel’s Cinq melodies populaires grecques and Fauré’s La bonne chanson. The latter, a setting of nine consecutive ecstatically happy love poems by Paul Verlaine — how often will a French poet do that? — was performed with intense and subtly varying lyrical emotion. “Avant que tu ne t’en ailles” begins with excited birdsong references in both lyrics and accompaniment — a large ensemble, of piano and string quintet with double bass — and ends with a fortissimo exclamation on the appearance of the golden sun. Cooley’s voice shone like the real thing. He was allowed to convey more varied emotion  in the Ravel, accompanied by Dan Levitan on harp.

Levitan featured in both instrumental works, as accompanist to Dawn Loree Walker’s flute in an arrangement of Saint-Saëns’ Romance, Op. 37, and as effective leader of the band, and most fluid performer, in a fiercely Impressionistic tone-color rendition of Ravel’s Introduction and Allegro for Flute, Harp, Clarinet, and String Quartet.

Paul Goodwin conducted what another attendee described to me as “the most exciting Bach Festival concert I’ve been to in years.”

3:45 p.m. In the church’s front courtyard after this concert, volunteers scooped dishes of three flavors of ice cream for a surprise afternoon treat.

6:45 p.m. Patrons converged on the basement meeting room at Sunset for Festival dramaturge David Gordon’s preconcert lecture. He gave a précis of the program: informative, entertaining, and more detailed than his stage narration was.

7:20 p.m. The lecture audience emerged to find the “Tower Music” program, a brass quintet offering a preconcert appetizer, already under way on the Sunset Center’s outside upper terrace. The music was by Eric Ewazen, and the quintet introduced it with a mock dispute over the pronunciation of his name. Then the attendees stepped over to the nearby theater for the main event.

8:00 p.m. Paul Goodwin, the Festival’s artistic director, dressed monsignor-like in a long black jacket, conducted what another attendee described to me as “the most exciting Bach Festival concert I’ve been to in years.” It took the form of a stab at a historical survey of French music.

The first half went deeper into history. The unaccompanied Festival chorus sang movements from masses by Guilllaume de Machaut — stark and spicy open harmonies — and Josquin des Prez —more intricate counterpoint — with a stomping medieval dance from the orchestra in between. Then the orchestra struck up a suite of Jean-Baptiste Lully’s stately ballet music from Le bourgeois gentilhomme. The half concluded with a full performance of the Cantata No. 61 by the composer whom Gordon, from the narrator’s seat at the corner of the stage, dubbed Jean Sébastien Bach. The point of Bach on this program was to prove how much French culture he’d absorbed at school and how much his music could sound like Lully’s when he wanted it to. The soloists were Thomas Cooley from the afternoon concert, baritone Peter Harvey from Monday’s, and soprano Dominique Labelle, all in fine voice.

It was a burnished, heavy performance, like a stained-glass adaptation of an Impressionist painting.

The second half consisted of a collection of greatest French hits from the mid-19th to mid-20th centuries, most of them vocal. Labelle sang, most elegantly, two of Joseph Canteloube’s Songs from the Auvergne, one lyrical and the other a comic tongue-twister, and she joined Clara Rottsolk for a full rendition of the “Flower Duet” from Delibes’ Lakmé that was about as beautiful as it comes. A pair of unaccompanied comic male choral songs by Poulenc were robustly silly. Cooley and Harvey gave their all to the rather dull “Pearl Fishers’ Duet” from Bizet’s opera of that name, in which two men each declare their love for the same unattainable priestess but decide not to fight over it. Afterwards, they warmly embraced, stoutly ignoring the rest of the opera’s plot, in which things go very badly. And, of course, no collection like this would be complete without offering superior Bizet in the form of the “Bullfight Chorus” from Carmen. (The sometimes erroneous supertitles informed us that Carmen premiered in 1865.)

Aside from a couple orchestral interludes in the Bizet operas, the only purely orchestral work in the half was Debussy’s Prélude à l’après-midi d’une faune. Like the Ravel Introduction and Allegro, it was a burnished, heavy performance, like a stained-glass adaptation of an Impressionist painting.

10:30 p.m. As the greatest of all diarists concluded his entries: And so to bed.