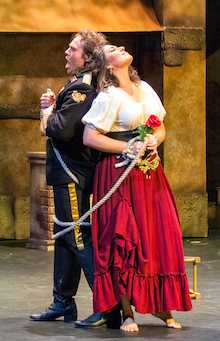 Carmen, Without the Sizzle

It seemed inevitable that Carmen, whose string of great tunes never fails to lure audiences to the opera house, would make its way to Livermore. That Bizet’s addictive melodies, rather than their interpretation, linger in the memory the day after opening night goes to prove that it takes far more that exceptionally fine voices and honest effort to bring Carmen to life.

Livermore Valley Opera’s production, directed by Eugene Brancoveanu in the acoustically superior Bankhead Theatre, got off to a dreary start as two fine Flamenco dancers, Anya Demarie and Christina Zanfagna, postured and clicked their heels a few times during conductor and company music director Alexander Katsman’s lackluster overture. Not even the orchestra’s cymbals clattered with the spark of life. As the curtain opened to reveal the first of Jean-François Revon’s quasi-realistic, quasi-cartoonish sets, the poorest male chorus in recent memory attempted to act engaged as it stabbed at high notes. Thankfully, the women’s and children’s choruses were far more musical.

Matters improved considerably when Efrain Solis (Zuniga), a recent San Francisco Conservatory of Music and Merola Opera Program graduate, entered to display one of the most handsome and well-formed baritone voices I’ve encountered on the regional opera stage. (I look forward to his Lieder eines fahrenden Gesellen with the SFCOM Orchestra on February 22.) All that was missing was the same energized direction that made his Junius the sleeper standout of Merola’s The Rape of Lucretia this past summer.

In Solis’ footsteps followed a host of fine principals who, if not ideal for their roles, nonetheless validated Katsman’s ability to assemble a superior cast. As Carmen, the attractive Cybele Gouverneur displayed a perfectly formed, deliciously rich and glamorous mezzo-soprano whose beauty lessened only on a few of her highest notes. Brancoveanu, however, erred when he occasionally bookended her with dancers whose proficiency underscored her inability to swirl her hips very far.

The same could be said of her singing, which, while admirably alluring on an instrumental level, never achieved the menace of a dangerous femme fatale. If Gouverneur’s opening act Seguidilla (“L’amour est un oiseau rebelle” (Love is a rebellious bird) simmered rather than sizzled, her careful “Les tringles des sistres tintaient” (The sistrum’s rods were clanging) was so slow as to be soporific. Did her technique necessitate such a deadly tempo, or was Katsman in desperate need of a caffeine boost? Needless to say, by the final act, where Michelle Bischel’s formal costuming made Gouverneur look more matronly than menacing, it was hard to understand why anything other than unhinged sexual addiction could account for Don José’s Carmen obsession.

Her foil, Micaëla, was sung and played with simple, Girl Scout grace by soprano Christie Hageman. An ideal currier of letters from Mommy, Hageman was able to maintain the sweet purity of her strong, winning instrument until the high passages of her Act 3 aria, "Je dis que rien ne m'épouvante” (I say that nothing frightens me) revealed the woman beneath the guise. Here’s hoping we can hear more of from this former Miss Montana (!), who is currently resident artist at Minnesota Opera.

Singing Don José, the unwitting soldier caught in Carmen’s snare, tenor Christopher Bengochea faced the challenge of two women whose natural volume level and more forward vocal placement gave the false impression that he was a lesser artist. Rather than belt his way through, he chose to modulate his voice, producing the most nuanced and ardent singing of the evening. Even his climactic B-flat in the Act 2 beloved “Flower Song” (“La fleur que tu m’avais jetée”) was sung mezza voce. When Bengochea finally opened up full voice in the final acts, his mostly secure, beautifully voiced high notes confirmed the integrity of his artistry.

Handsome baritone Brancoveanu, benefitting from modest weight loss and an athleticism that enabled him to cartwheel/flip off a table and summersault during his fight scene, cut a fine figure as bullfighter Escamillo. Although the voice of this magnetic artist was as beautiful as ever, it seemed strangely underpowered in Act 2’s Toreador Song. Fully warmed up in the final act, Brancoveanu performed with a vocal beauty and shine that declared him, once again, an artist of the first order, albeit one who lacks the macho bravado and knockout high notes of an ideal Escamillo.

In smaller roles, bright soprano Elena Galván and impressively rich mezzo-soprano Nikola Printz, still a student at SFCOM, made a winning Frasquita and Mercedes to Michael Desnoyers and Bernardo Bermudez’ El Remendado and El Dancairo. I actually can’t say much about the indisposed Desnoyers, given that he was lip-synching his role while Alex Boyer was singing his role from the pit. Juan Donyea Dunn evidenced lovely stage presence as Morales.

Katsman’s tempos greatly improved after intermission, and the opera picked up steam as jealousy and sexual tension rose. To loudly applauding audience members, many who began standing once Hageman entered for her bows, the production’s weaknesses mattered not. The woman next to me, who could not resist humming softly during orchestral solos, was but one of hundreds of faithful opera lovers who were seduced by the excellence of LVO’s voices and the sincerity of its intention.