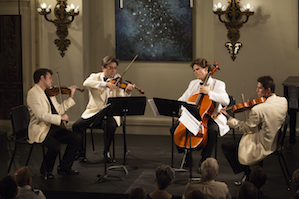 A Case for a Composer, A Festival for Evermore

“My time will come.” Gustav Mahler supposedly said that, and so did his younger Austrian colleague, Alexander von Zemlinsky (1871-1942). Mahler’s time came in due course, and Zemlinsky’s arrived on Wednesday, when the Escher Quartet played all four of his canonical string quartets for one of [email protected]’s 2½ hour Carte Blanche concerts, at Stent Family Hall on the Menlo School campus.

Actually, this once-forgotten composer has been slowly creeping into the repertoire over the last couple of decades. As far as his chamber music is concerned, the Escher Quartet — which has recorded the four quartets — bears a good deal of credit for this revival. At this concert, these musicians made the best case possible for this ungraceful, yet vividly articulate, composer. They played with greatly perceptive care and intelligent shaping of his phrases.

On Monday, the Escher violist, Pierre Lapointe, gave a talk at Menlo tracing the composer’s numerical symbolism and personal references in the quartets’ scores. It was all very intriguing, yet it could not possibly have had less to do with the experience of listening to the music.

Like Richard Strauss, Zemlinsky began as a Brahmsian. His Quartet No. 1, Op. 4 (1896), speaks Brahms’ tonal language without his accent. Zemlinsky’s practices in thematic and harmonic development are entirely different from the older composer’s. Yet the Escher players found the Brahms harmonies in this work. These matched up with harmonically unified passages in the later quartets, rare though those were in Zemlinsky’s middle period as he tended towards fragmentation.

Even in the First Quartet, the least typical of the four, characteristic Zemlinsky-isms are audible: a taut and strained air, especially in Lapointe’s viola and Adam Barnett-Hart’s first violin, a use of ostinato or static figures, and a liking for ending sections by making the material quietly vanish. The exposition of the First Quartet’s first movement brings back the opening motive to end this way. Wisely, the Escher Quartet did not follow the score’s instructed repeat of the exposition, as the repeat makes the ending anticlimactic.

Quartet 2 is fearsomely complex, at times with the four instruments playing lines different in kind as well as in content ... Here Zemlinsky is an open, even raw, expressionist.

Quartet No. 2, Op. 15 (1915), turns towards the style of Arnold Schoenberg, who had been Zemlinsky’s composition student for a while and his brother-in-law for rather longer. By this date, Schoenberg had gone on to atonal music; the Schoenberg work this quartet evokes, sometimes explicitly, is the earlier Verklärte Nacht. The quartet is an expansive and varied single movement lasting longer than any of its multi-movement partners. It’s fearsomely complex, at times with the four instruments playing lines different in kind as well as in content: one pizzicato, one ostinato, one melodic, and so on. Here Zemlinsky is an open, even raw, expressionist.

Most of the constituent sections of the Second — the Escher was conscientious, even at times over-specific, in emphasizing internal breaks in the works — begin quietly, quickly building to intensity, then reaching a resolution. The work ends most affectingly with Aaron Boyd’s second violin giving the last word over held chords.

Quartet No. 3, Op. 19, came along in 1924, and by then cooler musical temperatures prevailed. (Compare the 1920s works of Igor Stravinsky or Richard Strauss to what they’d been writing before the war.) The Third follows the idiom of the Second at that lower temperature. It reverts to the four standard movements, and is generally on a smaller scale than the Second. The climaxes are damped down a bit, and much of the emotion is sublimated into complex rhythmic patterns, which occasionally sound like a premonition of Shostakovich. This is especially true in the scherzo, which is full of creepy-sounding special effects, and which in that respect marks an advance on, rather than a retreat from, the scherzo section of the Second. The Escher Quartet played both scherzos with greater delicacy than spookiness.

It takes special care and dedication to perform such a work with communicative feeling ...The Escher Quartet showed itself master of this work and all its predecessors.

Quartet No. 4, Op. 25 (1936) marks a further retreat or retrenchment from the Third. Written as a memorial to Alban Berg, it borrows the pattern of Berg’s Lyric Suite — a work dedicated to Zemlinsky — by being written in six short movements. Yet it sounds less like Berg’s music than either the Second or the Third do. Here the stillness and ostinato, the obsessed rhythmic patterns, and the lack of melodic expressiveness, reach their peak. Occasionally some emotive tension breaks out and rattles the cage a bit, though not often.

It takes special care and dedication to perform such a work with communicative feeling, especially at the end of a long concert filled with similar music. The Escher Quartet showed itself master of this work and all its predecessors. The last movement began with a long solo for cellist Dane Johansen, played with smooth confidence, an expansion on a tighter, more angular, and shorter solo in the finale of the Third Quartet. This concert introduced the audience to a composer who makes tough listening yet has a great deal worthwhile to say.

The concert was preceded by a Prelude Performance by the International Program artists of Menlo’s Chamber Music Institute, at Martin Family Hall across the way. It featured two fine performances by two sets of artists. A light traversal of Schumann’s Piano Quartet, Op. 47, followed by an altogether grittier version of Brahms’ dark Piano Trio No. 3, Op. 101, laid out the road that Zemlinsky took up with his Quartet No. 1.