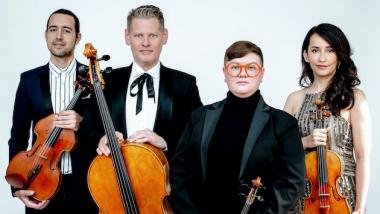 Samuel Coleridge-Taylor may not have been an American, but he is still among the multitudes of Black composers who have come up for revival in the past couple of years.

His mother was British, his father — who was descended from slaves freed by the evacuating British after the American Revolution — was from Sierra Leone, and he was once one of the more popular composers on the planet. His cantata Hiawatha’s Wedding Feast, part of a trilogy of Hiawatha works (he even named his son Hiawatha), was said to be tied with Mendelssohn’s Elijah and second only to Handel’s Messiah as the most often-played choral compositions in Britain.

Coleridge-Taylor made three trips to the U.S. where he was the toast of the town. He was invited to President Theodore Roosevelt’s White House, met with Paul Laurence Dunbar and W.E.B. Du Bois, and sought to integrate African musical influences into the classical mainstream of his time. His orchestral work The Bamboula, which he led in Carnegie Hall with the New York Philharmonic, uses a West Indies dance tune of that name, similar to one that Louis Moreau Gottschalk employed a half-century before. Alas, financial stress and overwork likely led to his death at 37 in 1912 from pneumonia after getting a lot of work done in a short time — 82 opus numbers worth.

Nowadays, Coleridge-Taylor is barely on the outermost fringes of the repertory. Even Hiawatha’s Wedding Feast has virtually disappeared from view (one fairly recent recording from 1984 led by Kenneth Alwyn (EMI) is long out of print, with used copies going for insane prices on Amazon — $725 to $902!). Racism, yes, might be one reason for his eclipse, but more likely is his position apart from the progressive trends of his time. Ultimately, a lot depends upon who gets to write the textbooks — and they tend to favor the trend-setters. 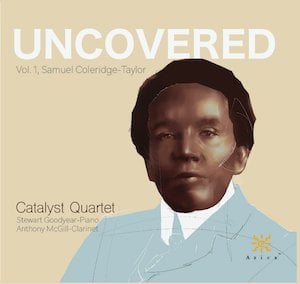 Nevertheless, Coleridge-Taylor is the focus of the first volume in Uncovered, a series initiated by the Catalyst Quartet to explore the chamber music of Black composers (Azica, download and stream only). As such, perhaps this isn’t the ideal way in which to enter Coleridge-Taylor’s world, for it concentrates upon pieces written when he was still Charles Villiers Stanford’s student as a teenager at the Royal College of Music. Granted they are astonishingly accomplished pieces for someone of that age or any age, but they are also greatly indebted to their role models, Brahms and  Dvořák; whatever African influences he was assimilating lay in the future.

The Piano Quintet and Fantasiestücke for string quartet lay buried in the archives until the late 1990s; the former work is an Op. 1 from Coleridge-Taylor’s 18th year. It strikes me as just very conventional, four-movement, fast-slow-fast-fast Romantic-period stuff, with Brahms as the primary motivator in the first two movements, and Dvořák in the way the Scherzo moves. The Fantasiestúcke Op. 5 is in five brief movements, less bound to sonata form, highlighted by the delightful third movement, a scherzo-like “Humoresque.” Yet it is not until the Op. 10 Clarinet Quintet that Coleridge-Taylor starts to produce some ideas of real originality, particularly the opening of the first movement and the 3/4 or 9/8 meter of the Scherzo, while still remaining well within the conventional molds of his academic upbringing.

All of it is beautifully played by the Catalyst Quartet and their distinguished guests, with pianist Stewart Goodyear providing expert, crisp work, and the New York Philharmonic’s Principal Clarinetist Anthony McGill weaving impeccably in and out of the string parts in solo and supporting roles. The music is certainly worth programming as listener-friendly period alternatives to the usual Brahms and Dvořák chamber music standards; they seem to be enjoyable vehicles for the musicians, too. But for any examples of Coleridge-Taylor’s real importance as a unique voice, we should wait until other corners of his catalogue are revived.

A Crowden School alumna is a co-founder of one of the laureate ensembles of the Sphinx Organization.

Catalyst Quartet Gets Down and Dirty at Kohl

The quartet shifted seamlessly between genres in a wide-ranging program.

There’s a lost world of music SFCV would like to help you discover, and we're going to make that happen in a series of articles.