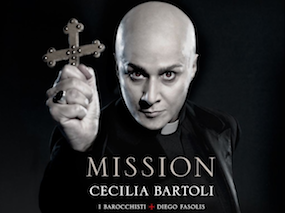 When mezzo-soprano Cecilia Bartoli first came on the scene, at age 23, the hype was so great that doubts surfaced immediately: Could she possibly be that good? As soon became clear, despite occasional concerns over her idiosyncratic coloratura technique and a tendency to express youthful excitement through audible exhalation, the answer was “yes.”

Now comes Bartoli’s latest project, recorded shortly before her 46th birthday. Based on years of research, it too is accompanied by an enormous PR campaign. Even before this Mission CD package hit the physical and virtual shelves on Oct. 2, and a high-resolution download (24-bit, 96 kHz sampling rate) became available at HDtracks.com, the recording was being streamed in lower-quality sound by NPR, and stories were appearing in publications that still devote space to classical music.

For Mission, Bartoli has unearthed and recorded the arias of Agostino Steffani (1654–last seen in 1728), an Italian-born choirboy/composer/diplomat/priest who lived in Germany from age 12. The CD, housed in a hardbound booklet a good ¾" thick, comes accompanied by at least 29 pages of essays, repeated in French and German; maps, copious photos, and illustrations; and, thank goodness, the Italian texts, again in three languages. As if that weren’t enough, the CD’s release is timed with the publication of Donna Leon’s novel, The Jewels of Paradise, inspired by the Mission Project. For all we know, Madonna will base her next road show on the recording.

Once again, it’s only natural to wonder whether Bartoli and Steffani are worthy of so much attention. Having listened to the tracks multiple times, I can only concur with the assertion, in the liner notes, that Steffani deserves to be considered as one of the finer Italian composers active in the period between Monteverdi and Vivaldi. The sheer breadth of his accomplishment, and his staggering ability to alternately grip you with excitement and utterly beguile the senses with seductive melodies, takes the breath away …

… Or at least when Bartoli is the lead singer and is joined by ensemble I Baroccchisti, Coro della Radiotelevisione svizzera, and the wonderful countertenor Philippe Jaroussky (who performs in four duets). Superbly conducted by Diego Fasolis, these artists make the best case imaginable for Steffani’s music.

Before Bartoli’s curtain-raiser steals the show, she transforms from warrior to kitten.

Bartoli is so filled with energy in her opening exhortation to ransack Rome, “Schiere invite, non tardate,” and so “guilty” of pushing her voice to its absolute limit, that she sounds as if she’s about to bust a gut. Perhaps that’s what it takes to hurl out her several high Bs with such startling force.

Before Bartoli’s curtain-raiser steals the show, she transforms from warrior to kitten. Adorable in “Sì, sì, riposa, o caro … Palpitanti sfere belle,” where she simulates drifting off to sleep; singing heavenly in the gorgeous aria “Notte amica al cieco Dio”; and contrasting wonderfully with Jaroussky in duets both serene and sensational, altogether she is a joy.

The care that Fasolis and I Baroccchisti have devoted to instrumentation deserves copious praise. Color and texture reign supreme, with instrumental combinations chosen to highlight the overtones in Bartoli’s voice. The recording itself won’t win any honors — Bartoli occasionally sounds as if she’s singing in another room and pasted atop the ensemble, and the big exclamations sound too closely miked — and the high-resolution download thankfully provides a better sense of breadth, depth, and dynamics. Yet it matters little before artistry so faultless. Given the quality of Steffani’s music, Bartoli’s project might best be regarded as “Mission Triumphant.”