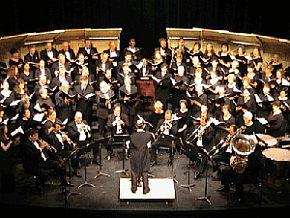 David Bratman on November 11, 2008
Masterworks Chorale, of San Mateo, stuffed Mozart's great big Mass in C Minor, K. 427, into the small confines of Trinity Presbyterian Church in San Carlos on Sunday afternoon. A lively and exciting time was had by all. It's easy to make a secularly appreciative remark like that about this Mass, which Mozart wrote in a burst of enthusiasm over his wedding to Constanze Weber. He composed plenty of virtuoso solo soprano parts for his bride to impress the congregation with when they performed the work in Salzburg in 1783. But she couldn't have sung all of them, because some sections require a pair of sopranos. The two fortunate soloists at this performance were Angela Cadelago and Elspeth Franks. Franks is a mezzo-soprano with a wide range. She was fast and lively in the solo in Laudamus Te, providing considerable characterization and shading of tone. Cadelago is a high soprano and sang the solos in the Kyrie and Et Incarnatus Est. Her rounded tone and very wide vibrato went with a much plainer interpretation. But Cadelago's voice was flexible: If the low A-flat in the Kyrie was a bit of a stretch for her, she had no trouble at all leaping up two octaves in the next bar. Franks naturally had a mezzo's greater strength in the low notes, and somewhat more grace in the ornaments. These two disparate voices made a good matched pair. Their duet in the Domine was technically assured, though I could have wished for a more thrilling rendition of Mozart's brilliant writing. The real winner was the Benedictus, with a quartet of soloists. Tenor Roderick Lowe (who also sang in the Quoniam trio) and baritone Paul Murray in the bass part joined them. Singing together was good for all of them, even Lowe, who had the weakest voice of the four. Their harmonized phrases were as colorful and charming as Mozart can get. I was sorry that the composer left the Mass incomplete, for I would have liked to hear more of the soloists — especially Murray, whose strong, clear voice combined the strengths of Cadelago and Franks. (We did get to hear more of Murray, actually. More on that below.) And not to forget the chorus in the back. Some 80 voices was just enough strength to give reasonable value to the divided double chorus that Mozart asks for in several numbers, and the space the chorus was tucked into was wide enough to create an antiphonal effect from the divided sopranos. Together they gave a solid, punctuated account of the Miserere section of Qui Tollis, a mighty cry of "Jesu Christe," and a wonderfully built crescendo during the Cum Sancto Spiritu. The long and complex Credo was fast and cheerful, with some weakness in the counterpoint but carried through in the end. The Masterworks Chorale Orchestra supplied solid support, bouncing through the dotted rhythms of Qui Tollis, with careful, precise conducting from Artistic Director Bryan Baker.

Before Mozart, a Thoughtful Premiere

Yet the Mozart was not all the program, by a long shot. The first half contained three works chosen for sharing, along with Mozart's Mass, an association with love, or marriage, or both. Five Hebrew Love Songs by Eric Whitacre sets tiny poems by his (then) future wife Hila Plitman. The flavor is Middle Eastern modal, mostly delicate and shimmering. The accompaniment came from violinist Brian Lee, pianist Inara Morgenstern, and a little hand percussion hidden discreetly away. The other choral work on the program was a premiere by one of the Chorale's own basses, Nicholas Carlozzi, who just turned 20 this year. He took a small, plain poem by his friend Lloyd-Nixie Melendres, titled The Moon and the Sprite, and gave it a thoughtful setting for solo soprano (sung by Cadelago), chorus, and intimate orchestra. Intricate trading off of leads, and rising and falling intensity, reflected water imagery in the poem. Carlozzi's orchestral scoring was straight out of the old Eastman School textbook, sweet and lush. His choral writing was well-geared to the Chorale's strengths. A better sound balance in the tricky matter of writing for soloist and chorus together will come with more practice, but if this is what he can do now, he will have plenty of opportunity to learn. Lastly, I was not expecting a choral concert to turn into a lieder recital, but it did. Paul Murray, that fine baritone in Mozart's Benedictus, sang the first seven songs from Schumann's Dichterliebe, accompanied on the piano by Baker. Dichterliebe has this in common with Mozart's Mass: that the composer wrote it in celebration of his wedding. Murray sang these strange, dour, and yearning Heine poems most impressively, in a clear, plain open tone, with character alternating from wistful to booming and heavy, as the texts suggested. I could have happily listened to Murray and Baker perform the rest of the cycle, or even an entire afternoon of Schumann songs.