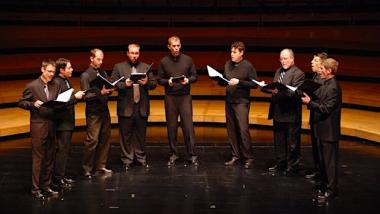 A Centenary Choral Tribute to the Suffragists

This past Saturday, Clerestory performed a “Suffragist” concert at the David Brower Center in Berkeley. The concert marked the centennial of the passing of the 19th Amendment, which guaranteed women the right to vote, and celebrated the achievements of those suffragists as well as contributions to the choral repertoire by female composers.

(As the program was originally titled “Suffragette,” countertenor Justin Montigne explained that an audience member had alerted them to the term’s historically pejorative nature, and the title was adjusted.)

The (mostly) male a cappella choir recognized that theirs may be a surprising voice to hear from in this context. However, their program was thoughtfully designed and very effective for the performers, positioning them as allies and supporters of women’s achievements. Concerts that are designed to embrace or highlight minority groups sometimes can be marginalizing; composers may worry that their presence on an all-women program boxes them in and detracts from their work being considered on its artistic merits alone. Clerestory’s repertory selections, guided by Dr. Magen Solomon, paid tribute to a long line of composers, living and dead, famous and largely unknown, classical and traditional, thus avoiding the potential pitfall of segregating them as a group.

Performances of Clara Schumann, Fanny Mendelssohn Hensel, and Alma Mahler marked composers familiar in the classical world, but they were joined by names such as Teodora Ginés — a 16th-century woman born a slave in the Dominican Republic, and credited with the creation of the son song form— and Florence Price, whose song “Resignation” follows in the tradition of African-American spirituals and allegorizes the centuries of hardship of black women.

Contemporary composers Ann Callaway and Anne Hege also were in attendance to hear performances of Silvery Blue and Thirteen Ways of Looking at a Blackbird, respectively. The selections were varied, exciting, and performed brilliantly by Clerestory. Particular highlights included Kevin Baum and Tonia D’Amelio’s duelling duet in Winning the Vote, in an arrangement created especially for this program by John Kelley, as well as Katherine Saxon’s intricate Tension, apprehension and dissention and Stacy Garrop’s thoughtful and touching Refuge.

Clerestory’s members are engaging, top vocalists, and the selections were well worthy of performance. Winning the Vote concluded with an earnest cry of “Go Vote!” to the audience, reminding us of the timeliness of this concert. With The New York Times’ unprecedented two-candidate endorsement of Elizabeth Warren and Amy Klobuchar in the presidential primaries, the message is clear: 100 years after the 19th Amendment, it is our duty to exercise this fundamental right, and it is time for women to lead.

Clerestory Takes on the Bard

Clerestory performs a program, "The Bard," based entirely on the words of William Shakespeare — musical settings of Shakespeare, written by composers mostly born in the 20th century.

Clerestory: The Cathedral and the Lady

The men's choir Clerestory, originally a splinter group from Chanticleer, is one of the less-known Bay Area treasures. If you've never looked in on them, here is a wonderful-sounding program about the music of Notre Dame Cathedral, Paris, presented in conjunction with Humanities West's seminar weekend.

The nine men of Clerestory have taken a daring step. For their first “studio-recorded” CD, laid down in the sanctuary of Berkeley’s Unitarian Universalist Church, they perform music inspired by the three closely aligned celebrations of Halloween, All Soul’s Day, and El día de los muertos.