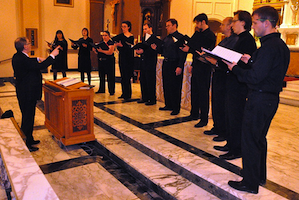 Chalice Consort performed Friday in San Francisco with its new Director, Ragnar Bohlin, known to Bay Area audiences as director of the San Francisco Symphony Chorus. The program consisted of Roman Catholic Tenebrae Responsories, by the 16th-century composer Tomás Luis de Victoria. The concert was held, appropriately, in an alcove of St. Mary's Cathedral, which will probably have dark Tenebrae services next week, to commemorate Thursday Judas' betrayal of Christ with a kiss, Friday the Crucifixion, and Saturday, burial and despair.

Chalice has sung this work before, but some new singers and a different distribution of the eight voices used for this concert gave it a new sound. The four women's voices, each individually strong, combined beautifully in one pure and blended sound. The men's voices were more individually distinctive, but that didn't bother me, especially since Victoria had given a number of expressive opening words to the second tenor, who sang them with passionate intensity.

The music for each set of responsories remained in the same key, and the Good Friday music was lowered by a fourth and sung only by the men — an expressive transposition for this particularly dark text, although it made me long for a deep Russian bass. The darker sound suited the music lamenting the crucifixion. Two of Jesus' "last words" were sung, expressively: an outcry, "My God, why have you forsaken me?" and "Father, into your hands I commend my spirit."

All voices, and the higher key, were back for the third set, and there were continued moments when the singers caught the expressive intent of the music: "See if any sorrow is like my sorrow," and a strong dissonance on "adversus Dominum" (against the Lord).

Bohlin used dynamics to good effect, but the range from very soft to very loud was not great — perhaps because there is a limit to how loud eight singers can sound, but probably even more, that there is a limit to how soft they can get in St. Mary's reverberant acoustic. No particular solo combination sounded out of tune, but the pitch had to be re-set from time to time, especially in the Thursday set.

The hour-long concert was given without break or applause. Prolonged applause at the end showed that this audience knew the story or had read the program notes and translations. Victoria's music is expressive, but his Biblical text was lengthy, written for an audience which knew the story in detail.

Eric Tuan's program notes were excellent. (And when he informed us that the Good Friday response would be transposed down a fourth, he introduced this reader to a new word: chiavette. You can Google it.) All eight singers were involved in a variety of solo ensembles, and all were excellent.