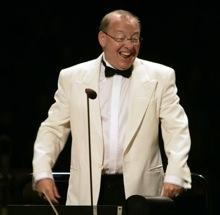 Charisma, Pipes, to the Fore

There's a powerful magnetism about a great professional countertenor, a singer who exhibits both fantastic vocal range and crystalline purity of tone. Once widely dismissed by opera-goers, countertenors now are spotlit especially in the Baroque repertory, taking on the leading roles originally assigned to castrati. Famous singers of this kind often embody what a writer at The New Yorker has termed a “matinee-idol countertenor” ideal — compelling musicality combined with a youthful, charismatic stage presence.

Within this realm, David Daniels has built an impressive career, with luscious tone and careful craftsmanship among his assets. But this artist is no mere pretty boy, as demonstrated in Philharmonia Baroque’s lively program Saturday at Berkeley’s First Congregational Church, under the baton of music director Nicholas McGegan. Daniels and the orchestra shone in an atmosphere ranging from somber stillness to sheer fun.

The haunting Vivaldi Stabat Mater on the PBO program sets only about half the famous Medieval text on Mary’s grief at the sacrifice of her son. With spare instrumental accompaniment accentuating themes of suffering and tragedy, this is one of the most sobering settings of the text in all the literature. Daniels’ performance was suitably understated, from his delicate phrasing of the opening section “Stabat mater dolorosa” (The grieving Mother stood) to the closing reiterations of “Amen,” earnest without giving way to overabundance.

David Daniels: The Bold, the Baroque, and the Braves

An interview With Nicholas McGegan

Handel’s operas anchor the countertenor repertory, and Daniels pleased the audience with selections from three such works. “Crede, l’uom ch’egli riposi” (Mortals think that Time is sleeping) from Il trionfo del Tempo e del Disinganno was refined and lyrical in its outer moments, florid and virtuosic in between. “Perfido, dì a quell’empio tiranno” (Deceitful one, say to the lawless tyrant) from Radamisto was delivered with pregnant conflagration, a carefully modulated rather than explosive anger. Eloquent duet lines with oboist Marc Schachman highlighted the passionate “Voi che udite il mio lamento” (You who hear my lament) from Agrippina, while a thrilling encore, “Qual nave smarrita” (Like some lost ship) from Radamisto, saw Daniels at his most vivid and dramatic.

The horns also featured prominently in this colorful program. In Telemann’s unusually scored Concerto for Three Horns and Violin in D Major, TWV 54:D2, violinist Carla Moore performed the sole non-brass solo part with smooth facility and a sweet tone. The horns suffered at times from inconsistency in their challenging parts, but R.J. Kelley had some nice moments in the principal chair.

Telemann’s “Alster Overture” (Suite in F Major, TWV 55:F11), an homage to the city of Hamburg, also assigns the horns a prominent role. Here the composer places his tongue firmly in cheek, infusing the piece with an array of humorous effects. Horn players Kelley, Paul Avril, Alexandra Cook, and John Boden dutifully mimicked the sound of bells in “The Hamburg Carillons,” while other instrumentalists joined the fun in movements such as “Village Music of the Alster Shepherds,” whose deliberately placed “wrong” notes elicited sly laughter from audience and performers alike. The orchestra, under McGegan’s giddy direction, handled all the effects with great mastery.