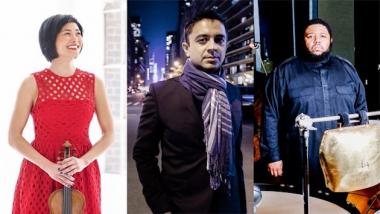 Violinist Jennifer Koh has used her abundant star power and resources to commission new works by a far-flung assortment of composers. Friday’s concert at Herbst Theatre, the second installment of SF Performances’ four-night PIVOT Festival, brought her together with two collaborators from her 2019 two-disc album Limitless (Cedille), a double dose of MacArthur Fellowship with Vijay Iyer and Tyshawn Sorey. Things did not go as planned.

Koh made a game-time decision to reconfigure the concert, switching the order of the pieces. And while Sorey is an extraordinary drummer who was credited in the program as a percussionist, there was not a drum kit on stage. Instead he made his musical contributions on a Shiedmayer celesta, an instrument with a distinctive chiming tone and a relatively short window of welcome.

But that’s jumping ahead. Playing with tonal and rhythmic precision, Koh opened the concert with a riveting rendition of Bach’s Partita No. 2 in D Minor. Making the most of the slow-fast-slow tempo shifts between the five movements, she provided a template for a concert that seemed to dwell on stark contrasts. But rather than exploring tempo and rhythm, the program offered an extended investigation into the power of extremely quiet dynamics.

Missy Mazzoli’s Dissolve, O my Heart, a piece Koh asked her to write in conversation with Bach’s Partita, opens with the famous, concluding D-minor chord from the Chaconne movement. The brief moment of self-contained consonance is the center to which nothing holds. Mazzoli’s zigzagging melody embraces entropy as it skitters and dissipates into a buzzy sigh.

In her brief remarks, Koh gently alluded to the present unpleasantness in Washington D.C., casting the program as seeking to build a sense of community and suggesting “a light at the end of the tunnel.” The communal reference came into play with Sorey’s solo set, which opened with an extended ethereal improvisation with no readily discernable melodic line that let each bell-like note hang in the air and slowly decay.

The solo piece served as an introduction for Sorey’s Koh commission, In Memoriam Muhal Richard Abrams, and she joined him for the tribute to the pianist, composer, and founding president of the Association for the Advancement of Creative Musicians. The piece sustained tension and interest with its creeping tempo and receding dynamics. While the celesta tolled for the late Abrams, Koh played softer and softer until her notes were almost subliminal.

The concert’s second half opened with an impromptu duo by Sorey and Iyer that unfolded as a tentative conversation rather than a deeply engaged dialogue. Replacing Sorey on stage, Koh played another Limitless commission, Andrew Norman’s “Cecilia” movement from his Pulitzer Prize-finalist composition, The Companion Guide to Rome. Per Norman’s score, she played the solo piece with her back facing the audience, and like much of the program, it dwelled at the extreme piano range, with whispered passages that could have lulled the namesake patroness of music into the hereafter.

Reorienting herself on stage, Koh stood in profile to the audience as Iyer, already seated at the piano, joined in for his Limitless commission The Diamond, a four-movement piece that opens with a cascading five-note figure. Inspired by Buddhist scriptures, the piece cycled through a disparate array of tempos and textures, visiting similarly ethereal spaces but concluding with a surging unison passage and a satisfying rumble.

The concert itself was less than satisfying. Master improvisers deeply engaged with the jazz tradition, Sorey and Iyer have both earned a good deal of respect in new music settings. Iyer served as music director for the 2017 Ojai Music Festival, where he premiered Trouble, a roiling violin concerto for Koh and chamber orchestra (a piece Cal Performances presented at Hertz Hall).

Given their musical backgrounds, it came as a surprise that the music most deeply engaged with rhythm and pulse was Bach’s Partita, music that reveals its connection to the dance floor with every passage. Given Iyer and Sorey’s kinetic work in other contexts, this Koh encounter felt a little undernourished.

SF Performances hosts the polymath composer/performer on Jan. 24 with Jennifer Koh and Vijay Iyer. He talks to SFCV about his evolving musical vision.

Koh delves deep into her profound connection with the Finnish composer and talks about a new project steeped in her family’s history.