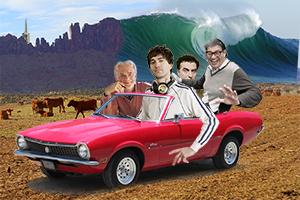 No orchestra members were needed for Bates’ piece: The virtuoso toccata and stop work of Paul Jacobs on the organ, the gorgeous voices of Ragnar Bohlin’s San Francisco Symphony Chorus conducted by Donato Cabrera, and the sonic contributions from Bates’ array of laptop and speakers provided a world of sounds equal to any symphony. Transmission is a setting of a 1928 short-wave radio conversation between a mother in the Netherlands and her daughter stationed as a colonial intern near Bandung, Dutch East Indies (Java). This was a technological and human breakthrough for a nation trying to keep in touch with its farflung possessions by switching its massive long-wave Morse Code facilities built for communications during World War I to voice.

Bates succeeds well in capturing the human side, the transmissions’ content, through consistently triadic choral writing, and some lovely, short solos by Alexandra Sessler and Danielle Reutter-Harrah. “I miss you, mum! I miss you too, my child.” looks prosaic in print, but is transformed into touching heartache by Bates’ music. In a central section, an unrelated description by another colonial of Java’s jungle sounds is likewise sensitively captured.

An issue — and an innovation — is Bates’ electronica as a tool for setting up a “scrim,” as he put it, between the communicating parties that represents the technology. The scrim of sound is both the conversation’s enabler and its interference. Bates accomplishes this with predictable static and sine-wave noises, but other, more creative sounds also intrude. Unlike in the actual 1928 transmissions (not played), the words themselves are undistorted when sung by the chorus, so the effect Bates sets up is artificial, conceptual. I got the concept right off, but, because of the beauty of the choral music, the electronica became annoying, and I wished that it were more subdued. On the other hand, the role of the organ, which could contribute both to the scrim side and the human side, was less jarring and extremely effective. Except for a few introductory bleeps to set the stage, I began wondering if the electronica was even necessary for the work’s affect, despite Bates’ evident mastery of its medium. Suffice it to say that the audience loved the music and gave it lusty cheers and a standing ovation upon its conclusion.

Next came Adams’ amazing concerto grosso, in effect, for string quartet and orchestra, on motives by Beethoven. To me it represented a new turn for the composer, harsher and less post-minimalist, and more complex, yet for the most part utterly engaging. The reason was the quality and familiarity of Beethoven’s nuggets — BUM-ba-dum from the 9th Symphony’s scherzo and five or more others from chamber works — plus Adams’ skill at orchestrating and transforming them into something completely new. The “jest” in the title comes from the meaning of scherzo, or “joke.” Absolute Jest, therefore, is a 24-minute scherzo on steroids. Occasionally, the work reaches a state of breakneck stasis, like a standing wave in a Class IV river rapid. At these points, the music is reminiscent of Stravinsky, whose Pulcinella suite, derived from Pergolesi, inspired Adams to apply the concept to Beethoven.

The Saint Lawrence String Quartet performed like champs with the frantically difficult music. The preconcert audience was told the quartet was amplified, and Mark Grey is listed in the program as the sound designer, but I still had trouble hearing the viola and cello over the orchestra. I felt as if I were running a water station at a marathon, so strong was the urge to give a bottle to the amazingly energetic and profusely sweating St. Lawrence first violinist Geoff Nuttall.

Adams impresses with new sounds added to his already large repertoire, and some passages that, true to the title, are laugh-out-loud funny. If new words are required for new sounds, I would propose “amokness” for the eye-opening brass passages about nine minutes in, magnificently realized by the Symphony players. At 16 minutes, weird horn trills cocked the ears, followed by a strange accelerando to the beat of “We’re off to see the Wizard.” We were certainly hearing one.

A tremendous ovation was awaiting MTT, Adams and the orchestra at the conclusion, adding another triumph to their illustrious careers. The successes of the commissions indicate, in addition to the blessings of extraordinary talent the two composers possess, audiences will respond well to music containing tasteful sentimentality (Bates) and easily memorable and repeating melodic germs (Adams/Beethoven).

Warm but lesser responses were generated by the works after intermission. Feldman’s Piano and Orchestra and Varèse’s Amériques were as far apart as Neptune and Mercury in the Modernist set of orbitals, though both 20-plus minutes long. Feldman’s had about one thousandth the number of notes as the Varèse, and one millionth the number of cumulative decibels. Tilson Thomas kindly explained to the audience members that they should take Feldman’s piece like an imaginary trip to an Abstract Expressionist art gallery. They should contemplate a canvas of delicately constructed tone-color blobs and discontinuous washes popping up here and there, sufficient unto themselves. “Try to sense the relationship between beautiful and special things,” Tilson Thomas advised.

I did, and enjoyed, but imagined how exciting the piece must have been for those few individuals with synesthesia, who see specific colors when they hear specific sounds. The music was best heard with eyes closed, so the spatial relationships associated with the sounds emanating from different parts of the stage could be appreciated as an organizing principle. I fell asleep before I could accomplish that feat, however, and awoke refreshed. I’m not sure why Emanuel Ax was the pianist: The piano part, while benefiting from the famous performer’s tact and delicacy, offered zero technical demands.

Those who envied the performing talents of the Symphony musicians tackling the next work misplaced their desires: They should have envied them their earplugs. Amériques, which lasts 10 minutes, contains some of the loudest music in the literature. It should have been called the “Too Much Information” symphony, with its 130 players blasting forth a brobdingnagian march during its last five minutes, among so many other noises. The first half, with a repeated melodic phrase in the Beethoven-Adams methodology, seemed more successful compositionally, despite too many sirens. Better integrated works of incredible loudness, both of which should be performed here, are Jon Leif’s Hekla and Christopher Rouse’s Gorgon.

Feldman is a significant composer for certain listeners of refinement. Varèse’s Amériques seems more a historical curiosity of the Roaring Twenties. Bates and Adams are composers who can reach large audiences of our age, and perhaps future ages as well. Whether they are all mavericks or not is immaterial: Together, they made for a fabulous concert.