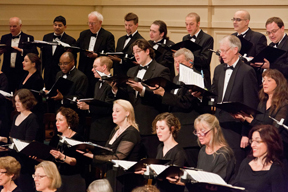 With the appointment of Dr. Magen Solomon as its new Artistic Director last June, the San Francisco Bach Choir has entered a new era.

A venerable Bay Area institution since its foundation in 1936, the SFBC is an auditioned community choir that is one of the oldest continuously performing choirs in the western United States.

Dr. Solomon has a wealth of experience as a teacher and conductor and she has been involved with, among others, the San Francisco Choral Artists, the Stockton Chorale and Master Chorale, and the Oakland Symphony Chorus. She also taught in the graduate and undergraduate programs of Choral and Sacred Music at the University of Southern California’s Thornton School of Music.

For her inaugural concert with the SF Bach Choir, last Sunday at Calvary Presbyterian Church in San Francisco, Solomon had assembled a program that she named “Splendida Musica Italiana: Psalms, Songs, and Canticles of the Italian Baroque”.

Even though this is a rather grand and sweeping moniker for a program that lasted just about 45 minutes, the performance gave a good indication of Solomon’s intentions and ambitions for SFBC — and mostly of the musical chemistry that exists between the choir members, musicians and their new director.

From the warm welcomes at the beginning of the concert and at the champagne reception afterwards, it is clear that Magen Solomon has found a new home at SFBC and that she is universally loved, admired, and respected. In a brief speech at the reception, she urged people to ‘support live music in any form,’ stressing the importance of ‘real live people singing in front of other real live people.’

It will take some time for the new relationship between Solomon and SFBC to come to full fruition. With Sunday’s sampling of rarely performed music from 17th century Italy, the concert showed Solomon’s penchant for innovative programming, and her congenial way of interacting with her musicians and singers; how she gently coaxes a nicely balanced and controlled sound from the 60-plus choir members with her graceful, balletic way of conducting.

Apart from works by Claudio Monteverdi (1567-1643) and Alessandro Scarlatti (1660-1725), Sunday’s concert program included two pieces by Italian-Jewish composer Salamone Rossi, both taken from his collection hashirim asher lish'lomo (The Songs of Solomon), of 1622-1623. This is music composed in a very recognizable late-Renaissance style, but with a Hebrew text. Both are set for unaccompanied choir.

The work that opened the concert was al naharot bavel (By the Rivers of Babylon), sung by the entire vocal ensemble, while the second Rossi piece, shir hama'alot (Ascending song), was performed by a chamber-sized group of singers, which showed a greater accuracy in the overall intonation and in the length and timing of syllables and syllabic transitions.

The choir left a very good impression with the wonderful six-movement Magnificat by Neapolitan composer Francesco Durante (1684-1755), which concluded Sunday’s concert. Not every musical detail was equally clear or well filled in, and the male voices were a bit brittle in their higher registers, but the performance had a spirit of grounded confidence that exudes great promise for the rest of Magen Solomon’s tenure at SFBC.