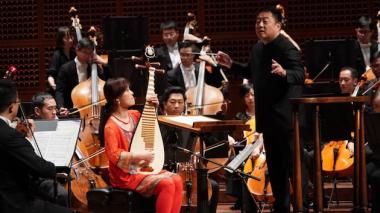 In the last decades, China has pumped billions of yuan into Western classical music, as evidenced by its recently constructed National Centre for the Performing Arts—a grand, space-age egg of a structure in Beijing that was specially built for performances of opera and symphony. In honor of the venue’s tenth anniversary, the China NCPA Orchestra made a six-city American tour, with a concert at Davies Hall this past Sunday.

Given the United States’s intermittently strained relationship with the PRC, it was impossible not to read multiple meanings into the concert — on the one hand, the event seemed to serve as a hand extended in good faith and a reaching out to the Bay Area’s enormous Chinese-American community, who made up the vast majority of the audience. Yet the evening also felt like a flexing of cultural muscle — a reminder that our superpower rival, in addition to holding its own in world politics and economics, is beginning to remake the musical playing field.

Evidence for China’s musical influence can be found in the sheer number of Chinese-born composers who have gained international success since the 1980s, many of them as expatriates carrying on their careers in less politically confining artistic environments. Sunday’s program opened with a work by Qigang Chen, who is based in France.

Like his Chinese-American colleagues, Tan Dun, Chen Yi, Zhou Long, and Bright Sheng, Chen infuses Western symphonic forms with the melodies and timbres of China’s classical idioms. The title of his 2015 Luan Tan, which translates to “chaotic music” or “random notes,” refers to a 17th-century style of theatrical music characterized by its folksy brashness.

Tan Dun excepted, there’s a tendency among Chinese composers to temper this style for Western audiences, who, since America’s first encounters with Cantonese opera during the Gold Rush, have unfairly dismissed Chinese opera as unrelenting and cacophonous.

Only in the last few bars of Chen’s piece did the composer give us a brief taste of authentic Luan Tan in the form of clacking woodblock and clanging jingbo cymbals. For the most part, however, these elements of traditional music were stylized beyond recognition — the jingbo player, for instance, was relegated to subdued clicks instead of allowing the cymbals’ unique timbre to ring out.

However, something as ambiguous as “authenticity” seems an unfair criterion upon which to judge a piece of music; after all, Chen is composing within a Western Classical context, drawing on the music of his homeland as one of many inspirations.

On the whole, the work is a highly entertaining (if not particularly innovative) set of orchestral dance variations in the spirit of Ravel’s Boléro. It opened with a catchy little temple block ostinato that continued to serve as a backbone for the composition as ostinatos for percussion, pizzicato strings, and woodwinds were slowly layered on. Swirling motives and head-bobbing rhythmic cells emerged, building momentum toward a Rite of Spring-style climax driven by warlike bass drum. In the hands of conductor Lü Jia, the thrilling wall of sound that resulted was at once triumphal and threatening.

Like his teacher, Olivier Messiaen, Chen paints with a wide palette of orchestral colors and instrumental combinations—at one point four mallet instruments (glockenspiel, marimba, vibes, and xylophone) played simultaneously, resulting in a marvelously jangling sonority. But Chen also seems to have inherited quite a bit from John Adams, especially the American composer’s syncopated, interlocking riffs. In fact, Luan Tan has much in common with Adams’s orchestral work The Chairman Dances, which musically depicts Mao Zedong foxtrotting with his wife Jiang Qing (though the state-funded China NCPA Orchestra would likely object to this comparison…).

The trans-Pacific theme continued with a concerto by Lou Harrison, whose 100th birthday anniversary is celebrated this year. Harrison contributed greatly to the East-meets-West phenomenon, merging Western classical and avant-garde music with the traditions of South Asia, Indonesia, Japan, and the Cantonese opera he heard in San Francisco during his youth. In 1997, Harrison composed a concerto for famed pipa player Wu Man, herself an icon of cultural crossover who has partnered with Philip Glass and the Kronos Quartet, among other American musicians. She joined the China NCPA Orchestra on Sunday to perform Harrison’s concerto, his last, large-scale orchestral composition before his death in 2003.

Unfortunately, it’s a rather lackluster work. Part of this has to do with Harrison’s incohesive structuring of the movements—a more-or-less conventional concerto-form movement gave way to a muddled suite of character pieces derived from diverse world musics. Wu skillfully imitated a mandolin in the “Neapolitan” portion, but her impression of a balalaika in “Troika” was less convincing. Ultimately, the concerto came across as a string of short, loosely related vignettes that offered little playing time for the soloist.

Harrison had studied pipa technique enough to come up with some lovely, idiomatic passages for Wu; but he failed to take advantage of her full virtuosity, which she finally had a chance to show off during her encore. Shi Kuang’s pipa classic White Snow in Spring displayed all the dazzling effects that were missing from the Harrison: sudden shifts in dynamics, graceful pitch bending, ghostly harmonics, snapping Bartók pizzicato, and gallop-like strumming. It was also nice to hear Wu play unobstructed by the massive string section of the China NCPA Orchestra, which covered her up through much of the concerto.

The orchestra’s tendency to overplay carried over into Brahms’s Fourth Symphony, with the strings rising to max volume at every climax of the first movement and the horns blasting their way through the second. This energy was better channeled into a rousing and jubilant rendition of the third movement as well as the encore piece, Brahms’s Hungarian Dance No. 6. Director Lü, an experienced opera conductor, imbued the fourth movement with a Mozartean sense of drama—in his hands, the inevitable return of the pillar-like passacaglia theme at the end of the finale took on the theatrical gravitas of the Commendatore’s hellish resurrection in Don Giovanni.

After a promising opening, the orchestra fizzles on Dvořák.