A Chinese Classic in European Style

Angela Hsiao on January 15, 2008
In an all-out effort to embrace modernity, China’s first Western-style opera, Farewell My Concubine, made its premiere this weekend at the San Francisco War Memorial Opera House. It marked the first time that a brand-new opera was presented in the United States by the China National Opera. Like me, the audience was consumed with great curiosity and anticipation about the new production, sung in Mandarin Chinese, which had premiered in China last October. For a Chinese audience, Farewell My Concubine is iconic and familiar — a classic, tragic love story. It was first performed in the traditional style by the Beijing opera icon Mei Lanfang in 1922. He popularized this particular play, out of his vast repertoire, with recordings, movies, and performances. The title alone resonates within the Chinese psyche as something hauntingly beautiful and heroic, evoking a mythic past. The opera embodies a nontraditional approach to Western-style Chinese opera. The composer, Xiao Bai, and the playwright, Wang Jian, have taken on a difficult task, setting this epic tragedy to a completely new form of music, shedding traditional musical ideas, and yet making the work cohesive, musically and dramatically, while keeping the narrative intact. Theirs is a serious attempt at juggling all these demands. The result was problematic, but not without strengths.

An Unusual Mix of Styles

Xiao’s music is not lyrical in any sense, whether European or Chinese. It is a curious blend of modern (close to atonal) and Hollywood movie soundtrack. A highlight of the first act is the chorus of slaves, which provided much-needed musical texture and strength. The libretto works well with the music on a fundamental level.“It’s the fire of hatred, it’s the fire of victory, burn, burn,” the chorus sang. But more eloquent writing might have conjured up a poetic sense of the Songs of Chu for which King Xiang Yu’s homeland was renowned, some 2,000 years ago. The first act opens with the two principal singers, Sun Li as King Xiang Yu and Ruan Yuqun as the concubine Yu Ji, onstage as Xiang’s army gets ready for battle. As Ruan sang her first note, we knew that we were in the presence of an exceptional soprano. Her singing as well as her stage presence reminded me of a young Joan Sutherland. There was an undeniable, natural musicality and intensity in her performance. As a finale to this first scene, the fall and collapse of the Qin’s city wall was a visual spectacle. 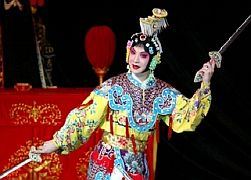 The second act, subtitled “The Ambush,” is a far more problematic piece, on several levels. The impending ambush leading up to the climatic double suicide demands a sense of foreboding, the haunting beauty and passion of love lost. Inexplicably, the music was rather flat and dispassionate, totally inadequate. The duet between Xiang and Yu Ji, like an earlier duet for the male leads in Act 1, was dramatically static and uninvolving, and musically cold. Sun’s rendition of Xiang Yu only came alive in the death scene of his beloved concubine. He sang a short lamentation about love and regret, with just enough lyricism. On the other hand, the King’s renowned arrogance and paranoia, his sense of bravura, and the inevitability of doom were in short supply. The saving grace was Ruan, who somehow broke through the limitations of the music and came out sounding great, with vocal refinement giving substance to her interpretation.

A Great Singer in an Underwritten Role

We know from history that Yu Ji, the concubine, was a great beauty from the ancient state of Chu who was accomplished in singing, dancing, poetry, and swordplay. Her fighting ability and acute sense of battle strategy allowed her to accompany her lord in battle for eight years. If these qualities were incorporated into her operatic character, wouldn’t the role be enriched and deepened? Certainly it would have given Ruan more opportunity to show off her talents. The other pivotal role of Han Xin (the brother-turned-antagonist who finally defeats King Xiang) was played by tenor Li Shuang. The writing was more in a baritone’s register, and Li inevitably found it confining. The youthful orchestra, led by conductor Yu Feng, was full of exuberance and bravura. For the American audience, this truly East-meets-West extravaganza of an opera, with its colorful staging and costumes, may be the ticket to a different view of “exotic” Asia than the one they have inherited from beloved masterpieces like Madama Butterfly, Aida, and Turandot. For China, having being catapulted center-stage by the Olympic Games and its economic success, the opera is an ambitious and daring attempt to bring about a similar cultural effect — to attract attention on the world’s stage. It was well-done for a first try, and makes me look forward to more of these artistic innovations and cultural exchanges. The opera is presented by the Chinese American Inter-Cultural Exchange Foundation, and will tour five cities after San Francisco: Pasadena, Calif.; Washington, D.C.; New York; Houston; and Dallas.
Angela Hsiao teaches and lectures on Chinese art and culture in the Bay Area. She was the art critic on Arts Circle for Radio Singapore and has given art exhibitions. She is also an accomplished Chinese opera singer and performs in Hong Kong, Taiwan, and China. She founded the Mei Lanfang Society of San Francisco and has an M.A. from UC Berkeley in Asian studies and a B.A. in painting from Hunter College, City University of New York.