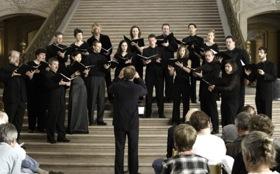 Choral Dancing on a High Wire

Don Kaplan on March 2, 2010
What can you expect from a chorus whose motto is “singing without a net”? Certainly not sea chanteys or singers standing solemnly on risers. Instead, audiences attending Volti’s memorable concert Saturday at St. Mark’s Lutheran Church in San Francisco found themselves Shoveling Snow With Buddha; encountering Gossiping Women; listening to freely tonal, microtonal, and atonal music; and performing some music themselves.

Volti (from the musical term volti subito, which directs musicians to “turn [the page] quickly” or “look ahead”) has been around for 31 years under the leadership of founder and Artistic Director Robert Geary. Like the similarly forward-looking Kronos Quartet, Volti actively commissions pieces by established and emerging composers from the U.S. and around the world. According to Geary, Volti is the “R&D arm of the choral world.” Geary wants to “use new music to open up sound spaces and horizons in your head; to help audiences see the potential for choral music.”

The 20-voice a cappella chorus aims to intrigue audiences by avoiding the usual “safety nets” of choral music — religious contexts, familiar poetry, instrumental support, functional harmony, traditional vocal techniques — so as to move audiences beyond conventional boundaries and comfort zones. In keeping with those goals, Saturday’s program of mostly Asian and Latin influences featured three world premieres and a West Coast premiere. The program also included performances by Ensemble, a group from the Piedmont East Bay Children’s Choir (another chorus that Geary conducts).

Avant-garde techniques of the 1960s and ’70s generally sound exactly like what they were: experiments. Contemporary composers, though, are now using those techniques in musically satisfying ways, as demonstrated by Volti’s excellent and varied program. For example, the first piece on the program, Felipe Pérez-Santiago’s Pronto Desaparaceremos, required a soloist to face the audience while the chorus sang from the balcony. After the solo started (nicely performed by Lindsey McLennan), additional voices came from above and behind, creating a beautiful effect as they filled the space with sound.

Orlando Jacinto García’s el sonido dulce de tu voz also used directional sounds as an integral part of the composition. The singers, spread around the stage, seemed to suspend time as they whispered, hummed, and sang lyrical fragments and clusters of notes. The effect was both delicate (despite the dissonances) and haunting. Olli Kortekangas’ Ikikaiku (Eternal echo) had the children’s chorus walking around the stage, creating constantly shifting sounds like a musical mobile. After the music built to a loud climax, the audience was encouraged to join the soundscape by echoing the performers’ quiet, lyrical singing.

Other pieces relied more heavily on fragmented texts. The best of these was Jean Ahn’s dramatic Zêtêo (To seek). According to the composer, musical shapes and harmonies are more important than actual word meanings. For Ahn, seeking is a hardship, and “perseverance must be endured on the path to the ending of the piece where we are granted the gift of God.” The music clearly followed the struggle by employing various vocal effects, such as two sopranos singing a quarter tone apart, vowels sung through the nose, fragmented words, and lyrics passed among voices to gradually increase tension as we listeners followed the path. György Ligeti’s Két kánon (Two canons) seemed conventional in comparison, though the second canon, ”Gossiping Women,” effectively used word sounds to create a lively chatter. It had a conversational element similar to Ernst Toch’s famous “spoken music” from the 1930s.

As for the rest of the program, Yu-Hui Chang’s Being: Two Collins Songs was the least dramatic composition. “The Night House,” set to a wonderful poem by Billy Collins, was based on freely shifting tonalities and beautifully performed; Shoveling Snow With Buddha was also well-performed but, like its companion piece, was not as appealing on first hearing as some of the other compositions. The concluding work was Mark Winges’ complex Luna, Nova Luna for joint adult and children’s choirs. Here, moon poems became the basis for spiritual music. Winges used chromatics, fragmented texts, slides, yelps, and an especially effective device — having one chorus on stage face front while the other faces away — to create sound contrasts.

Both choruses performed this difficult music with skill, technique, and poise under Geary’s leadership. The performances by both choruses were impeccable. Although there initially seemed to be some balance problems with singers in the balcony (probably because of the acoustics), no balance problems were evident during the rest of the program.

Will these pieces move you like a Puccini aria? Probably not. But they will clean your ears and encourage you to listen in new directions, and they may draw you back for subsequent hearings and enjoyment. As part of the text to Shoveling Snow With Buddha goes, “This is so much better than a sermon in church ...” And indeed it is.