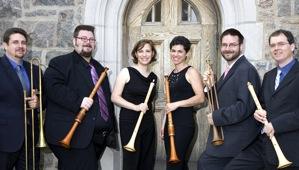 This year’s holiday concerts by the San Francisco Early Music Society brought a number of unusual sounds to Bay Area audiences. Sunday’s concert at St. Mark’s Lutheran Church in San Francisco presented the instruments and voices of Ciaramella, an ensemble dedicated to music of the 15th century, in a program called “A Piper’s Noel” that raised joyous sounds from bagpipes, shawms, recorders, sackbuts, slide trumpets, percussion, and voices.

Although none of these instruments is strange to aficionados of Renaissance wind bands, their appearances on modern concert stages are far fewer than those of later “early music” instruments. Ciaramella, directed by Adam and Rotem Gilbert, demonstrated not just how appropriate these sounds are to the celebratory Renaissance music of the Christmas season, but how pleasing they can be to modern audiences.

The ensemble’s program traversed several countries of 15th-century Europe, offering musical selections drawn from all portions of the Christmas story — from Annunciation to Epiphany. The program interspersed music for varying smaller ensembles, whether of voices, instruments, or both, with music for the full ensemble. This construction allowed the audience to appreciate all the instruments on their own and in combinations, and additionally offered an exciting exploration of the ways in which the different timbres complemented each other.

The frequent instrumentation changes not only gave a welcome ebb and flow to the overall sonority, but were also especially effective when used within a single piece. Ciaramella’s arrangement of Adam von Fulda’s Dies est laetitiae was particularly compelling in this regard, allowing each instrument’s qualities to take the spotlight in successive verses. The piece began with two shawms, continued with unison singing and sackbut counterpoint, unfolded into four-part harmony with sackbut counterpoint followed by a shawm and sackbut ensemble, and ended with shawms, sackbuts, and singers.

In this and most other pieces on the program, the stellar musical skills of Ciaramella’s performers shone. Polyphonic lines emerged with clarity and sprightly rhythms abounded in the anonymous Italian work Vidimus enim stellam featuring shawms (A. Gilbert, Doug Milliken) and sackbuts (Greg Ingles, Erik Schmalz), Alexandre Agricola’s Crions noel with three recorders (A. Gilbert, R. Gilbert, Milliken), and Antonie Brumel’s Noe, noe featuring the four singers (Dylan Hostetter, N. Lincoln Hanks, Joel Nesvadba, Jinyoung Jang) with the sackbuts. The musicians’ virtuosic skills were on display in two anonymous English pieces, Now Makë We Joy for the four voices, and the elaborate divisions of Greensleeves on a Ground for two recorders (A. Gilbert, R. Gilbert). The players also showed particular sensitivity to the overall ensemble, even staying impeccably together and creating beautiful musical lines over the very loud and lengthy ringing of an audience member’s cell phone during Agricola’s Comme femme desconfortée. The singers aptly demonstrated the same commitment to the ensemble in harmonized passages, though were less successful in the unmetered chant.

The Wake-Up Call of the Shawm

One challenge of this concert was the volume of the shawms. Adam Gilbert told the audience that shawms had been used in churches, particularly in Spain, during the Renaissance. Yet despite this assurance, and despite Ciaramella’s agile playing, it took nearly the whole concert before I became used to their loudness in the interior of the church, and could fully appreciate their contributions to the texture. The bagpipes, by contrast, did not overwhelm the ear with volume, and their presence gave requisite flair to both the Flemish drinking song Rostiboli gioioso and the Sicilian bagpiper’s hymn Canzone d’i Zampognari. The final piece on the program, a 19th-century American shape-note hymn called The Babe of Bethlehem, shared this bagpipe sonority and its flair. Its open harmonies matched much of the 15th-century music on the program, but in context, it made for a shorter foray into this repertoire than I would have appreciated.

Ciaramella acknowledged the audience’s enthusiastic response to this program with an encore of the Canzone d’i Zampognari, and even invited the audience to sing along. The hymn’s tune is familiar to many modern listeners as the melody of And he shall feed his flock from Handel’s Messiah, and many in the audience did bravely join in for a verse or two (though largely leaving the Italian to Ciaramella’s singers). This vibrant canzone perfectly captured the peace, wonder, and joy of the Christmas story, and made a delightful end to a joyous afternoon.

Kaneez Munjee is a singer, writer, and editor. She holds a Ph.D. in musicology from Stanford University, and specializes in late 17th- and early 18th-century French music.

Chanticleer: Voices of the Stars