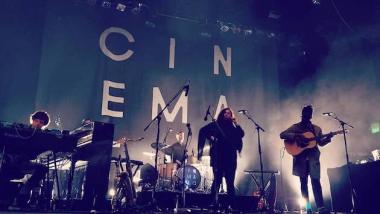 The Cinematic Orchestra Ventures Back Into Jazz

Britain’s enigmatic, multistyled, electro-acoustic band, The Cinematic Orchestra — in existence since 1999 — hadn’t toured the States in more than a decade, nor had they put out a new studio album since 2007’s Ma Fleur. But they came busting out of their sabbatical this year with a new album, To Believe, and an international tour schedule that began in Brussels in March and culminated in Walt Disney Concert Hall Saturday night, Nov. 23.

For me, the concert was a rebirth of the promise that the band, founded and piloted by Jason Swinscoe, showed in its first album, Motion, which fused looped, steadily building jazz grooves with electronica — best heard on Motion’s very first track, “Ode to the Big Sea.” Gradually, from album to album, the jazz elements receded, leaving mostly moody soundscapes, often with vocals, that may have been more in tune with the word “cinematic” yet didn’t strike me as much more than background music. Much of To Believe, alas, continues that pattern. Yet according to the otherwise uninformative bio in the program, Swinscoe had been spending some time absorbing the emerging L.A. progressive jazz scene recently, and that probably had an effect on the band’s performance on the Disney Hall stage.

First number out of the chute, we heard a loop repeating a rhythmic pattern. Then Luke Flowers’s drums came in, disrupting and clashing with the loop in a groove of his own. Gradually other instrumental threads entered the stack of sound that kept building and building. A string quartet could be seen in the rear of the stage, but not clearly heard in the sonic din (they would be more audible later in the show). Then Tom Chant laid some scorching tenor sax on top of the stack, summoning the fierceness of Pharoah Sanders from his New Thing period.

The jazz components in the Cinematic Orchestra sound were back, and they would continue to surface in patches during the rest of the 80-minute set. In a number referred to on a set list website as “Sax Loop,” Chant recorded a riff on tenor sax and then gradually overlaid additional solos onto multiple tracks, creating a contrapuntal composition for jazz sax choir on the spot which, with the addition of synthesizer lines, became a fascinating sonic soup. Later, a repeated bass riff, coupled with sampled voice, led to a terrific run of free jazz with Chant wailing in the lead. There were some walkouts in the audience after that flurry, but that’s their loss.

Elsewhere, there were interludes of the mellower Cinematic Orchestra manner with dusky vocals by Heidi Vogel a la Cleo Laine. Moses Sumney turned up with a guest vocal in gentle falsetto tones near the end of the set. In the lengthy set closer, “A Promise,” the Cinematic Orchestra managed to have it both ways. Starting with a mood piece with vocals by Vogel, a shift in the rhythm to rapid drumming on a mounted tambourine relaunched the CO method of building an imposing musical edifice piece by piece, with tenor sax, short streaks of electronics, and at last some imaginative parts for the strings completing the structure.

Earlier, a DJ who calls himself Photay (a.k.a. Evan Shornstein) set some rather catchy, often attractive melodic grooves with electronics and digital drums to open the show even before the lights went down. He was followed by singer/keyboardist Patrick Watson, a disheveled-looking, somewhat eccentric performer whose sensitive soft-rock set, sung in falsetto, didn’t light any fires with me. Watson would turn up again during The Cinematic Orchestra’s encore, backed only by the string quartet and bass.

The Piano Musings of Scott Wollschleger