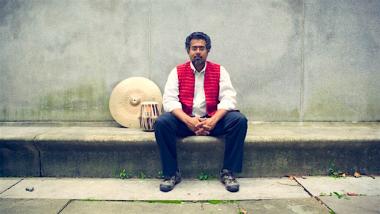 Circling Up With Sameer Gupta

On the last night of a California tour celebrating the release of his enthralling album A Circle Has No Beginning, Sameer Gupta gave a master class in the cumulative power of letting very different players find their own shapes in an ensemble.

Making his debut performance Sunday night at Berkeley’s venerable Freight & Salvage, the Fremont-raised percussionist surrounded himself with musicians representing just about every creative circle that has rippled out from his drums, from the Bay Area to Brooklyn. More than a bicoastal confab or an East-meets-West fusion of classical Indian music and jazz, Gupta’s project provided a wondrously idiosyncratic forum for loosely structured group improvisation.

Whether playing Gupta’s sturdy, emotionally acute melodies, sweeping Bollywood themes, or tunes distilled from classical Indian modes, the eight-piece ensemble navigated the pieces with supple grace, performing each piece as a journey with unexpected vistas and quiet interludes. Octets usually require a good deal of arrangement or at least a detailed game plan to prevent train wrecks, sonic clotting, or messy segues. But with Gupta supplying a shimmering pulse on his cymbals, the musicians phased in and out, often signaled to join a smaller configuration by his head nod or pointed finger.

Coming up in the Bay Area in the early 1990s, Gupta apprenticed under some of San Francisco’s surviving beboppers, most importantly saxophonist Bishop Norman Williams. By the time Gupta left for New York in 2008, he had become a creative force in several respected collective bands and gained national attention as member of New York pianist Marc Cary’s Focus Trio. The community-building ethos he absorbed on the Bay Area scene has paid major dividends in New York, where he co-founded Brooklyn Raga Massive, a collective that brings together musicians devoted to classical Indian music.

From the Bay Area, Gupta was joined at the Freight by Broun Fellinis saxophonist David Boyce, a fellow sonic seeker with whom Gupta performed widely and recorded with the Supplicants, a spiritually charged free-jazz ensemble. While he didn’t take a solo during the course of the evening, his strategic real-time electronic sound design added buzzy textures, drones, and chiming effects.

The out of towners were equally effective. Electric bassist Rahsaan Carter contributed an elastic pulse and melodic counterlines when other players filled up the bottom. Bassoonist Sara Schoenbeck, who spent years on the Bay Area new-music scene before moving to Brooklyn, is a recent addition to Gupta’s circle, and she thrived playing serpentine low-end lines or phrasing with Radhakrishnan on a rapturous Bollywood theme. Joining her in shoring up the bottom end and playing several ravishing solos was cellist Marika Hughes, who spent her formative years as a professional in the Bay Area before returning to her native New York.

The music could feel elegiac, like on Gupta’s gently rolling “Taiwa (For Moses Molelekwa),” a piece written in memory of the tragically short-lived South African jazz pianist. Hammond opened with a stinging slide guitar, and as the full ensemble joined, the sing-song melodic cycle emerged. Just about every musician took a turn playing the theme, but rather than using it as a point of departure for extended improvisation, each player rendered the melody in their own instrumental voice.

The rhythm section hookup between Gupta and Carter made every piece feel like dance music, with a kaleidoscopic array of voicings and textures. Gupta’s ability to embrace and draw energy from disparate sources came into clearer focus when the ensemble was joined by Malian vocalist Awa Sangho and percussionist Daniel Moreno, Brooklyn colleagues who happened to be in town. A griot with a regal presence and clarion delivery, she offered a praise song as the ensemble rolled along behind her.

With so many specific traditions front and center, calling Gupta’s ensemble “world music” would obscure more than inform, except that the encompassing format seems capable of including sounds from around the globe. Precisely detailed and miraculously open, carefully calibrated but gleefully freewheeling, Gupta’s circle is rolling in the right direction.