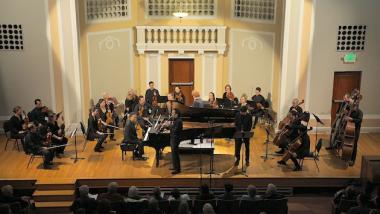 The tiny stage of the Trianon Theatre was packed with concerto soloists at the conclusion of the San José Chamber Orchestra concert on Sunday. Pianist Jon Nakamatsu and father-and-son clarinetists Jon and Alec Manasse returned to the stage to play together in a specially commissioned encore piece to celebrate their all having played full concertos earlier on.

Nakamatsu, always up for appearing in small-scale concerts when he’s at home in the South Bay, had performed Beethoven’s Piano Concerto No. 4. Jon Manasse played Copland’s Clarinet Concerto, written for Benny Goodman, and was joined by his son Alec for a little-known Mendelssohn work for two clarinets.

In such a small venue as the Trianon, Nakamatsu kept a soft and gentle touch on a full-sized Steinway for his Beethoven, with occasional excursions into reasonable fortes. He played with pure evenly-paced lyricism in the first movement’s second theme and in the Andante. Clouds of furry overtones rose from light and tripping runs of notes. A pianist as great as Nakamatsu will always give a fine performance, no matter how restricted the setting.

The orchestra, under its music director, Barbara Day Turner, had an unusual role in this. The San José Chamber Orchestra is a strings group, but Beethoven’s Fourth is not a concerto for soloist and strings. So instead of Beethoven’s original full orchestration, this concert offered a beefed-up edition of a chamber arrangement for piano and string quartet dating from Beethoven’s own time. The string playing was gritty and vigorous, with plenty of variation in tone color. This made up surprisingly well for the lack of winds. This playing style was on even clearer display in the orchestra’s one non-concerto outing, the lively and agreeable finale “Coqueteos” from Gabriela Lena Frank’s suite Leyendas: An Andean Walkabout. Concertmaster Liana Bérubé and other soloists made flavorful contributions.

Jon Manasse’s clarinet was featured in the Copland, which is a concerto for soloist and strings (plus harp and piano). Of its two movements, the first is all quiet Copland pastorale, while the second tries to be Benny Goodman with Latin-tinged jazz. In between comes a cadenza. Here Manasse put most forthrightly on display his smooth and gliding tone, expressively making every phrase and run of notes count. His sound is rich on the low end and airy at the top, with a strong break in between. Throughout the concerto he was physically expressive, frequently wandering about, and turning to direct specific phrases to Turner on his left or Bérubé on his right.

Alec Manasse, who is 20 and already has much concerto and chamber music experience behind him, joined his father for Mendelssohn’s Concert Piece No. 1 in F, Op. 113, a tiny three-movement concerto. Mendelssohn wrote it for B-flat clarinet and basset horn, the latter a deeper-toned, related instrument uncommon today. Alec Manasse played that part on another B-flat clarinet. Having two identical instruments gave the unison passages in the Andante a rich, pure, unvariegated sound. In the call-and-response phrases that dominated the rest of the concerto, the soloists tamped down Mendelssohn’s characteristic frothiness while still embracing a lively wit that made the piece speed along.

Although a full-orchestra version of the Concert Piece exists, arranger Michael Touchi (who is also the orchestra’s pianist) produced this string orchestra version from the piano score. Touchi also composed that three-soloist encore, which he titled Fantasia in Klezmer. It’s a six-minute romp with plenty of light wailing for the clarinets in the klezmer mode. The principal melody, sent through variations in the piano, is the Hebrew song “Hevenu Shalom Aleichem” (We brought peace unto you). I also caught brief look-ins from the Grieg Piano Concerto, Swan Lake, and Fiddler on the Roof. It made a lively ribbon to wrap around the end of the concert.

The pianist was eloquent, both speaking and playing, in a big recital.