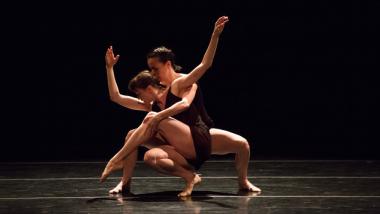 In 2016, San Francisco Ballet soloist James Sofranko grabbed courage with both hands and started his own dance repertory company, using an underpinning of classical technique and discipline for contemporary dance, not a pointe shoe in sight. He planned, he saved, he gathered funding and donors to bring in the dancers and choreographers he wanted. He left S.F. Ballet in 2018, after 18 years with the company, becoming artistic director of the Grand Rapids (MI) Ballet while continuing with SFDanceworks.

For its fourth season, which opened Thursday night at Fort Mason’s Cowell Theater and ended Saturday, Sofranko — with Danielle Rowe as associate artistic director — presented a mostly new company of seven dancers performing five premieres and recent works, hewing to his founding principles and preferences with substantially fine results. Outside, overlooking the bay, it was cold and windy; inside, despite a small audience, the troupe generated palpable warmth.

Although some have danced or studied together in various companies and schools, the dancers and dancemakers have spent little time rehearsing the show, having gathered from all over. So the program’s artistry and professionalism on a tight budget and timetable owes much to their individual talent and skill as well as to what might be considered the good bones of the works they’re performing and a backstage team that knows its stuff.

Interestingly, two of the dances take as their theme bipolar disorder. The opener, Laura O’Malley’s Room for Error, presents a scenario that lets us see a man’s relationship with himself, O’Malley said. She drew on the struggles of the pianist Glenn Gould for inspiration. Nicholas Korkos plays the central character, struggling physically, emotionally, and viscerally, with David Calhoun playing his doppelganger/ alter ego/ antagonist /companion. Katie Lake is the concerned friend, or perhaps wife or relative. All of it is vague, and yet all of it feels possible, including its chances of resolution, or at least respite. What’s beyond question is the commitment and interaction of the dancers, moving to a compilation of composers, baroque to contemporary, starting with Bach.

Andrea Schermoly’s It’s Uncle, like Room for Error a world premiere, takes a nigh-slapstick, broadly antic entree to bipolar disorder without shorting its devastating outcomes. There’s a little blue gun, which moves things into a world of confusion and chaos, leading to despair and nihilism. The dancers are Andrew Brader, a wonderfully wild, outsized presence as Uncle; Korkos, Calhoun, Katerina Eng, and Katie Lake against a taped medley.

The Bedroom, the third world premiere, choreographed by Brett Conway, a product of  Lines and Nederlands Dans Theater, is a remarkably wide-ranging look at love and life within a small but changing space, a bedroom where the bed is made, unmade, disassembled, moved, leaped upon singularly or in couples. A chair’s splats become a hat; things are funny until they’re not, intimate until they’re chilly. In other words, through close-held movement and calculated separation, everything happens. Sometimes enough happens to induce laughter or tears. The music is by Sufjan Stevens, Jean-Philippe Rameau, Luke Howard, and Keynvor, and the dancers are Dennis Adams-Zivolich, Eng, Babatunji Johnson and O’Malley. There was also a poem, by Cristina Garcia, that included this: “A little of everything reminds me of this room/ It begins with the body, ends with the body…” And so it does.

Alejandro Cerrudo’s lovely Cloudless, a complex and close-held dance for two women, Ana Lopez and O’Malley, includes difficult, interlocking poses held with devotion and an overriding sense of intimacy as well a as mutually enabling and ennobling grace. The music is by Nils Frahm.

The dancers cuddle and frolic in vivacious, carefully arranged pileups and kicklines. The fantasy fades, though, as they fall grimly into lockstep, under the sway of an evil Fascist. Despite its clever moves, it felt like a little too much sturm und drag, delivered at ear-splitting levels. Still, it showcased Wevers’ perceptive observations, witty dance making, and contagious, loving regard for a much-missed art form. Silents are golden.

The troupe’s mélange of percussive dance with cutting-edge electronics and live music brings down the house at Yerba Buena Center for the Arts.

The choreographer’s humanity and storytelling ability combine with superb performances.

The Spirit of Alvin Ailey Rises and Dances in Lazarus

Rennie Harris’s tribute to the late choreographer is a must-see.