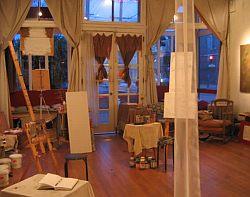 Rebecca Liao on September 8, 2009
A small crowd gathers at the corner of Folsom and 23rd streets in San Francisco Thursday night, waiting to be let into Classical Revolution’s chamber music performance at the Red Poppy Art House. A man passing by recognizes the signs of an event and stops to ask someone in the crowd what’s going on. They talk at length, but no luck; the man leaves.

A little before 8 p.m., the doors open, and I run into Charith Premawardhana, founder and director of Classical Revolution, and Todd Brown, founder, director, and resident artist at Red Poppy. Their partnership has been a success: Classical Revolution was named a 2009 resident artist at the venue, where it will perform on the first Thursday of every month for the entire year.

The program began with Bach’s Cello Suite No.1 in G Major, as arranged for violin and cello by Bay Area composer Beeri Moalem, featuring violinist Elizabeth Choi and cellist Hannah Addario-Berry in their first collaboration as the duo Navitas. Moalem’s compositional method is technically artful, using imitation in the violin part to inject harmony and dialogue that Bach’s counterpoint could only imply. In practice, however, Choi consistently overpowered Addario-Berry, sounding louder and more confident. The easy melodic progression of the violin part drowned out the complex movement of Bach’s arpeggiated chords. It did not help that Addario-Berry played tentatively and did not articulate notes with authority.

Ravel’s Sonata for Violin and Cello further tested the duo’s ability to communicate with one another. With strong melody and counterpoint, this sonata clearly establishes interplay between the two instruments. Its angular motif and pizzicato demand strong attacks by both instruments, and the audience burst into gleeful smiles at the no-holds-barred performance. In the third movement, though, it became clear that this group’s weakness is adagio. Neither player maintained a legato line cleanly or convincingly. It’s possible they aimed for tenderness and lyricism, but the result was a meandering exploration that seemed more searching than reflective.

Emotions to the Fore

The second part of the evening featured lyric tenor Samuel Levine and pianist Ian Scarfe in selections from two song-cycles: Schubert’s Winterreise and Schumann’s Dichterliebe. Levine has a solidly muscular, lyric voice, but his dramatic ability carried his performance. Subtle shifts in his gaze and the color of his voice conveyed the gamut of emotions, from tenderness to suicidal despair. This ability was well-suited to Schumann’s near-bipolar cycle of love lost and reunited.

Scarfe offered an unexpected treat after Die Winterreise when he played Webern’s Piano Variations, Op. 27, while Levine rested his voice for Schumann. Scarfe’s technique for Webern is flawless. Head moving in abbreviated motions, fingers and arms jumping across the keyboard in a deliberate manner, his execution was machinelike in its precision. The piece garnered the most vocal applause of the night, including a lengthy whistle from Premawardhana.

But what about that man who decided not to join in the fun? Premawardhana admits that the crowd at Red Poppy usually consists of those who are already a part of the Bay Area classical music scene. He adds, however, that Classical Revolution’s performances at the Revolution Café (every Sunday) are usually attended by whoever happens to be hanging out there at the time, a much more musically diverse group. The reception at the café is always enthusiastic, though concerns remain that even if these people become fans of Classical Revolution and its unstructured presentation, they may not patronize classical music elsewhere. Luckily, increases in foot traffic are not the organization’s sole contribution to musical life in the Bay Area.