Franz Welser-Möst has been in charge of the mighty Cleveland Orchestra since 2002, and he will continue to be there until 2027 at least. Although his interpretations of the classics have drawn fire from some, the orchestra has maintained its historically high level of performance on his watch — and that’s an undeniable achievement.

Yet given such a long tenure, plus the extensive recording history of this orchestra under previous music directors like Artur Rodzinski, Lorin Maazel, Christoph von Dohnányi, and especially George Szell — and even taking into consideration the shrinkage of the classical-record business in this century — there have been curiously few Welser-Möst/Cleveland recordings until recently.

There was a Beethoven Ninth of indifferent quality and a disc of Wagner excerpts for Deutsche Grammophon, a limited edition of Ravel/Debussy, a Dvořák Rusalka from Salzburg — and that was about it on CD. Mostly, the emphasis has been on videos. Welser-Möst is not the most telegenic of conductors — he seems to have a single blank, one-size-fits-all facial expression — but he got deeply-absorbing results in DVDs of the Bruckner Symphonies Nos. 4, 5, 7, 8, and 9 — with No. 8 using the fascinating, rarely-performed, original 1887 edition that has a radically different Scherzo. There was also a video cycle of the 10 basic Brahms symphonies, solo concertos, and orchestral pieces, plus the German Requiem.

The audio floodgates finally started to creak open in 2020, when The Cleveland Orchestra belatedly signed onto the trend of orchestras starting their own labels — just as the pandemic hit. So far, the programming has been refreshingly adventurous, starting with the inaugural set A New Century, where a relatively radical or new work is coupled with a relatively older one on each of the three discs. That pattern continued with an all-Austrian Schubert/Krenek coupling and now, on the orchestra's latest disc, an all-Russian pairing of Alfred Schnittke’s downcast Concerto for Piano and Strings and Prokofiev’s wild Symphony No. 2. This is a whole sight more interesting and useful than another Brahms cycle. 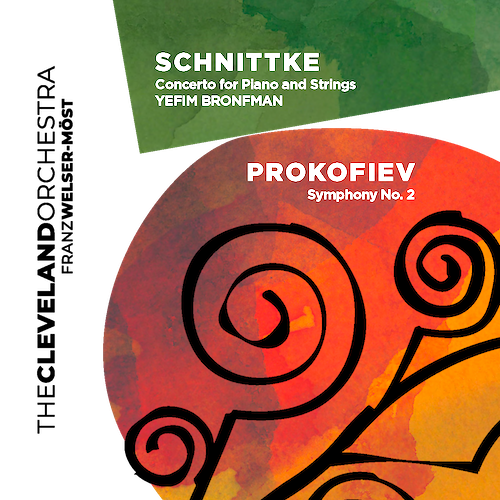 About 20 minutes in length, the single-movement Schnittke concerto comes from 1979 during his polystylistic period that Soviet authorities weren’t crazy about. The quiet opening for solo piano starts out just two notes at a time, followed by pensive exercises. But that’s a decoy, for the soloist soon turns on the heavy cluster chords against a highly dense string background. The texture sometimes seems to mirror a Hitchcock soundtrack as the strings shoot off streaks, tremolos, and scrapings. Things get really morbid and intense for both soloist and strings, and later on a subdued cadenza for piano builds almost imperceptibly into a pounding, rumbling commotion before subsiding. Everything fades eerily away in the end, leaving us with a question mark of a conclusion.

Yefim Bronfman — who plays Rachmaninoff's Concerto No. 3 with the LA Phil at Disney Hall this weekend (Feb. 3–6) — thrives on the bombs-away dissonances. He had never played the Schnittke concerto before, industriously using his pandemic down time to learn the piece. The album booklet says the piece “was barely on the orchestra’s radar” before the pandemic, and it turned out to be a convenient choice for a masked string section to record in Severance Hall as the COVID-19 ravaged Ohio in Oct. 2020.

Prokofiev’s Second is his bad-boy symphony, the most violent and hard-edged piece in the cycle of seven — and one of the least-known. The symphony is divided into just two movements, with the first movement relentlessly trying to keep up with the machine-music avant-garde of the 1920s and the long second movement being a less-frenzied set of variations on a theme. Think Beethoven’s Op. 111 piano sonata, and the structure becomes clear.

The almost equally volatile Symphony No. 3 turned up on the A New Century set in a sleek, beautifully-played performance of adequate power — and this performance of the Second, recorded in the orchestra’s sometime winter outpost, the Knight Concert Hall in Miami, in Jan. 2020, follows along those lines. Welser-Möst and his unanimous ensemble can turn on the power, but the articulation is noticeably rounded and softened, every detail polished and precise. Compare that with Erich Leinsdorf and the Boston Symphony (RCA/Sony), who tore into it with a teeming, yet equally well-played brutality in the 1960s.

The package is a handsome outlier as jackets go, a roughly eight-inch-square folder a little bigger than a 45 rpm EP, with a profusely illustrated booklet that toots the orchestra’s own horn and helpfully details the circumstances surrounding the recording sessions. Welser-Möst also contributed a pair of thoughtful essays. The disc is an SACD, but only plays in stereo, with the sound quality favoring the Cleveland hall over the Miami one. The label looks to be off to a pretty good start in documenting what Welser-Möst’s long-running regime in Cleveland has been up to.

The orchestra, conducted by Mälkki, played through pieces by Bartók, Stravinsky, and Sibelius with jolly virtuosity.

The Cleveland Orchestra is capitalizing on its vaunted reputation with new initiatives, a controversial music director, and greater outreach.

The pianist talks about the life of a musician on the road and his connection to Prokofiev.

Erik Satie Gets the Electronica Treatment