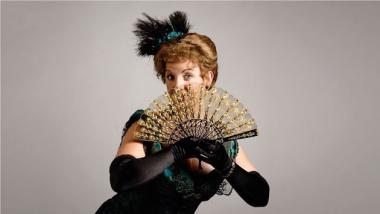 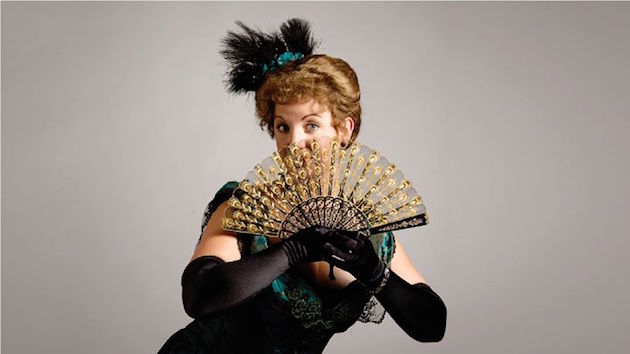 Opera may be a marriage of words and music, but in many cases that marriage isn’t made in heaven. Too often, operatic music soars out from the pit and the stage with confidence and expressive power, while the words form an acoustic muddle in a foreign language, barely to be deciphered, and that only by craning your neck at an ugly rectangle of static supertitles far above the stage.

Pippin’s lively English almost succeeded in the nearly impossible job of clarifying the plot. Die Fledermaus (The Bat) is a dizzying belle-epoque cocktail of assumed identities and disguises. It begins in the Vienna flat of the Eisensteins, who uncomfortably cohabit while pursuing other love interests, more or less openly. In the brilliant second act, the couple reappears in disguise at a posh ball given by a mysterious Gatsby-like Russian count. As the champagne flows, so do the complications, including the presence of the Eisenstein’s chambermaid pretending to be an actress. It all turns out to be a hoax concocted by Eisenstein’s best bud, Doctor Falke, to amuse the count and get back at Eisenstein for an old prank involving — yes! — a bat. It all ends in prison (don’t ask!), although no one actually goes to jail, this being a comedy.

In contrast to the expensive and overblown productions we see from large companies, Pocket Opera’s productions are opera on a diet. Designed to be portable and barebones, they use simple set pieces instead of cumbersome stage machinery. A sofa, chair, and drinks cart make a Viennese parlor. As a result, Pocket Opera can present operas in intimate settings such as the lovely 300-seat Florence Gould Auditorium at the Legion of Honor, where I saw the production, and where it was warmly received by a nearly full house.

The two principal soprano leads, palpably enjoying the English translation, were lively and clear-voiced in both song and spoken drama. As Adele the chambermaid, Patricia Westley sang her daunting high soprano roulades (especially her famous “Laughing Song” in Act II) with assurance and verve, combining musical and comedic talents. Lindsey Roush nicely captured the emotional struggles of Rosalinda, who is neglected by her husband and conflicted in her infidelities. Her great Czardas, though, needed more rhythmic precision to deliver its edgy, Hungarian sorrow.

Count Orlofsky, the Russian host of Act II’s ball, would have been — as the translation anachronistically suggested — a good client for the Viennese doctor Sigmund Freud. The count was played by mezzo-soprano Mary Rauh with Romantic melancholy punctuated by manic laughter. She delivered Orlofsky’s blend of boredom and sparkle in “Chacun à son goût” (To each his own), one of the show’s signature tunes. Martin Lewis made a debonair Eisenstein, though he lacked the warmth — vocally and theatrically — for us to fully engage with his character.

Pocket Opera’s orchestra is appropriately small — a 10-person band of piano, string quartet, woodwinds, and cornet. But its playing, while energetic, was uneven, with problems of tuning — especially in the abbreviated overture. Because there was no conductor (Pippin gave minimal cues from the piano), the music sometimes failed to hang together. Tempos were occasionally uncertain, and at times too slow to convey Strauss’s bubbly élan. Musical transitions lacked authority. Most critically, the singers could not see Pippin or the rest of the orchestra, which sits at the back of the stage, so ensemble numbers lacked the precision that is crucial to comic opera.

Pocket Opera does important work in bringing the words to the fore and providing an intimate experience of opera — and one considerably more affordable than large-scale opera-house productions. Now in its 40th season, Pocket Opera is a venerable institution, but it may be time for some more attention to bringing the entire musical experience up to par with the translations.

Pocket Opera Embarks on Season No. 40