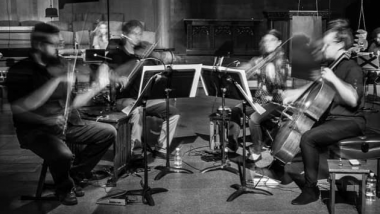 There was not a lick of vibrato heard all evening; it is frugal music, in more ways than one. There is some kinship to artists such as abstract expressionist Agnes Martin, in which the art is no more and no less what it presents itself to be. Hearing these three quartets all in one concert allowed me to settle into Cormier’s meditative examination of limited materials, and I have the suspicion that it is easier to appreciate them together than individually.

Video artist Joshua Westerman created abstract video live with each piece, altering parameters of texture and color in response to the minutely shifting music. Shimmering patterns warbled in and around each other, ranging from what looked like crows in the dark to macaws through a kaleidoscope. Sometimes I was more engrossed in the mesmerizing patterns than in the music, but on the whole, they complemented each other.

The rate of change in the video was quite a bit faster than in the music, and the contrast in that rhythm freshened both works of art. Each of these quartets shook off the need for recognizable form. They were long enough, unchanging enough, to force the listener to be lost. I found that aspect both tiring, and somewhat relieving — it actually freed me up to focus on the exact sound that the quartet was making, to not worry about what I could or could not remember of the music that came before. This is investigation driven music, not narrative driven music.

And a listener has to be in the mindset to investigate in order to enjoy this kind of experience. Each piece was written in blocks of semi-indeterminate musical material. For instance, in Nuages flottants (Floating Clouds), the score consists of long stacked chords, with a new chord each measure. The instructions are for each member to play their note of the chord at whatever point in the measure they want, at any length. The result was a gorgeous, thin passage of chords, like wisps of clouds, or their shadows moving across the ground. The experience was like watching clouds, but in a thoroughly un-scenic place. Boring, but real, and natural in its slight variation in flavor.

If Nuages flottants was the most direct of the three quartets, the most inscrutable was Le Grondement de la montagne (The Sound of the Mountain). The players would only play long static tones or pizzicato. All resonance was stifled, falling dead with each ending note. It reminded me of the way that sound dies above a dense pine forest floor. Ultimately, it was too easy to shift my attention to the video projected on the wall, which outstripped the music by a few degrees of interesting.

The final quartet, Derniers chrysanthèmes (the English translation of the original Japanese title is Late Chrysanthemums), combined the still chords of Nuages flottants and stomach-turning glissandi. The overall emotion was one of calm-uneasy, which has some relation to Naruse’s affinity for the “family drama,” in which everything is quietly quotidian but falling apart under the surface. Westerman’s choice of video for this work was an endlessly repeating stop-animation of shapes, in which each repetition left a ghost of itself, like the impression a bright light leaves in your eyes. Though this piece was too long, without warning I would feel deep ripples of emotion on hearing certain shifts in the music coincide with the endlessly looping animation. Waves of dread or serenity wandered from my head to my feet.

Is it actually a good thing to overwhelm your audience?

The pianist pushes the boundaries of performance norms in a concert dedicated to his own death.