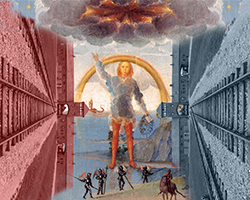 “Vilna Poems / Akoka: The End of Time / In Commemoration of the 70th Anniversary of the Warsaw Ghetto Uprising” read the title sheet of the Jewish Music Festival’s concert at Berkeley Repertory Theatre on Saturday. I didn’t get the connection. Vilnius is the capital of Lithuania. Quatuor pour la Fin du temps is a famous quartet by the French Catholic mystic Olivier Messiaen. So? And what’s this “Akoka” business? Well, a group of outstanding musicians shortly put it all together for me that night. My mind got some exercise — and my soul got moved.

Vilna had actually been a part of Poland since the aftermath of World War I, despite Lithuania’s declaring the city to be its capital. Its Jewish population enjoyed a rich cultural life there, even after Nazis and their collaborators herded it into two ghettos and began exterminating it during World War II. The highly regarded Yiddish poet Avrom Sutzkever lived there, and fortunately escaped. David Garner, a long-time professor of composition at the San Francisco Conservatory of Music, recently completed settings of six of Sutzkever’s poems. Their premiere opened the concert.

Garner’s musical language is simple yet subtle, tonal, and beautiful. The subjects of the poetry moved from love, to imprisonment, to digging pits for executions, to PTSD … and ended with rejuvenation. Soprano Lisa Delan’s lovely voice added its grace to the accompaniment of David Krakauer’s clarinet, Matt Haimovitz’s cello, and Kristin Pankonin’s piano. Chana Bloch’s excellent translations were included with the program notes, but could barely be seen in the overly darkened hall during the performance. In any case, the 23-minute work proved to be a wonderful addition to the repertoire, and I hope it receives a wide currency.

Following intermission came a well-fused hybrid, in more ways than one. Henri Akoka was a French-Algerian Jewish clarinetist who was captured by the Germans in 1940. While awaiting transfer, he tried out a piece for his solo instrument that Messiaen, a fellow prisoner, had written. Later, it became the third movement to the Quartet for the End of Time, which Messiaen wrote in Stalag VIII-A on the Polish border and performed with Akoka, along with two string players.

My mind got some exercise — and my soul got moved.

Messiaen’s title was inspired by the Seventh Angel in the 10th book of Revelation who swears that “there shall be time no longer.” You could imagine that many during the horrors of the war felt the end times were upon them — as indeed they were for several millions. To bring home that context, two additional pieces bookended the Messiaen without pauses: a “structured improvisation” by Krakauer at the beginning, and an accompanied electronic mix by Canadian hip-hop artist Socalled at the end. The avowed purpose of the three-piece meld was “to bring out the human aspect” of Messiaen’s piece by seeing “through the ‘eyes’ of one individual caught up in terrifying events beyond his control.” That person was presumably Akoka, who narrowly escaped being sent to a death camp by using a pass forged for Messiaen and his musicians, and then fleeing his transport after officials said he looked “too Jewish.” The bookending of the Messiaen was supposed to be done in a way “that ‘lifts’ it out of the polite confines of a normal chamber music performance.” In effect, the superbly done electronic amplification of the instruments, along with the stellar renditions by its performers, did as much as the bookends to make the piece an extraordinary experience.

Garner’s musical language is simple yet subtle, tonal, and beautiful.

The bookends themselves, after all, lasted only 5 and 7 minutes, respectively. In between came 53 minutes of (slightly) amplified Messiaen, which for me represented an eight-movement dreamscape of unreality generated to cope with the disastrous situation endured by camp prisoners and those confined to ghettos. While pianist Kathleen Tagg did much to reflect the composer’s religious ecstasy in the middle with saintly chords, it was the bookends that were the reality: shrieks and wails on Krakauer’s clarinet, glissando screams on Haimovitz’s cello, and scary harmonics on Kay Stern’s violin. The mix with Socalled’s samples of trains, cantors, bells, clocks, news announcements, and even raps at the end culminated in an incredibly long-held, high trill by Krakauer that brought the audience to its feet.

I cannot commend Krakauer and Company more highly on their creative and not overdone way of shedding fresh light on a modern masterpiece. Inevitably, tasteless imitators will too closely abut absurdities against classics — but at least now we have a gold standard for comparison.