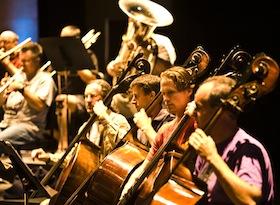 Coping with a Mixed Bill at Cabrillo

As is often the case at the Cabrillo Music Festival, the doors of the Santa Cruz Civic Auditorium opened on Saturday at about the time the concert was scheduled to start, so everything ran rather late. It was another 20 minutes before Music Director Marin Alsop raised her baton. The music, too, seemed to be running a little late. It all sounded like something that had been done before, and sometimes done better before.

The first composer up was Elena Kats-Chernin, with the American premiere of her Re-Collecting ASTORoids. This awkward title intends allusion to the work’s creation as a tribute to the late Argentine tango composer Astor Piazzolla. (It has nothing to do with celestial bodies, apparently.) Listening to Kats-Chernin’s music with Piazzolla in mind was like reading one of those novels with an “In the tradition of ...” blurb on the back cover: It only serves as a reminder of how much better the original was.

Kats-Chernin uses tango rhythms and some of Piazzolla’s characteristic harmonic moves in a half-hearted fashion, dropping the rhythm halfway through because, as she explained in introducing the piece, she got tired of it. That’s not much of a tribute to Piazzolla, who was crafty in avoiding boredom. Nor does the work obviously partake of Kats-Chernin’s own distinctive background. Born in Soviet Uzbekistan, she’s been living in Australia since the age of 18. Her writing is consonant, not too lush, tending to back string-based melodies with light submerged wind or brass doubling. This doesn’t sound like Piazzolla; it sounds like 1930s movie music, in which doubling of this kind was common to make string lines more audible on primitive theater sound systems. Cliches of harp and triangle punctuation abound. While the music is pleasant to listen to, it has little harmonic depth or melodic development. For light classics, I’d rather have Piazzolla.

As for the Piano Concerto by Behzad Ranjbaran, it begins by proclaiming itself to be as much unlike Kats-Chernin as possible. Stark brass and heavy drums boom out. If this were movie music, it would be for some pre-Christian imperial costume epic. That wouldn’t be a bad guess, as Ranjbaran intends to evoke ancient ceremonials of his native land, Iran. (Like Kats-Chernin, he’s been living elsewhere — the U.S., in his case — since his undergraduate years.) Periodically, the thunderous orchestra pauses, allowing pianist Jean-Yves Thibaudet (for whom the work was written) to introduce some fairly thunderous Rachmaninov-like chords of his own without competition.

The concerto’s succeeding movements are more peaceful, with piano lines of light grace reminiscent of Saint-Saëns and of a playfulness strongly resembling Prokofiev. Here the solos are given some slight accompaniment, often by harp or solo violin — a lot of work here for acting Concertmaster Justin Bruns. Ranjbaran shows wisdom and economy of means in conserving his pianist’s strength and not forcing him to flail away inaudibly against the orchestra. He permits Thibaudet both to show off his power without exhaustion and to display a variety of tone colors in passages of quieter character. At 33 minutes, the concerto is no shorter than necessary. It has the weight, and not just the heaviness, that a work of this size needs. What it could use more of is thematic variety (it’s built largely on motto themes) and concision.

The most interesting work on the program was a symphonic poem by Shuko Mizuno, also a first U.S. performance, though it was written 23 years ago. Its Japanese title, Natsu, translates as Summer, a name adopted as the title for the entire evening’s program. The piece is a portrait of the alarmingly varied summer weather typical of a moist continental climate like central Japan’s. Rich, pungent harmonies move slowly through the orchestra, with wind and percussion skillfully overlaid on string-based writing and with moods changing almost imperceptibly. Twice, huge storms break out (once would have been enough) in the form of monstrously uncoordinated chaos that sounds aleatoric, though it appears actually to be fully scored, each time vanishing suddenly to return the music to the still soundscape with which it began.

I suppose it was these episodes and the contrast with their misty surroundings that led Alsop to call Mizuno “the Japanese Christopher Rouse.” Mizuno mentions Messiaen in his program note as an influence; I also hear other atmospheric composers, from Debussy to Ligeti. Mizuno has the skill to blend varied instruments and moods, as well as the sense of balance to craft a modestly interesting work.

Shuko Mizuno has the skill to blend varied instruments and moods, as well as the sense of balance to craft a modestly interesting work.

The program was rounded out with two five-minute “anniversary nightcaps,” newly commissioned in honor of Alsop’s 20 years with the festival. Prepositions and the Names of Fish (an odd title with, we’re told, no program significance), by Mark Adamo, is a soft, percussion-based, rhythmic scherzo. Cabrillo Lullaby, by John Corigliano, is a nocturne in the good old Coplandesque Americana style, apparently written entirely tongue-in-cheek.

The festival orchestra coped valiantly with all this new music. The strings tended toward the shrill, and occasional ensemble problems came up. Otherwise the band was in fine shape, and the winds, brass, and percussion sounded full and confident throughout the evening. Overall, it was a good effort on fair to middling music.