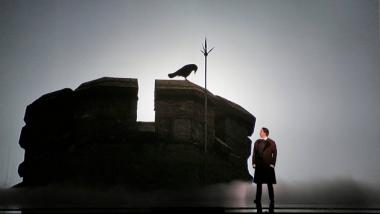 Editor's note: Gordon Getty is a funder of SFCV.

I wonder if anyone who attended the San Francisco Opera on Tuesday was reminded of two priceless sentences from Tim Robbins’ novel Another Roadside Attraction: “The day was rumpled and dreary. It looked like Edgar Allan Poe’s pajamas.” Two one-act versions of Poe’s “The Fall of the House of Usher” were creeping the stage with their rumpled and dreary elements, yet there was nevertheless much in them to admire. Furthermore, comparisons between the two prove instructive.

Most admirable in local composer and philanthropist Gordon Getty’s Usher House was the video production design by the Viennese David Haneke. Huge, mobile, video panels of his invention (the “Triptichon” system) displayed high-resolution images of movements through Usher House interiors and exteriors. These were populated by a raven (natch!), living portraits whose subjects got up and walked out of their frames, and a bevy of ghostly ancestors right out of the opening number in The Addams Family musical (except they were better dressed).

Also of note was Getty’s own libretto, which added some potentially dramatic elements to the original story. In brief, it’s about an unnamed, old friend visiting an agoraphobic Mr. Usher, who is going mad in his decaying mansion while pursuing abstruse researches. Meanwhile, (1) Usher’s cataleptic twin sister is buried alive and (2) escapes her tomb, magically causing (3) the estate to collapse into its surrounding lake. Rather than capitalize on the impressive stagecraft that could have accompanied prolonged musical settings of these three events, the composers of both operas concentrated their skills on Usher’s psychological morass, leading up to denouements that were all too brief.

Getty, with some success, turned the two Ushers into noble heroes allied with the friend—characterized by the composer as Poe himself—against dark forces of the ancestors and the building stones (H.P. Lovecraft fans: think Cthulhu). The family physician, barely mentioned by Poe, has morphed into “Dr. Primus,” a sinister agent of the ancients (well portrayed by bass Anthony Reed).

Getty says he wrote his libretto “20-30 years ago as a short play or opera,” and its ambivalent purpose shows in its interesting, but text-laden monologues. I wish I could say the music, like Wagner’s in Wotan’s long speeches, makes the listening worthwhile. Unfortunately, the transparently scored parlando hangs like tinsel on the text. Only a poem sung by the character Poe contains memorable melodic material.

A wise decision on Getty’s part to add a dancer as Usher’s sister for visual interest (the lithe Jamielyn Duggan) became a missed opportunity, dance-music-wise. A less wise, but diverting, visual interest about three quarters of the way through, when the novelty of the videos had worn off, was Dr. Primus nonchalantly putting a hat of metal bands on Poe’s head and giving him shock therapy while revealing the arcanities of his cult.

Debussy’s La Chute de la Maison Usher was incomplete at his death. Robert Orledge’s additions double the amount of music, but stay consistent with Debussy’s style. The monologues are just as long as Getty’s and the plot less interesting (reflections on madness predominate), but the music has more substance and dramatic power. It was hardly first-class Debussy, but much more worth listening to, relative to its monotonously morose libretto, refreshingly relieved every now and then by shafts of major-key light inserted by Orledge. This might support the old-fashioned notion that music is the most important of the elements of opera.

Baritone Brian Mulligan, as Usher in both operas, sang magnificently and did a fine job of conveying a wide range of emotions. Poe was sung by a weak-voiced Jason Bridges. Edward Nelson did a fine job as L’Ami, the Poe counterpart in the Debussy. Joel Sorensen was particularly effective as a mincing yet threatening physician, Le Médecin. Lawrence Foster conducted the well-rehearsed orchestra.

I hope to experience more contemporary operas here in the future, for, as Benjamin De Casseres wrote, “Hope is the gay, skylarking pajamas we wear over yesterday’s bruises.”