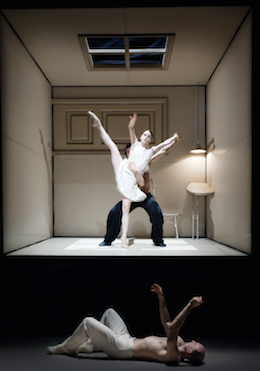 Dance, As Memory Flutters By

Having missed the recent visits of the Netherlands Dans Theater, it was an eye-opener to see the company at Zellerbach Hall, presented by Cal Performances. This was a brief (with shows only Wednesday and Thursday) visit, ecstatically received on opening night with a prolonged ovation.

In olden days — and admittedly, we’re talking 10-plus years ago — Nederlands Dans Theater was synonymous with Jiri Kylian, the Czech choreographer who ran the company, worked with its amazing dancers, and kept it full of his characteristically lyrical and often breakaway-brilliant masterworks.

Well, Kylian’s been gone since 2009 (he’s still choreographing, just not at NDT) and there’s a new sheriff in town (The Hague, that is), Paul Lightfoot (Great Britain), who took over in 2011. His wife, Sol Leon (Spain), is the company’s co-resident choreographer. Lightfoot danced and then choreographed for 18 years with Kylian at NDT, and Leon came aboard in 2002. Their style and outlook feels more eclectic than Kylian’s gorgeous neoclassicism, with a certain frisson of winking world-weariness and ironic charm.

The dancers (30 in the main company, from 15 countries) are superb artists, as individuals and as a unit. The two ballets, Sehnsucht (2009) and Schetterling (2010) both by Lightfoot and Leon, showed persuasively that the dancers can handle any style, mood or mode, even in pursuit of the same theme — memory and regret — for each.

Sehnsucht, German for yearning (or longing, or nostalgia) and set to excerpts from Beethoven’s piano concertos 3 and 4 and his Fifth Symphony, describes at least two worlds. In one, Silas Henriksen, blond, rangy, barechested with white pants, crouches on the darkened stage, rising into stunning one-footed poses and turns. Sinuously reaching, as if hoping to make contact, he eventually calls attention to a couple inside a cubical room that’s within a cylinder; it’s a room that turns. Shades of Fred Astaire in Royal Wedding.

There’s only one cure for all this aloneness, and that’s a massive, bare-chested, choral dance for 12 — including four women — to Beethoven’s Fifth.

The dancers inside, Medhi Walerski, in black and Parvaneh Scharafali, in a white dress, tend to be as far away from each other as possible in a 10-foot space, and whether they’re on the ceiling (she clinging to a desk chair that was on the floor, until things turned — or the side wall, or the floor — their mutual estrangement, even during physically intimate holds (she’s wearing flesh-like underpants) is palpable. It’s as if the room is a vacuum with all the air sucked out of it.

Movements accelerate, lending a frantic breathless quality. Scharafali tries to leave by a window to engage with Henriksen, gets halfway out and cannot escape, cannot succeed. She goes all the way back in. He tries, too; he takes the door (reaching up the wall to leave), but is even more abashed upon his return, a funny moment in a rather somber if gimmicky vignette that leaves them completely alone — together. There’s only one cure for all this aloneness, and that’s a massive, bare-chested, choral dance for 12 — including four women — to Beethoven’s Fifth. Everyone’s in black pants, nobody’s zaftig; the look is more unisex than sexy. On the other hand, toplessness has a different connotation here than on NDT’s home turf. If the choreographers were simply striving for basic unity, everyone could have worn identical shirts with the pants.

Anyway, after all that cubed claustrophobia, it’s wonderfully expansive, with turns, leaps, and sweeping deployments. Virtuosic and somewhat bombastic, it feels like an attempt to break free of the past that has held these three people in thrall. And it works. For a little while.

Virtuosic and somewhat bombastic, it feels like an attempt to break free of the past that has held these three people in thrall. And it works.

As the piece ends and the house lights go on for intermission, Henricksen is alone onstage. The curtain is halfway down, and the stagehands come and start stripping tape from the floor. So, now: the past is an artificial construct? We can let it go? Hard to say. Slowly, Henricksen exits stage right, pausing to wave and gesture at persons real or imagined, or remembered. This will tie with the next piece; returning from intermission, the audience is greeted by Ema Yuasa, a small woman in white with a blood-red coat and rice powder makeup.

Her motions seem jerky and doll-like, and her expressions — the smiles, the grimaces that undercut them — owe much to Butoh, the Japanese modern dance form that emerged after World War II. So begins Schmetterling (Butterfly), a salute to Medhi Walerski’s mother, whom he attended during her final illness. Waleski appears in black pants; Henriksen has changed to gray ones.

Yuasa will reappear as an old, stooped-over woman with silver hair and a black coat. We are being cast backward and forward in memory, and at the same time experiencing love between mother and son, expressed in fascinating partnering. Yuasa is a bewitchingly supple shape-shifter, transforming her character through dance and drama from youth to age, affection to domination, laughter to pathos.

The music alternates between Max Richter’s Memoryhouse and a series of strange, atonal rock tunes with wonderful lyrics, when you can hear them, by The Magnetic Fields. A few titles: “How [bleep]ing Romantic,” “Boa Constrictor,” “The Cactus Where Your Heart Should Be” — and of course this, too, is all about love. The corps of four women and seven men, this time all wearing short black coats over navy A-line dresses (tit-for-tat?), becomes a floor show.

These dances will take a bit too long. The company looks fine, the steps are fun to watch, but there is a sameness to the music as the monotones drone on and on, and the wry expressions, the burlesque gestures, some cute and some not so much, continue. But at last, the corps unites in a kitschy Hawaiian floor show, gesturing expansively while sinking out of sight on the pit elevator with one last strum of a ukulele.

It falls to a lone dancer to administer the coup de grace, reaching the lovely cyclorama, with its photo of a black and white landscape, and yanking that curtain away. All that’s left is a blank, black panel, and stage lights. So much for memory.