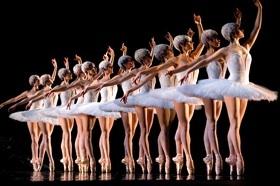 Dancers Lead Swan Lake Out of the Woods

Rachel Howard on January 28, 2010
No one enjoys breaking the news that San Francisco Ballet Artistic Director Helgi Tomasson’s production of Swan Lake, unveiled last year, has serious flaws. After all, even a distantly faithful combination of the Tchaikovsky score and what has been handed down of the 1895 Ivanov/Petipa choreography is practically guaranteed to cast a spell on a general audience — who wants to kill that buzz? Fortunately, a singular ballerina in the dual role of Odette and Odile can make even seasoned ballet fans forget this staging’s shortcomings and walk out in a swoon. And fortunately, such a transcendent interpretation was delivered Wednesday night by Sarah Van Patten.

Van Patten gave one performance in the role last season and is among five casts this year (she dances again Saturday); I saw all six casts in 2009, and Wednesday’s show confirmed Van Patten as outstanding. Her Swan Queen Odette is tragic in a self-contained way — rather than saying to Prince Siegfried, “I’m a needy victim, help me,” her regretful and womanly strength telegraphs, “Can’t you see I’m doomed? It’s impossible between us.” That impossibility makes you understand why Siegfried would then desire her all the more ardently. And because Van Patten’s searing Black Swan, Odile, presents a different kind of romantic impossibility, taunting and teasing, you then understand Siegfried’s universal dilemma: How do you tell the difference between love and seduction?

On Wednesday, Van Patten was in great form, having discovered new delicacy in the birdlike arm movements, and she punched out 27 of those third-act fouette turns. But hers is not an interpretation about technique. This is a very American, very contemporary approach to Odette/Odile. No poses are struck or held, in the Russian way (though she did catch some wonderful, long arabesque balances in the Black Swan pas de deux), and nothing looks self-consciously classical. Some would say style is lost. I would say emotional potency is gained.

Unfortunately, Van Patten’s Siegfried, guest artist Vadim Solomakha, was prohibited from making much dramatic coherency of his role by the missteps of Tomasson’s production. Though the traditional mime passages are generally maintained, little else makes storytelling sense here. Tomasson has cut-and-pasted much of his 1988 production choreography into a new circa-Jane Austen setting. The final duet for a penitent Siegfried and forgiving Odette is new, and an improvement. But the Act 1 set makes a muddle of narrative ideas.

The original concept of British designer Jonathan Fensom’s huge palace wall, as I understand it, was to metaphorically suggest Siegfried’s psychological entrapment. But the set already places him outside the wall. And his Queen Mother is rather mild and not very oppressive. We don’t get the sense that Siegfried would, in fact, like to find a true love but is being forced to marry within royalty. All that the game Solomakha managed to suggest was that Siegfried is a flirty boy who’d rather have fun. His mother’s gift of a crossbow doesn’t make sense in Regency-era England — the crossbow, as a colleague pointed out to me, being a medieval weapon. (Most Swan Lakes are set in medieval or Gothic times.) At least Solomakha tried to give his Siegfried a character arc, by childishly adoring the crossbow. His acting, alas, was in better form than his dancing — his variations were not as strong as I remember from his past seasons as a principal with S.F. Ballet.

You could continue to tick off smaller problems, from the peculiar entrances and exits in Tomasson’s adaptation of the famous Ivanov lakeside Act 2, to the high-waisted long dresses that obscure the women’s classical lines and hide their legs in the Act 1 pas de trois. But Van Patten is far from the only dancer who transcends this production. The corps of 30 swans was beautifully drilled Wednesday, with Lily Rogers and Jennifer Stahl ravishing as the tall Swan Maidens. The first act pas de trois fielded an exceptional trio: Frances Chung with her confident generosity; Nutnaree Pipit-Suksun with her mature elegance and high, sharply arched instep; and Hansuke Yamamoto with his clean, controlled jumps. Clara Blanco and Martyn Garside were terrifically crisp in the Neapolitan ballroom divertissement, and Anthony Spaulding reprised his convincingly wicked rendition of Von Rothbart in a newly improved costume. Martin West conducted, and the orchestra delivered the music well except for the lakeside pas de deux, in which the violin solo had an unnervingly thin tone.