Daniel Hope and the New Century Chamber Orchestra he leads consistently play music fiercely, in both meanings of the adverb: in a powerful manner, with heartfelt intensity. Beethoven, whose 250th birthday is now being celebrated around the world, is the very (musical) definition of ferocious energy. All that came together Saturday with sustained impact. 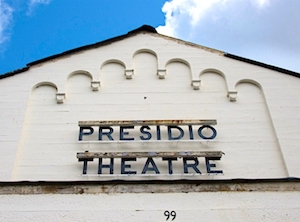 The event took place in the sensational concert hall of the newly rebuilt, acoustically brilliant Presidio Theatre, which, in donor Margaret Haas’s words, “feels like the theater is hugging you with its curves.”

NCCO offered two youthful Beethoven works — and an encore from the same period — in heavily (and properly) rhythmic performances, radiating palpable enthusiasm. Beethoven’s  First Symphony ( written in 1800, when he was 30) and Triple Concerto (1803-04) are both in C major, the key known prominently for simplicity and straightforwardness — completely in agreement with the nature of NCCO.

’s presence, playing, and leadership vouchsafed the authenticity of the performance; one of the world’s most prolific performance and recording artists, the music director of numerous ensembles is now also president of Beethoven-Haus Bonn, the organization dedicated to the composer, and located in Beethoven’s birthplace.

The night before this concert, Hope joined two renowned artists for an evening of chamber music by Beethoven in the theater: pianist Simone Dinnerstein, NCCO’s artist-in-residence this season, and cellist Lynn Harrell. They stayed around long enough to shine in the Triple Concerto on Saturday.

Between the violin’s bright notes and the cello arraying between violin and double-bass ranges, Dinnerstein’s clear, assured piano helped to focus the fast-racing motifs of the Allegro and Rondo movements, returning again and again with increasing impact. In the short slow movement — Largo — the three soloists played more beautifully than ever, quite without the cello’s occasional slurred low notes elsewhere in the piece.

For an encore, they played another fast and furious piece, the Finale of the  Piano Trio in E-flat Major (1795), Hope explaining the story of “Op. 1, No. 1,” which was not Beethoven’s first published work, but his choice for his first major publication (sold with two other large-scale trios), with which he formally introduced himself to Vienna, where he had arrived in 1792.

In the First Symphony, woodwinds have a prominent role, and the orchestra’s guests played superbly, their sound blending with the hardworking strings. They all stayed up marvelously with the demanding tempi, which go from fast to faster to — surprise! — faster yet in the third movement, which Beethoven called a minuet, but is in fact a forerunner of his great symphonic scherzos.

The concluding Allegro molto e vivace is so relentless and demanding that Hope — usually generous with encores — led his musicians off stage after a couple of bows to provide relief. Remember that except for the cellos, New Century musicians perform standing, and performance appearances notwithstanding, they are only human.

Every detail of the performances elicited the underlying spirit of these Baroque masterworks.