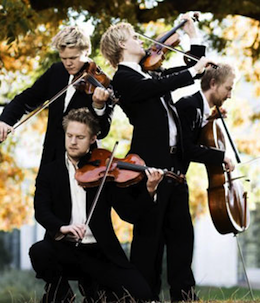 The Danish String Quartet, an ensemble of four young blond men with three blond beards, concluded an American tour with a Cal Performances concert at Hertz Hall on Sunday. The group had made a tremendous impression at [email protected] last summer, and now it was Berkeley’s chance to hear them.

The repertoire on the program was dark and foreboding. It featured two huge, deep-minded, serious quartets in A Minor: Beethoven’s Opus 132 — the Danes’ signature piece, which they had performed at Menlo — and Mendelssohn’s Opus 13, written only two years later and in direct response to Beethoven’s. The opener was a modern work, the String Quartet No. 1, “Ten Preludes,” by the contemporary Danish composer Hans Abrahamsen.

Abrahamsen’s 10 movements came across as tiny experiments in note patterns and harmonic coloring. They ranged from harsh and buzzing in the European modernist style of the day (this was written in 1973) through chromatic lyricism, to gentle chords, with a lot of driving pulses, a touch of folk song, experiments in minimalist drones and phase shifting (in 1973, minimalism was still real minimalism), and a big surprise in the form of a finale of pure 18th-century pastiche.

The toughness of the earlier movements still echoed in the finale, though, and this turned out to provide an ideal sound context in which to hear the Mendelssohn. The outer movements of this received a driving, bright-toned, wiry performance under the lead of the edgy first violin of Frederik Øland (the one nonbearded player). The buzzing, the dissonance, the driving pulses (with particularly good churning rhythms in the slow movement from the group’s sole Norwegian, cellist Fredrik Schøyen Sjölin), a brutality in the finale’s opening, and a secretive harshness are all there in Mendelssohn’s score; it just needed the Danes (and the Norseman) to bring it all out.

What most impressed in this performance were the rich, distinctly vibrant chords. The four voices, each individual, when added together shot an animated resonance through the music.

All along, though, there was another side to Opus 13. This showed in the main section of the charming intermezzo, which was played slowly and sedately, like a courtly medieval dance. The trio had the light buzz of the outer movements, and by contrast was so fast it wasn’t possible to slow down enough at the return to the main section to make the transition convincing.

Most of all, throughout the work — even in the fast skittering of the finale, and most strikingly in the impassive presentation of the first movement’s opening theme — what most impressed in this performance were the rich, distinctly vibrant chords. The four voices, each individual, when added together shot an animated resonance through the music.

If there’s anything the performance was memorable for, it was the harmonies of those chords. A switch in first violinists helped make the Beethoven even more satisfactory in this respect. Rune Tonsgaard Sørensen’s sweet, dark tone and smooth note-running, especially in the first movement, fit the moderate, well-chosen pacing, full of beautiful curvatures of melody and brightly accented drive. Sørensen’s duets with Øland’s more cut-and-dried playing made a lovely mixture of violin styles, like a sweet-and-sour flavoring.

Sørensen’s duets with Øland’s more cut-and-dried playing made a lovely mixture of violin styles, like a sweet-and-sour flavoring.

Mix that with the low moaning sound of Asbjørn Nørgaard’s viola and the strict concentration of Sjölin’s woody cello, and the combination came off something like an old portative organ, sending vibrations out to shudder in the air. The grace and gentility of Beethoven’s second movement scherzo and fourth movement march benefited from this sound. The enormous slow hymn of thanksgiving between them reached a spiritual state almost of religious intensity. The Danes took the Molto adagio quite fast, which focused attention to the shifting chords over any tragic utterance; the Andante interludes didn’t feel faster (though they were) so much as insertions of shafts of brightly sputtering sunlight.

The rondo finale was the rawest and most energetic movement. Bursting energy in the ritornello, contrasting with weird, dark episodes, kept the pacing clean and avoided repeating a rambling quality that had hit Mendelssohn’s finale.

Perhaps knowing that their chords are their most glowing recommendation, the Danes chose for an encore a plain, full-chordal harmonization of a 17th-century Swedish melody that is also well-known in Denmark, “Nu Blomstertideu Kommer” (The spring is coming). It, too, felt like a hymn. The dark program had been filled with holy light.