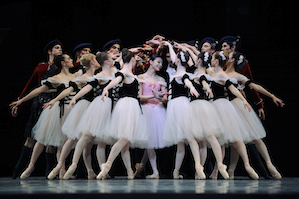 Three of the best dance makers in the business were on the bill Friday night at San Francisco Ballet’s program 4 at the War Memorial Opera House, but, sadly, only two of them fulfilled expectations.

George Balanchine’s Scotch Symphony and Christopher Wheeldon’s In the Golden Hour were terrific, while the much-anticipated world premiere, Alexei Ratmansky’s From Foreign Lands, never quite found its footing — this, notwithstanding its cast’s lively renditions of the European survey, all set to the music of Moritz Moszkowski: Russian, Italian, German, Spanish, Polish, and Hungarian national dance styles.

With his bubbly sense of humor and acute powers of observation, Ratmansky’s ballets are known for the way he delineates dancers’ individuality as well as their interplay. But here the underlying wit never bubbled to the surface.

The Italian dance, with Pascal Molat, Dores Andre, Dana Genshaft, and Sarah Van Patten, came closest to succeeding, with its sly quotes from Balanchine’s Tarantella and its faked pauses as the quartet pondered which juicy cliche to execute next. All that, plus Molat’s exciting leaps, the ballerinas’ precision at top speed, the flirtiness. It passed too soon. The German dance, an over-the-top, hyperromantic exercise for Sofiane Sylve — looking gorgeous as she was lifted hither and thither by Luke Ingham, Vito Mazzeo, and Garen Scribner — seemed vague and directionless. The Spanish, with its rivalrous duets, fell flat despite Molat’s amazing string of grand pirouettes and Gennadi Nedvigin and Maria Kochetkova’s sly Don Quixote pas de deux allusions. By the time the Polish mazurka rolled around, followed by the Hungarian finale, even Vanessa Zahorian couldn’t save it. Ballet is easy. Comedy is hard.

Another Russian’s visit to a foreign land resulted in a (neo)classic. Balanchine choreographed Scotch Symphony in 1952 after visiting the Edinburgh Festival. He was impressed by the Scottish regiments in full, kilted regalia and set his ballet to Mendelssohn. Biographer Bernard Taper said Balanchine created the role of a sylph for Maria Tallchief, known for her pyrotechnics, because he wanted her to explore her lyricism. S.F. Ballet principal dancer Yuan Yuan Tan, proving yet again that she can do anything, danced the role Friday.

Yuan Yuan Tan, proving yet again that she can do anything, … was a miracle of steady arabesques, impeccable port de bras, enduring strength, and ethereal elusiveness.

She was a miracle of steady arabesques, impeccable port de bras, enduring strength, and ethereal elusiveness. What is a sylph doing in Scotland?, you might ask; doesn’t she get cold? If you ask, you’ve never seen August Bournonville’s La Sylphide, wherein a Scotsman named James falls for a sylph named Effie, and wonderful tragedy ensues. In Balanchine’s version, even though an entire regiment keeps coming between them, it never gets that tragic (nor, come to think of it, that transcendent), because there’s a counterbalancing ballerina bounding onstage periodically to cheer us up. As danced by Courtney Elizabeth, she has brio to burn; she’s festively garbed in a kilt and red knee socks (to match her pointe shoes), and her optimism is as limitless as her elevation. Accentuated by the unity of the corps de lads and lassies, this was a beguiling performance.

Wheeldon’s ballet is a festival of variations … Its subtleties are infinite, its joys multitudinous.

The evening’s surprise smash was Christopher Wheeldon’s Within the Golden Hour, which premiered in 2008. At its age, you don’t really expect that the audience will practically charge the stage at the final curtain. But that’s what happened. The piece is set to a wonderful web of contrasting music by the contemporary composer Ezio Bosso and by Antonio Vivaldi, creating a dancey (as in social-dancey) neoclassicism. The first section felt slow, bordering on inauspicious, but that was because we hadn’t yet been properly introduced. After a while, Wheeldon acquainted us with his ensembles; male pyrotechnicians, crouching and leaping, partnering and lifting each other; men and women working their way into sociable and then stunning mambos, facing each other, then facing in the same direction, inviting us to share their joy of relating to each other as they stepped or often slid, in wide, sideways stances.

Wheeldon’s ballet is, in all, a festival of variations — some more abstract than others, but definitely of the same family. Its subtleties are infinite, its joys multitudinous. The fine dancers included Joan Boada, Damian Smith, Clara Blanco, Zahorian, Van Patten, Ingham, Kochetkova, and Jennifer Stahl. Music Director Martin West conducted the orchestra through all three ballets. It sounded terrific.