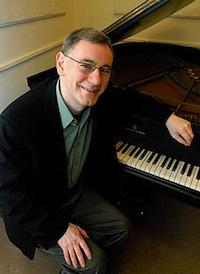 Davitt Moroney: Brilliantly Back to Bach

Seldom programmed by virtuosos, the French Suites by J.S. Bach are usually thought of as teaching pieces to be assigned to intermediate pianists. I think the last time I heard one played in public was as an encore after an all-Beethoven recital. An integral concert performance of all six is a rare event, and the opportunity to hear them played on three different harpsichords, each in a different tuning, is an impossibility. Except in Berkeley. At his masterful Cal Performances recital Sunday afternoon, Davitt Moroney made it seem the only way to fully appreciate these works in all their richness and diversity.

Moroney, who teaches at UC Berkeley, is the rare scholar/performer who is as comfortable when speaking to an audience as he is when playing for them. Indeed, at one point he asked his Hertz Hall audience if we had read his fascinating, formidable program notes. (I was about halfway through them.) But this was no dry lecture. Traversing the stage, Professor Moroney surveyed the three instruments placed side by side, as if standing before a selection of vintage wines and offering them to the audience for their approval. As he laid his score on one of them — a copy of a harpsichord built by a maker whose son had studied with Bach himself — I sat back and thought, Aha, this has got to be the real thing.

It may have been, yet I was challenged from the first phrase by what hardly sounded like the notes in the score I had before me. (I saw a lot of musicians in the audience with their modern “urtext” editions open in their laps.) The Allemand of the first suite, in D minor, had many ornaments that were not in the score, making it difficult to follow the music. An added problem was that the pitch was tuned down a half step, which made the piece sound as if it were in C-sharp minor. When I abandoned tracking what I thought Bach had wanted, and simply listened, Moroney’s richly embellished phrases sounded as natural as Art Tatum improvising on a standard tune.

Ornamentation was a main focus of the recital, and what we heard was a version of how the suites might sound if Bach had penned in the various trills, appoggiaturas mordents, and other essential embellishments such as we find in the “Italian” Concerto and other works that have made their way into the standard piano repertoire. Bach never published the suites, though there are copies from which his students played that prove the “original” score to be only a point of departure for an interpretation intended to be different each time the piece was performed: a far cry from the emphasis on “textual” fidelity that we learned in the conservatory. Moroney came up with his own version, which was closer to what Bach expected his students to do when they played this music: to fill it out and to add something of their own to it.

Moroney chose to play the suites in their published order: that is, three in minor keys (the first half of this recital) and three in major keys in the second half. This enabled listeners to compare the sound and effect of instruments made before, during, and after Bach’s lifetime, and to assess how different the music sounded on each instrument, with its own distinctive tuning. The three instruments’ maker, the master keyboard-builder John Phillips (of Berkeley, see review), tuned each one in a different temperament that might have been current in 1721.

Moroney spun out each phrase, adding ornaments like a masterful singer does, expressive down to the smallest detail.

Hearing three suites in minor keys consecutively would have become monochromatic in equal temperament, since that standardizes the keys so as to allow for transposition from one key to another without totally changing the effect produced by the music. (That is, D minor and C minor are essentially the same key, played a whole tone apart.)

The Graebner harpsichord (from 1721) was tuned to D minor in a way that gave me shivers, but it also made the crucial tritone G sharp sound expressive in a way that it can’t when equal temperament is used. The C minor suite played on the Dutch Ruckers instrument had a different color — for me, not darker, as Moroney suggested, but rather a defiant, if melancholy, character that suggested what later composers such as Beethoven and Mozart might come up with in their turn.

Most touching was the third suite, written in the rarely used key of B minor. For this work, Moroney’s choice was a Parisian instrument dating from 1707. It was given center stage, appropriate for these suites inspired by the French taste in music. I don’t know if it was the tuning, the instrument, or the interpretation that convinced me that the harpsichord didn’t have to plink or plunk, but instead could produce a legato sound just like its younger offspring, the piano. It seemed as much at home with Bach as with Couperin, when Moroney spun out each phrase, adding ornaments like a masterful singer does, expressive down to the smallest detail, with none of the devils that are often found in them when played on the monster with 88 teeth.

When Moroney came to the suites in the major keys, the contrast was as telling is it was in the minor keys. Here, too, he made the most of the music’s balances and contrasts. The G-major suite allowed him to figuratively let out all the stops, culminating in a gigue full of joy and abandon. Then, to keep the audience from dancing down the aisles after the final E-major suite, Moroney played the Allemande from the first suite that had perplexed me the first time I heard it (almost three hours earlier). This time, it soothed away the shivers. It wasn’t played better, but was heard better.