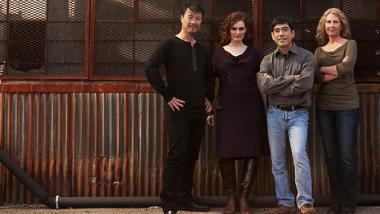 The term “sounding,” with its exploratory meaning and implicit acoustic evocations, appears frequently in contemporary music contexts. The second iteration of Del Sol String Quartet's season exploring alternative performance structures introduces another aspect to the musical use of the term.

Del Sol's “Soundings” format consists of an initial ‘cold’ performance of a single piece (in this case, Pierre Jalbert’s Fourth String Quartet), followed by a live, analytical “breakdown” by the quartet, a discussion of the music’s relationship to the work of a visiting artist (Kevin Chen, author of mesmerizing and microscopic pencil-drawn cityscapes), a short Q&A session to get the audience’s perspective, and finally a second performance of the same piece. The purpose is clear: Do the intervening discussion, the de-mystifying analysis, the artistic parallels and, most importantly, the repeated listening change the way we perceive the music?

Last night’s presentation would suggest so. Though Del Sol’s performances of the piece were similarly committed, my ears reacted most favorably to the second iteration of Pierre Jalbert’s String Quartet No.  4, probably because I already knew where the music was heading at any given time: As with a hike in unfamiliar territory, coming back often feels quicker than getting there. As cellist Kathryn Bates remarked in her analysis of the piece, Jalbert strives to construct his music from a great economy of means, while also maintaining a high energy level throughout.

My ears reacted most favorably to the second iteration of Pierre Jalbert’s String Quartet No.  4, probably because I already knew where the music was heading … The Fourth Quartet is in four movements, each evoking a different physical pattern in both title and treatment of its material: Spiral I, Waveform, Labyrinth, and Spiral II. Under the surface, the work follows a rather conventional structure, with the more emphatic outer movements flanking the quieter second and scherzo-like third. Jalbert’s writing is coloristic yet clear: The textures of the quartet change often, varying from furious unison runs to more intricate contrapuntal constructions, but the results are never muddled. The high energy level, hairpin changes in dynamic and character, and sensible integration of extended techniques evoked Jalbert’s main composition teacher, George Crumb. The Fourth Quartet reminds us that there can be great emotional and affective power in syncretism.

The presentation of Kevin Chen’s remarkable artwork (http://www.kevinbchen.com/) provided the second highlight of the evening after Del Sol’s impeccable performances. Though at times the connection between music and art felt a bit stretched, both the music and Chen’s meticulously detailed drawings share a certain “fractal” quality — the rare ability to withstand scrutiny both from a distance and from much closer inspection.

The audience responded enthusiastically both to the music (even more so after the second reading) and to the format of the evening as a whole. Though individual reactions to the music were varied, including intimations of both “cacophony” and “danger”, audience members remained engaged throughout the two-hour program, and seemed eager to accept the quartet’s invitation to share their feelings. In the Q&A session I tallied an equal number of comments directed towards music and art, including some that addressed how the two related to one another: surely a small statistical sample, but nevertheless a clear indication of the format’s success.